A Metallic Alloy That is Tough and Ductile at Cryogenic Temperatures

A new concept in metallic alloy design – called “high‐entropy alloys” – has yielded a multiple-element material that not only tests out as one of the toughest on record, but, unlike most materials, the toughness as well as the strength and ductility of this alloy actually improves at cryogenic temperatures. This multi-element alloy was synthesized and tested through a collaboration of researchers at the U.S. Department of Energy (DOE)’s Lawrence Berkeley and Oak Ridge National Laboratories (Berkeley Lab and ORNL). 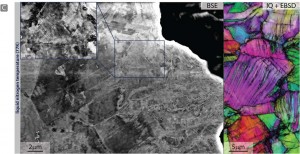 “We examined CrMnFeCoNi, a high‐entropy alloy that contains five major elements rather than one dominant one,” says Robert Ritchie, a materials scientist with Berkeley Lab’s Materials Sciences Division. “Our tests showed that despite containing multiple elements with different crystal structures, this alloy crystalizes as a single phase, face‐centered cubic solid with exceptional damage tolerance, tensile strength above one gigapascal, and fracture toughness values that are off the charts, exceeding that of virtually all other metallic alloys.”

Ritchie is the corresponding author along with ORNL’s Easo George of a paper in Science describing this research. The paper is titled “A fracture resistant high‐entropy alloy for cryogenic applications.” Co-authors are Bernd Gludovatz, Anton Hohenwarter, DhirajCatoor and Edwin Chang.

The tradition of mixing two metals together to create an alloy that possesses properties its constituent elements individually lack goes back thousands of years. In the 4th millennium BC, people began adding tin, a hard metal, to copper, a soft and relatively easy to work metal, to produce bronze, an alloy much stronger than copper. It was later discovered that adding carbon to iron yields the much stronger steel, and the addition of nickel and chromium to the mix yields steel that resists corrosion. Traditional alloys invariably feature a single dominant constituent with minor elements mixed in, and often rely on the presence of a second phase for mechanical performance. 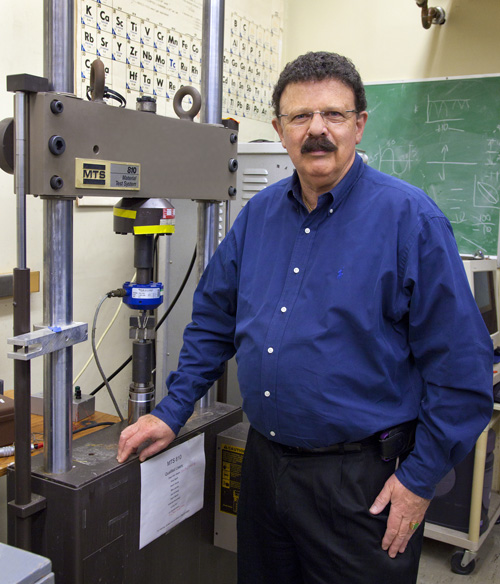 Robert Ritchie, a senior faculty scientist with Berkeley Lab and UC Berkeley, is a recognized authority on the mechanical behavior of materials. (Photo by Roy Kaltschmidt)

“High‐entropy alloys represent a radical departure from tradition,” Ritchie says, “in that they do not derive their properties from a single dominant constituent or from a second phase. The idea behind this concept is that configurational entropy increases with the number of alloying elements, counteracting the propensity for compound formation and stabilizing these alloys into a single phase like a pure metal.”

Although high‐entropy alloys have been around for more than a decade, it has only been recently that the quality of these alloys has been sufficient for scientific study. George and his research group at ORNL combined high‐purity elemental starting materials with an arc-melting and drop-casting process to produce high quality samples of CrMnFeCoNi (chromium, manganese, iron, cobalt and nickel) in sheets roughly 10 millimeters thick. After characterizing these samples for tensile properties and microstructure, the ORNL team sent them to Ritchie and his research group for fracture and toughness characterization. 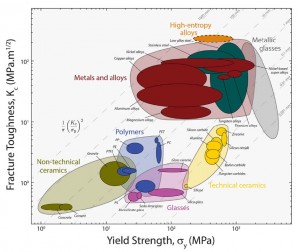 Ritchie, who holds the H. T. and Jessie Chua Distinguished Professor of Engineering chair at the University of California (UC) Berkeley, is an internationally recognized authority on the mechanical behavior of materials.

“As high entropy alloys are single phase, we reasoned that they would be ideal for cryogenic applications, such as storage tanks for liquefied natural gas, hydrogen and oxygen,” he says. “Our work is the first in-depth study that characterizes the fracture toughness properties of this class of alloys, and lo and behold, they are spectacular!”

Tensile strengths and fracture toughness values were measured for CrMnFeCoNi from room temperature down to 77 Kelvin, the temperature of liquid nitrogen. The values recorded were among the highest reported for any material. That these values increased along with ductility at cryogenic temperatures is a huge departure from the vast majority of metallic alloys, which lose ductility and become more brittle at lower temperatures. Ritchie and George believe that the key to CrMnFeCoN’s remarkable cryogenic strength, ductility and toughness is a phenomenon known as “nano-twinning,” in which during deformation, the atomic arrangements in adjacent crystalline regions form mirror images of one another.

“These nano-twins are created when the material undergoes plastic deformation at cryogenic temperatures,” Ritchie says. “This represents a mechanism of plasticity in addition to the planar-slip dislocation activity most metals undergo at ambient temperatures. The result of nano-twinning deformation is a continuous strain hardening, which acts to suppress the localized deformation that causes premature failure.”

Ritchie notes that the mechanical properties of CrMnFeCoNi and other high-entropy alloys have yet to be optimized.

“These high-entropy alloys may well be capable of even better properties,” he says.

This research was supported at both Berkeley Lab and ORNL by the DOE Office of Science.

For more about the research of Robert Ritchie go here

For more about the research of Easo George go here