A Family’s Lost Story Found, and the Sephardic Studies Initiative

For Devin Naar, the Sephardic Studies Initiative is not just a valuable historical archive; it has also been a personal journey revealing an untold family story from the years of the Third Reich.

Naar’s part of the story began about 10 years ago, when as an undergraduate at Washington University he grew interested in the history of Turkey and Greece, which for centuries until World War I was part of the Ottoman Empire. His family comes from Salonica, a port city in Northern Greece.

Now a UW assistant professor of Jewish Studies and of history, Naar told the story in his Thomson Hall office, cluttered with old books and boxes of documents and artifacts lent him for the growing Seattle Sephardic Treasures digital archive. It’s all part of the Stroum Jewish Studies Program‘s larger Sephardic Studies Initiative, which seeks to establish a program for the study, teaching and perpetuation of Sephardic Jewish culture and the Ladino language. The UW is an appropriate place for such an initiative; Seattle is the third-largest community of Ladino-speaking background in the United States.

“I was very curious to find out what happened to my grandfather’s brother Salomon,” who remained in Greece initially when the Nazis rounded up Jews throughout Europe in the late 1930s. “I knew only that this great-uncle of mine had been lost during the war, but I wanted to know more.” 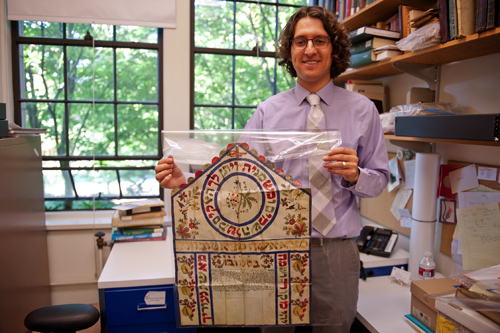 Devin Naar holds an 1897 wedding contract from Tekirdag, Turkey, written in Hebrew and Aramaic. Many Sephardic Jews in Seattle trace their roots to Tekirdag and other parts of the former Ottoman Empire. Naar is gathering examples of Sephardic Jewish books and documents in Hebrew, Turkish and especially Ladino, for the Sephardic Studies Initiative and archive. Document courtesy of Rabbi Solomon Maimon.

No family members had documentation from those years except another great-uncle, who offered a few old letters. “But you’re not going to be able to read them,” he warned Naar. “I can’t even read them!” Sure enough, Naar couldn’t make them out either.

The lettering was described as Spanish, “but it was written in this very peculiar script that I couldn’t even begin to decipher,” Naar said. A rabbi friend he consulted said the script, which read right to left, was not Hebrew but Arabic.

It was in fact, Naar learned, the Ladino language, also known as Judeo-Spanish, or Judezmo, historically written and spoken by Sephardic Jews. And its resemblance to Spanish is no coincidence; Ladino was the language of Jews expelled from Spain in 1492, who came to settle in Turkey, Greece and throughout the Mediterranean Basin.

Naar said there’s a reason why his rabbi friend thought the script Arabic: “The Jews were living in such close proximity to the Ottoman Empire, with Muslims, for 500 years and Islam was the dominant religion in that part of the world. The Hebrew letters, which anyhow are very much like Arabic letters — took on an Arabic sort of flair.” 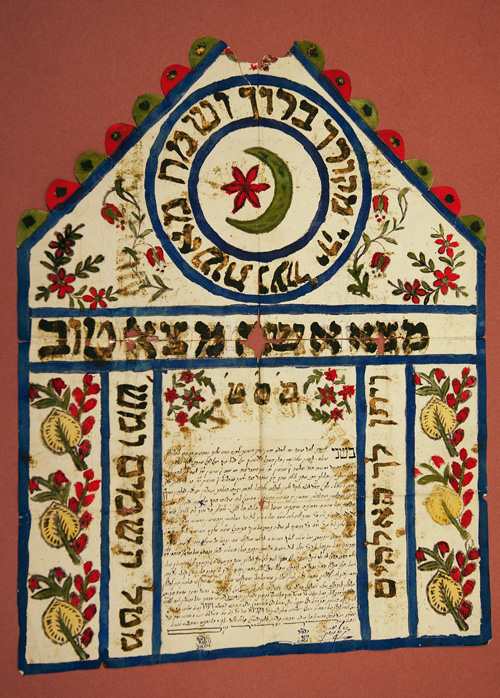 A wedding contract from 1919, also from Tekirdag, Turkey and written in Hebrew and Aramaic. Devin Naar notes what looks like an Islamic star and crescent atop the design; Sephardic Jews long lived in relative harmony with the Ottoman Empire. Document courtesy of Rabbi Solomon Maimon.

As a child Naar had heard Ladino phrases from his grandfather, but even most elders no longer spoke or read the language. “Unfortunately, this is typical of a lot of languages, especially in that part of the world. For the immigrant generation there was a lot of pressure to adapt to American life and to speak English,” Naar said.

“So the knowledge of the Hebrew scripts began to fade. And now there was nobody who could read some of these documents that their own parents or grandparents had written.”

Naar found an old book with a diagram of the Sephardic Hebrew alphabet used to write in Ladino and decoded the letters, translating them into modern Hebrew, then to English. He said he did it like playing Hangman, with underscores standing in for unknown letters.

“It was like decoding the Rosetta Stone, to fill it out. And sure enough — this series of letters told precisely what happened to my family during the war.”

The story, he said, came from a family friend who survived Auschwitz, who told it to another friend who then wrote to Naar’s great-grandfather. “And for 60 or 70 years that story sort of lay — untold.” 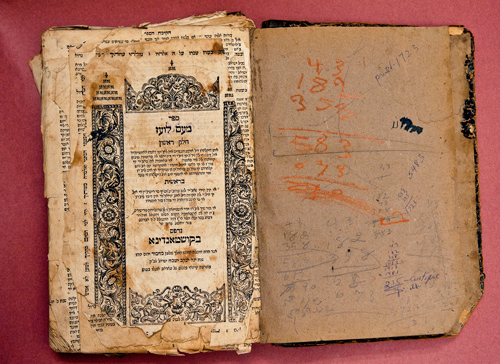 An 1823 book from Istanbul titled Meam Loez. The first book in Ladino with a popular explanation of Jewish and Sephardic culture and traditions, presented in the form of a commentary on the Bible’s book of Genesis. Courtesy of Congregation Sephardic Bikur Holim. Image credit: Mary Levin

The letters told of family members’ fates under Nazi occupation: “Where they were living, what they were doing in the final weeks,” Naar said. “That my great-uncle, for example, was put in charge of distributing yogurt and milk to the old and sick before they were deported to Auschwitz. He wound up being one of the last members of the Jewish community still living in that city because that turned out to be his responsibility.

“They were deported in June 1943 on the seventeenth of nineteen cattle car transports that took nearly 50,000 Jews from Salonica straight to Auschwitz.”

Salomon’s wife, Esther, and young son, Benny, were sent to the gas chambers at Auschwitz upon arrival; he and his teenage daughter, Shelly, labored in work camps for several months.

“According to the letters, they were even able to arrange a final meeting, a last chance for father and daughter to exchange a few words,” Naar said, before Shelly, too, was sent to her death. Salomon met the same fate that autumn.

Reading the translated letters was a powerful experience for family, Naar said, but it “gave a sense of closure to this part of the family’s story.

“And it provides some hard documentation about the final days — not only of my particular family’s experience in Greece, but the whole community.”