A doctor’s love affair with medicine and literature

For Anna Reisman, M.D., it was a summer novel that pointed her to a career in medicine.

As a rising Yale senior and English major with no thought of becoming a doctor, she read Thomas Mann’s classic 1924 novelThe Magic Mountain, a tale of tuberculosis patients at a Swiss sanatorium. Surprised by her own fascination with the disease, she went on to read physician-writers Oliver Sacks, M.D., Richard Selzer, M.D., HS ’61, and Lewis Thomas, M.D. Soon she was a medical student at New York University.

Now an associate professor of internal medicine, Reisman (pronounced “Reeseman”) has maintained a connection to literature that affects how she teaches and practices medicine. In essays for such publications as The Atlantic, Slate, and The New York Times, she has pointed out the problem with overly dapper doctors, defended nurse practitioners who want to practice primary care without physician oversight, and described her own reluctance to set foot in a hospice for the first time. (Its homey coziness surprised her.) She has even explored the troubling ethics of writing about patients. 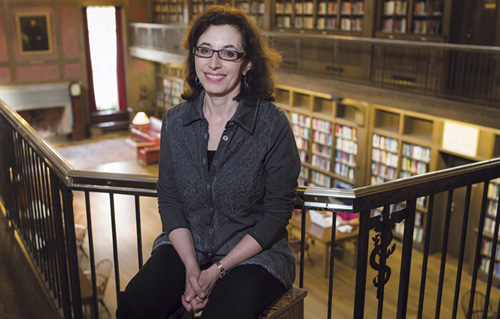 A novel about tuberculosis patients sparked Anna Reisman’s interest in medicine. She now leads the Yale Program for the Humanities in Medicine. (Photo by Terry Dagradi)

With Lisa Sanders, M.D. ’97, HS ’00, associate professor of medicine and author of the Diagnosis column in The New York Times Magazine, she co-directs the Yale Internal Medicine Residency Writers Workshop. The workshop guides residents as they turn patient care experiences into thoughtful narratives. Reisman also directs the standardized patient program through the Teaching and Learning Center and plays flute with a klezmer group, the Nu Haven Kapelye, and the Yale Medical Symphony Orchestra.

In March, Reisman became the new director of the Yale Program for Humanities in Medicine, inheriting the post from Thomas P. Duffy, M.D. Duffy had led the program since 1999 upon the retirement of founding director Howard Spiro, M.D., an English major, published writer, and tireless advocate for intertwining the humanities and medicine. What began as a lecture series has under Duffy’s tenure added a Yale Medical Symphony Orchestra and figure drawing classes at the School of Art. The idea is to provide what Duffy calls “an opportunity to frolic in all of those realms, to keep alive that spirit of passion” for the humanities during medical training. Reisman intends to weave humanities right into the medical curriculum, exposing students to film, literature, and visual arts that give the science a human context. She also plans to create a social media presence for the 32-year-old program.

“Of course it does!” Reisman said. “You read a great novel and you really empathize with the characters, you get into their heads, you see things from their perspective. What better training to be a good doctor than to be able to imagine what a patient is going through!”

On the lookout for lecturers and collaborators across the university, Reisman is combing places like the School of Drama, the Whitney Humanities Center, and the Yale Center for British Art. “There’s so much stuff going on!” she said.

Reisman has the right disposition for her work, said Geoffrey Liu, M.D. ’15, who developed a reflective writing workshop for third-year medical students and worked with Reisman to train students to succeed him. Reisman, he said, combines an easygoing manner with “bluntness and a kind of candor that I’ve really come to appreciate.”

Born at Yale-New Haven Hospital and raised in Hamden, Reisman earned her English degree at Yale. She graduated from medical school in 1993, then did her residency in primary care internal medicine at NYU Medical Center/Bellevue Hospital, staying an extra year as chief resident. Then, she and medical school classmate Cary Gross, M.D., professor of medicine, moved to Baltimore; they married in 1998 and returned to Connecticut a year later.

Since then, Reisman has worked in primary care for the VA Connecticut Healthcare System in West Haven (including a four-year interlude of house calls). The move brought them closer to Reisman’s sister Lisa, who had just been diagnosed with a glioblastoma. (Lisa Reisman’s memoir of surviving that tumor, 5 Months 10 Years 2 Hours, was published this spring; she recently delivered a lecture as part of the humanities program.)

People sometimes profess surprise when an English major chooses a career in medicine. But to Reisman, the connection between the two fields is obvious. “More than anything else, medicine is about the human condition‒people, their lives and experiences,” she said, “and that’s what the humanities are about.”