A Direct Look at Graphene

Perhaps no other material is generating as much excitement in the electronics world as graphene, sheets of pure carbon just one atom thick through which electrons can race at nearly the speed of light – 100 times faster than they move through silicon. Superthin, superstrong, superflexible and superfast as an electrical conductor, graphene has been touted as a potential wonder material for a host of electronic applications, starting with ultrafast transistors. For the vast potential of graphene to be fully realized, however, scientists must first learn more about what makes graphene so super. The latest step in this direction has been taken by researchers with the U.S. Department of Energy (DOE)’s Lawrence Berkeley National Laboratory (Berkeley Lab) and the University of California (UC) Berkeley.

Michael Crommie, a physicist who holds joint appointments with Berkeley Lab’s Materials Sciences Division and UC Berkeley’s Physics Department, led a study in which the first direct observations at microscopic lengths were recorded of how electrons and holes respond to a charged impurity – a single Coulomb potential – placed on a gated graphene device. The results provide experimental support to the theory that interactions between electrons are critical to graphene’s extraordinary properties.

“We’ve shown that electrons in graphene behave very differently around charged impurities than electrons in other materials,” Crommie says. “Some researchers have held that electron-electron interactions are not important to intrinsic graphene properties while others have argued they are. Our first-time-ever pictures of how ultra-relativistic electrons re-arrange themselves in response to a Coulomb potential come down on the side of electron-electron interactions being an important factor.” 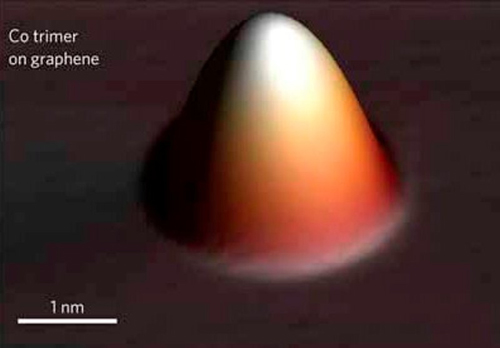 This zoom-in STM topograph shows one of the cobalt trimers placed on graphene for the creation of Coulomb potentials – charged impurities – to which electrons and holes could respond. (Image courtesy of Crommie group)

Graphene sheets are composed of carbon atoms arranged in a two-dimensional hexagonally patterned lattice, like a honeycomb. Electrons moving through this honeycomb lattice perfectly mimic the behavior expected of highly relativistic charged particles with no mass: think of a ray of light that is electrically charged. Because this is the same behavior displayed by highly relativistic free electrons, charge-carriers in graphene are referred to as “Dirac quasiparticles,” after Paul Dirac, the scientist who first described the behavior of relativistic fermions in 1928.

“In graphene, electrons behave as massless Dirac fermions,” Crommie says. “As such, the response of these electrons to a Coulomb potential is predicted to differ significantly from how non-relativistic electrons behave in traditional atomic and impurity systems. However, until now, many key theoretical predictions for this ultra-relativistic system had not been tested.” 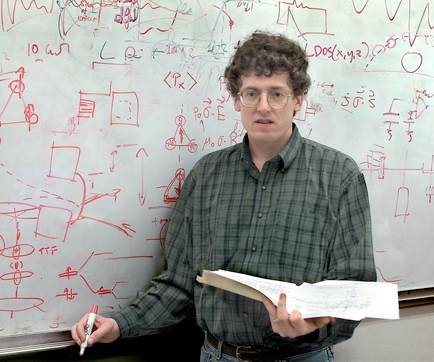 Working with a specially equipped scanning tunneling microscope (STM)in ultra-high vacuum, Crommie and his colleagues probed gated devices consisting of a graphene layer deposited atop boron nitride flakes which were themselves placed on a silicon dioxide substrate, the most common of semiconductor substrates.

“The use of boron-nitride significantly reduced the charge inhomogeneity of graphene, thereby allowing us to probe the intrinsic graphene electronic response to individual charged impurities,” Crommie says. In this study, the charged impurities were cobalt trimers constructed on graphene by atomically manipulating cobalt monomers with the tip of an STM.”

The STM used to fabricate the cobalt trimers was also used to map (through spatial variation in the electronic structure of the graphene) the response of Dirac quasiparticles – both electron-like and hole-like – to the Coulomb potential created by the trimers. Comparing the observed electron–hole asymmetry to theoretical simulations allowed the research team to not only test theoretical predictions for how Dirac fermions behave near a Coulomb potential, but also to extract graphene’s dielectric constant.

“Theorists have predicted that compared with other materials, electrons in graphene are pulled into a positively-charged impurity either too weakly, the subcritical regime; or too strongly, the supercritical regime,” Crommie says. “In our study, we verified the predictions for the subcritical regime and found the value for the dielectric to be small enough to indicate that electron–electron interactions contribute significantly to graphene properties. This information is fundamental to our understanding of how electrons move through graphene.” 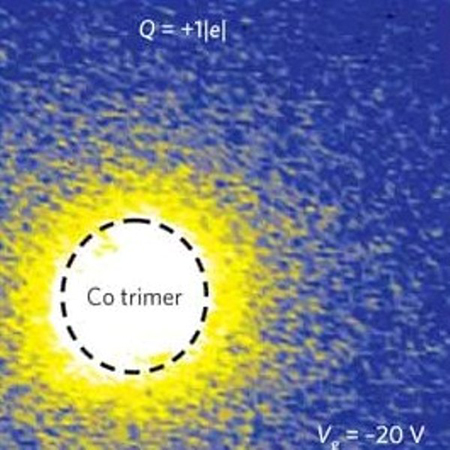 This research was supported by the DOE Office of Science, the Office of Naval Research, and the National Science Foundation.