A cheaper drive to ‘cool’ fuels

University of Delaware chemist Joel Rosenthal is driven to succeed in the renewable energy arena.

Working in his lab in UD’s Department of Chemistry and Biochemistry, Rosenthal and doctoral student John DiMeglio have developed an inexpensive catalyst that uses the electricity generated from solar energy to convert carbon dioxide, a major greenhouse gas, into synthetic fuels for powering cars, homes and businesses.

The research is published in the June 19 issue of the Journal of the American Chemical Society.

Gold and silver represent the “gold standard” in the world of electrocatalysts for conversion of carbon dioxide to carbon monoxide. But Rosenthal and his research team have pioneered the development of a much cheaper alternative to these pricey, precious metals. It’s bismuth, a silvery metal with a pink hue that’s a key ingredient in Pepto-Bismol, the famous pink elixir for settling an upset stomach. 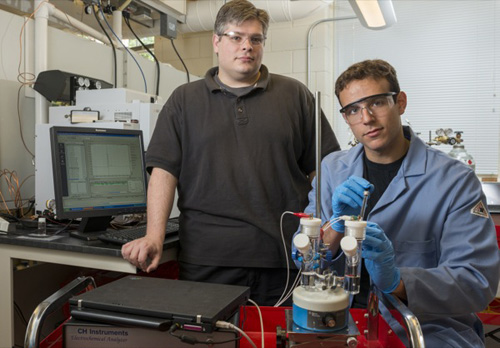 Joel Rosenthal (left) and doctoral student John DiMeglio at work in Rosenthal’s lab in the UD Department of Chemistry and Biochemistry. Photo by Kathy F. Atkinson

“Most catalysts do not selectively make one compound when combined with carbon dioxide — they make a whole slew,” Rosenthal explains. “Our goal was to develop a catalyst that was extremely selective in producing carbon monoxide and to power the reaction using solar energy.”

Many of us hear ‘”carbon monoxide” and think “poison.”

“It’s true that you do not want to be in a closed room with carbon monoxide,” Rosenthal says. “But carbon monoxide is very valuable as a commodity chemical because it’s extremely energy rich and has many uses.”

Carbon monoxide is used industrially in the water-gas shift reaction to make hydrogen gas. It also is a prime feedstock for the Fischer-Tropsch process, which allows for the production of synthetic petroleum, gasoline and diesel.

Commercial production of synthetic petroleum is under way or in development in a number of countries, including Australia and New Zealand, China and Japan, South Africa and Qatar.

Rosenthal says that if carbon dioxide emissions become taxed in the future due to continuing concerns about global warming, his solar-driven catalyst for making synthetic fuel will compete even better economically with fossil fuels.

“This catalyst is a critically important linchpin,” Rosenthal says. “Using solar energy to drive the production of liquid fuels such as gasoline from CO2 is one of the holy grails in renewable energy research. In order to do this on a practical scale, inexpensive catalysts that can convert carbon dioxide to energy-rich compounds are needed. Our discovery is important in this regard, and demonstrates that development of new catalysts and materials can solve this problem. Chemists have a big role to play in this area.”

Rosenthal credits a scientific article published during America’s first energy crisis in the 1970s for piquing his interest in bismuth. At that time, many researchers were examining the conversion of carbon dioxide to carbon monoxide using electricity and metal electrodes. The research went bust in the early 1980s when federal funding dried up. Rosenthal picked up the trail and blazed a new one.

“With this advance, there are at least a dozen things we need to follow up on,” Rosenthal notes. “One successful study usually leads to more questions and possibilities, not final answers.”

Rosenthal’s lab will be operating at full tilt this summer, exploring some of those questions. And his research team of seven will have some company. Through the American Chemical Society’s Project SEED summer research program, budding scientists from nearby Newark High School will join Rosenthal’s team for further study of this bismuth-based catalyst.