A new method for analyzing the chemical composition of stars may help scientists winnow the search for Earth 2.0.

Yale University researchers Debra Fischer and John Michael Brewer, in a new study that will appear in the Astrophysical Journal, describe a computational modeling technique that gives a clearer sense of the chemistry of stars, revealing the conditions present when their planets formed. The system creates a new way to assess the habitability and biological evolution possibilities of planets outside our solar system. 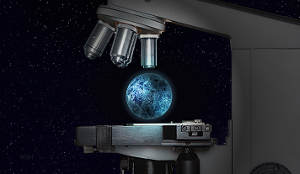 “This is a very useful, easy diagnostic to tell whether that pale blue dot you see is more similar to Venus or the Earth,” said Fischer, a Yale professor of astronomy. “Our field is very focused on finding Earth 2.0, and anything we can do to narrow the search is helpful.”

Lead author Brewer, a postdoctoral researcher at Yale, has used the technique previously to determine temperature, surface gravity, rotational speed, and chemical composition information for 1,600 stars, based on 15 elements found within those stars. The new study looks at roughly 800 stars, focusing on their ratio of carbon to oxygen, and magnesium to silicon.

Brewer explained that understanding the makeup of stars helps researchers understand the planets in orbit around them. “We’re getting a look at the primordial materials that made these planets,” he said. “Knowing what materials they started with leads to so much else.”

For instance, the new study shows that in many cases, carbon isn’t the driving force in planetary composition. Brewer found that if a star has a carbon/oxygen ratio similar to or lower than that of our own Sun, its planets have mineralogy dominated by the magnesium/silicon ratio. About 60% of the stars in the study have magnesium/silicon ratios that would produce Earth-like compositions; 40% of the stars have silicate-heavy interiors.

“This will have a profound impact on determining habitability,” Brewer said. “It will help us make better inferences about which planets will be ones where life like ours can form.”

In addition to helping identify planets more like Earth, the study sheds light on the occurrence of “diamond” planets — planets with a high carbon-to-oxygen abundance. Brewer and Fischer found that it is “exceedingly rare” to find a star with a carbon/oxygen ratio high enough to produce a diamond planet. In fact, the new data reveals that the star of the much discussed diamond planet, 55 Cancri e, does not have a high enough carbon/oxygen ratio to support its nickname.

“They’re even more rare than we thought a few years ago,” Fischer said. “Diamond planets truly are the most precious.”