2020 Hollywood Diversity Report: A different story behind the scenes

Film roles were more plentiful for women and people of color in 2018 and 2019, but underrepresentation remains for writers and execs

Oscars viewers this weekend might see the predominantly white nominees and think Hollywood still has a diversity problem. 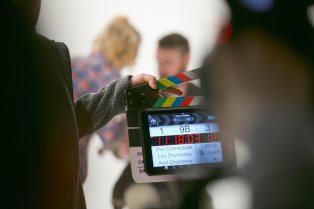 But there are indications that the film industry is starting to get the message that diversity sells. The numbers of acting jobs for women and people of color are getting closer to being proportionate with the U.S. population overall, according to UCLA’s latest Hollywood Diversity Report.

The report focuses on the top-grossing films of 2018 and 2019. (A related report covering the past two seasons of television data will be published in April.)

Although minorities were largely ignored for Academy Award nominations, films with diverse casts continued to resonate with increasingly diverse audiences, a fact emphasized by each new edition of the Hollywood Diversity Report.

When it comes to key jobs in the film world, the seventh annual report tells the story of two Hollywoods.

“As of 2019, both women and minorities are within striking distance of proportionate representation when it comes to lead roles and total cast,” said Darnell Hunt, dean of the UCLA College division of social sciences and the report’s co-author. “But behind the scenes, it’s a very different story. That begs the question: Are we actually seeing systematic change, or is Hollywood just appealing to diverse audiences through casting, but without fundamentally altering the way studios do business behind the camera?”

Women make up about 50% of the U.S. population and minorities slightly more than 40%. A majority of the nation’s population will be minorities by 2050, according to U.S. Census estimates.

The numbers of acting roles for women and people of color in film have been progressively increasing since UCLA researchers first started tracking data. And results from the last two years of film are heartening.

The researchers analyzed 139 films with the highest gross global ticket receipts of 2018. They found that 41.0% of lead roles went to women and 26.6% to minorities. And among all acting roles in those films, 40.4% went to women and 30.9% to people of color.

When it comes to writing and directing, minorities and women have gained a little ground on their white and male counterparts in recent years, but still have a long way to go.

In 2018, just 7.1% of the directors of top-grossing films were women and 19.3% were people of color. In 2019, women posted meaningful gains to reach 15.1%, but minorities directed just 14.4% percent of the top box office movies, a slight increase over recent years.

“Getting writing, directing and acting jobs is a critical step for women and people of color because success in the industry is largely driven by the credits you have,” Hunt said.

The statistics for people of color in key entertainment roles are particularly striking considering their visibility, buying power, ideas and experiences in the population at large — including as consumers of entertainment. People of color accounted for at least 50% of domestic ticket sales for six of the top 10 films in 2018. In 2019, minorities bought at least 50% of tickets for nine of the top 10 films.

In 2018, films with casts made up of 21% to 30% minority actors had the highest median global ticket receipts. In 2019, the films that tended to perform the best at the box office were even more diverse, with casts in the 41% to 50% minority range.

Despite that buying power, the analysis suggests, fundamental structural change in Hollywood is not yet evident.

Further down the org chart, gender equality is somewhat better: Studios’ film unit heads are 86% white, but only 69% male.

“What’s being green-lit matters,” said the report’s co-author, Ana-Christina Ramon, director of research and civic engagement for the UCLA College division of social sciences. “And although the industry is changing in front of the camera, white men are still doing the overwhelming majority of the green-lighting and making the major decisions behind the scenes at the studios.”

That phenomenon largely dictates what stories get told and who gets the all-important jobs in front of and behind the camera, she said.

The report’s authors in 2019 published an analysis of inclusivity practices across several entertainment sectors. That report included a five-part strategy that could help push the needle on Hollywood diversity.