“Visual Studio 11” is an integrated solution that helps individuals and development teams of any size to be productive and focused, to collaborate seamlessly with colleagues, and to turn their ideas into exceptional and compelling applications. 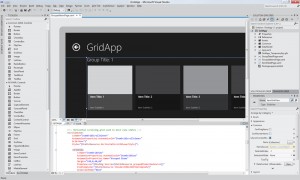 “We undertook building ‘Visual Studio 11’ with a focus on offering today’s software developer the very best environment for efficiently building applications — for both businesses and consumers,” said S. Somasegar, corporate vice president, Developer Division, Microsoft. “In addition, our work has been highly influenced by the proliferation of devices and a passion for enabling developers to focus on building high-quality, modern applications with data that seamlessly flows from one device to another, easily incorporating intuitive interfaces such as touch and voice. We want developers to be productive in building such applications, whether they’re using C++, JavaScript, Visual Basic or C#.”

The .NET Framework 4.5 enables developers to productively build responsive, scalable and efficient client and server applications. “Developers building services for Windows Server and Windows Azure will get the tools they need to effectively harness the power of the cloud,” Somasegar said.

Get Into the Zone

“Visual Studio 11” offers an improved developer experience that includes a simplified user interface designed to keep developers focused on their work, with fewer distractions and easier access to the tools they need.

“We know that developers can lose a lot of their time just orienting themselves to a project and the tools they are working with,” said Jason Zander, corporate vice president, Visual Studio, Microsoft. “By refreshing the user interface, we’ve made much of the core functionality easier for a developer to find and use quickly, helping maintain concentration.”

A number of features were added and improvements made to “Visual Studio 11,” including the following:

Software Development From Start to Finish

“Visual Studio 11” Team Foundation Server (TFS) Beta provides the collaboration hub at the center of the Visual Studio ALM solution. From start to finish, teams can track projects through each stage of software development, from keeping tabs on version control to continually deploying software updates. The new ALM capabilities help ensure diverse team members integrate as one in the development cycle.

TFS automates the software delivery process and gives developers the tools they need to effectively manage software development projects throughout the IT lifecycle.

In addition to Beta, Microsoft is announcing Team Foundation Server Express, which is a great way to try out TFS. TFS Express includes core developer features, such as Source Code Control, Work Item Tracking, Build Automation and Agile Taskboard, and is available for free to individuals and teams of up to five members.

With.NET Framework 4.5, Microsoft .NET has been enhanced significantly to enable developers to be as productive as possible while building rich, reliable and high-performance software in managed code. These enhancements were made across the Framework, including in the following:

Beyond such areas, many additions have gone into improving the .NET Framework end to end. There are improvements from regular expression processing to better support for compression standards, enhanced support for HTML5, developer productivity enhancements in Entity Framework, optimized mobile experiences through ASP.NET, and more, ensuring .NET Framework 4.5 has something new for all developers building for the client and the cloud.