*Greenhouse gases are playing a role in changes, say scientists*

Newly detected rising sea levels in parts of the Indian Ocean, including the coastlines of the Bay of Bengal, the Arabian Sea, Sri Lanka, Sumatra and Java, appear to be at least partly a result of human-induced increases of atmospheric greenhouse gases, says a study led by the University of Colorado at Boulder.

The sea level rise — which may aggravate monsoon flooding in Bangladesh and India — could have far-reaching impacts on both future regional and global climate.

The key player in the process is the Indo-Pacific warm pool, an enormous, bathtub-shaped area of the tropical oceans stretching from the east coast of Africa west to the International Date Line in the Pacific. The warm pool has heated by about 1 degree Fahrenheit, or 0.5 degrees Celsius, in the past 50 years, primarily caused by human-generated increases of greenhouse gases, said Han.

“Our results from this study imply that if future anthropogenic warming effects in the Indo-Pacific warm pool dominate natural variability, mid-ocean islands such as the Mascarenhas Archipelago, coasts of Indonesia, Sumatra and the north Indian Ocean may experience significantly more sea level rise than the global average,” said Han of CU-Boulder’s atmospheric and oceanic sciences department. 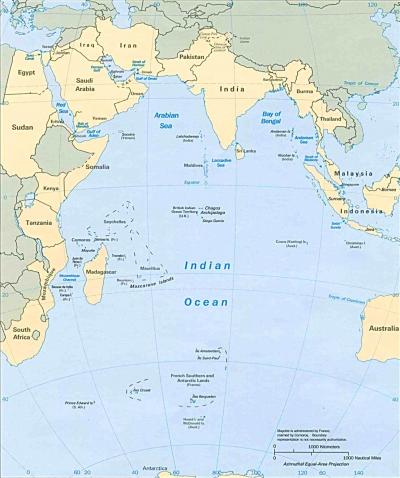 About the image above: Rising sea levels in parts of the Indian Ocean appear to be at least partly the result of rising greenhouse emissions. Image Credit: University of Colorado.

A paper on the subject was published in this week’s issue of Nature Geoscience. Co-authors included Balaji Rajagopalan, Xiao-Wei Quan, Jih-wang Wang and Laurie Trenary of CU-Boulder, Gerald Meehl, John Fasullo, Aixue Hu, William Large and Stephen Yeager of the National Center for Atmospheric Research in Boulder, Jialin Lin of Ohio State University, and Alan Walcraft and Toshiaki Shinoda of the Naval Research Laboratory in Mississippi.

While a number of areas in the Indian Ocean region are showing sea level rise, the study also indicated the Seychelles Islands and Zanzibar off Tanzania’s coastline show the largest sea level drop. Global sea level patterns are not geographically uniform, and sea rise in some areas correlate with sea level fall in other areas, said NCAR’s Meehl.

The Indian Ocean is the world’s third largest ocean and makes up about 20 percent of the water on Earth’s surface. The ocean is bounded on the west by East Africa, on the north by India, on the east by Indochina and Australia, and on the south by the Southern Ocean off the coast of Antarctica.

The patterns of sea level change are driven by the combined enhancement of two primary atmospheric wind patterns known as the Hadley circulation and the Walker circulation. The Hadley circulation in the Indian Ocean is dominated by air currents rising above strongly heated tropical waters near the equator and flowing poleward, then sinking to the ocean in the subtropics and causing surface air to flow back toward the equator.

The Indian Ocean’s Walker circulation causes air to rise and flow westward at upper levels, sink to the surface and then flow eastward back toward the Indo-Pacific warm pool. “The combined enhancement of the Hadley and Walker circulation form a distinct surface wind pattern that drives specific sea level patterns,” said Han.

“Our new results show that human-caused changes of atmospheric and oceanic circulation over the Indian Ocean region — which have not been studied previously — are the major cause for the regional variability of sea level change,” wrote the authors in Nature Geoscience.

The new study indicates that in order to document sea level change on a global scale, researchers also need to know the specifics of regional sea level changes that will be important for coastal and island regions, said NCAR’s Hu. Along the coasts of the northern Indian Ocean, seas have risen by an average of about 0.5 inches, or 13 millimeters, per decade.

“It is important for us to understand the regional changes of the sea level, which will have effects on coastal and island regions,” said Hu.

The study was funded by a number of organizations, including NCAR, the National Science Foundation, NASA and the U.S. Department of Energy.

Source: University of Colorado at Boulder