*Thousands of retailers around the world are opening their doors at midnight for the launch of the long-awaited “Gears of War 3,” a dramatic, action-packed finale to the Xbox 360 sci-fi warfare trilogy.*

REDMOND, Wash. – “Gears of War 3,” the dramatic, action-packed, much-anticipated conclusion to the blockbuster Xbox 360 trilogy, marches out at midnight.

Fans who have been waiting for the final chapter in the sci-fi warfare saga are lining up around the world to buy the game, which goes on sale at 12 a.m. on Tuesday, September 20. With 20,000 launch locations, the release is the franchise’s biggest, stretching from New Zealand to Times Square.

“There’s a guy who’s been in line for nearly a week in New York City,” said Chris Wynn, lead producer for “Gears of War” at Microsoft Studios. “We, too, couldn’t be more excited about this launch. The story is epic, and the game is stunning. The visuals are better than any game you’re going to find on Xbox or any other console.” 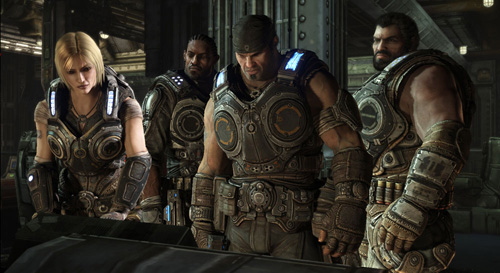 Apart from visual advances, the game is loaded with new features ranging from new maps and dedicated servers on Xbox LIVE to new modes of play (including beast, where you can play as the monster enemy) and new characters (for the first time, playable female characters).

Amid War, a Father and Son Story

The final installment of “Gears of War 3” opens quite some time after the conclusion of “Gears of War 2,” and life on the fictional planet Sera is hanging by a thread. Society has all but collapsed, and the troops of Delta Squad are in a desperate fight to save what’s left of humanity from an unyielding subterranean enemy, the Locust Horde.

Where the first two installments of “Gears of War” focused on battles and the war, the third has a more cinematic, human element, though Wynn is careful not to give too much away (game reviewers were also asked not to include too many spoilers).

“Ultimately the game is a father and son story,” Wynn said. 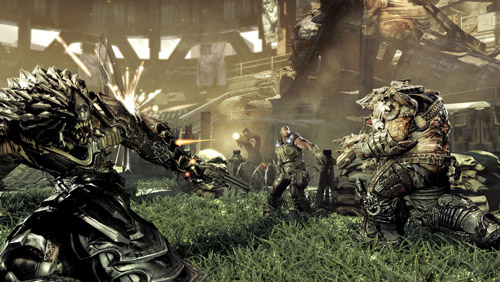 "Gears of War 3" offers players several new game play options and modes, including the chance to play in “beast mode” as the game's monsters rather than the human heroes. Image credit: Microsoft

In “Gears of War 2” players learn more about the elder Fenix’s ties to the monster enemies and to other mysterious things happening on the planet. At the start of “Gears of War 3,” Marcus Fenix finds out his father is still alive and claims to have a way to stop the oncoming battle with the Locus Horde.

Drawing on the father and son relationship shifts the series to a more personal level.

“In the first two games, the story was about battles and wars; it was emotional, but that wasn’t the focus,” Wynn said. “This has more drama. You’re trying to survive with a small group of your friends, trying to see if you can find a future. That’s what it’s all about.” 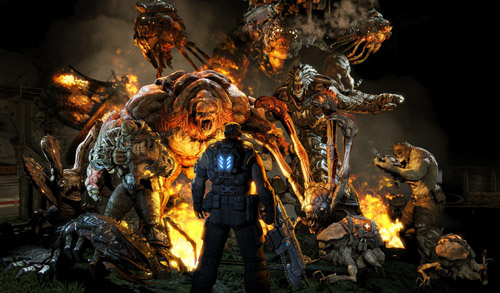 In the dramatic conclusion to the "Gears of War" trilogy, players will make a last stand to save the fictional planet Sera from obliteration. Image credit: Microsoft

One of the characters, Anya Stroud, may be familiar – she was the voice on the radio for the first two games advising the team of their next objective. Dire times forced the dispatcher to armor up and join the rest of the Delta Squad on the front lines, Wynn said.

“That’s one thing we’re pretty proud of. There are no tight or skimpy clothes as in other games; the female characters are every bit as tough and gutsy as their male counterparts – they are equals in our game,” Wynn said. “You wouldn’t think it when you look at ‘Gears of War,’ but we have lots of female fans.”

It’s also by far the longest “Gears of War” campaign, literally giving players more bang for their buck. Typically, role-playing games (RPGs) offer eight hours of play, 10 hours “if you’re stretching it,” Wynn said. Depending on how it’s played, “Gears of War 3” is a 12- to 14-hour game.

“Sixty dollars for a piece of entertainment is pretty expensive, but what you get for that with ‘Gears of War 3’ is pretty expansive,” Wynn said.

The conclusion of the “Gears of War” trilogy marks a milestone not only for the franchise and gamers, but for Xbox 360. “Gears of War” launched in 2006, and became the first title to demonstrate the promise of the then-new Xbox 360 console, said Guy Welch, a Microsoft senior product manager.

“It was the first high-definition console to come to market, and all of a sudden here was this game, sensory overloaded with incredible graphics,” Welch said of the game, developed by Epic Games and published by Microsoft Studios. “It was the first game to define that next-generation console.” 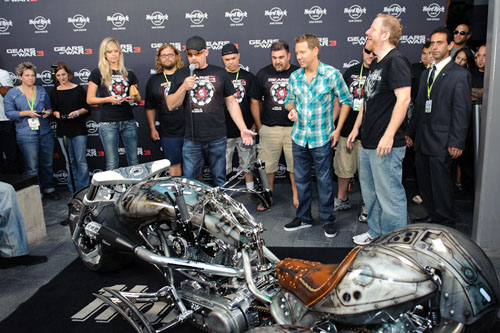 As with most modern blockbuster gaming series, once “Gears of War” was a star, it wasn’t long until it went supernova. The “Gears of War” franchise now includes not only the games and the wildly popular cooperative play experience on Xbox LIVE, but New York Times bestselling novels, comic books, merchandise and more. Custom motorcycle builder Paul Teutul, Jr. even built a “Gears of War”-inspired bike on his Discovery Channel show “American Chopper.”

“His goal was to create something big, heavy, and believable to the degree that it could fit in inside the ‘Gears of War’ universe,” Welch said. “I think he outdid himself.”

Launch Is the Beginning

Welch said he expects more than 4 million people will be playing “Gears of War 3” by week’s end, 75 percent of whom will play the cooperative and multiplayer modes on Xbox LIVE.

“Gears of War 2” sold 2 million copies in its first weekend, and many of those 2 million players tried to log on to Xbox LIVE all at once. “Gears of War 3” will have dedicated servers all over the world to guarantee a smooth launch. 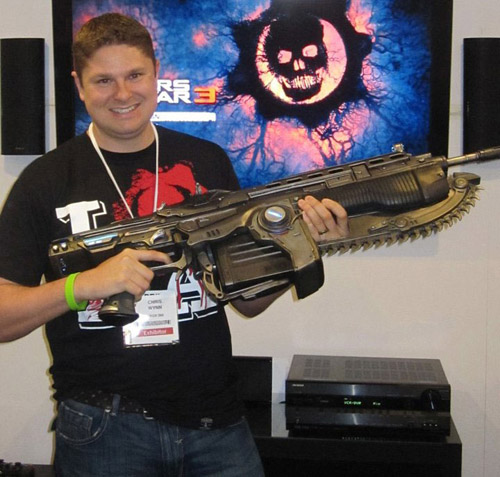 It’s the first major game to make the leap of offering players dedicated server space they can connect and play from, Wynn said, and he suspects other games will follow suit.

Even after the launch events have concluded, the work is hardly done for the “Gears of War” team.

“It used to be, back in the day, that you’d be waiting for a game to come out, and you’d get the cartridge, and you’d play it and that was it – maybe you’d get another game next Christmas,” Welch said.

Now, the team is constantly working on title updates (they’ve released six for “Gears of War 2” since it launched) as well as downloadable content (DLCs), new maps to play, new co-operative experiences and more.

“It’s never been a better time to be a gaming fan,” Welch said. “And we want to continue to put great experiences out there for them.”