This Beetle Uses Eggs as Shields Against Wasps

*New UA research has discovered that seed beetles from the desert Southwest shelter their broods from attacking parasitic wasps under a stack of dummy eggs.*

They lead modest lives among the palo verde, mesquite and acacia trees throughout the Southwestern U.S., laying their eggs on seed pods and defending the survival of their offspring against the parasitic wasp species that attacks their eggs before their young can develop.

They are the seed beetles Mimosestes amicus, living all around us in the trees of Tucson, and yet remaining all but invisible to our eyes – or nearly so. 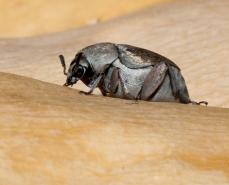 Now, doctoral candidate Joseph Deas in the University of Arizona’s Graduate Interdisciplinary Program in Entomology and Insect Science, along with his faculty advisor Martha Hunter in the department of entomology, is peering into their world through his microscope and has discovered something novel: The beetles, whose eggs frequently are parasitized by the wasp Uscana semifumipennis, have a strategy to protect their offspring that goes beyond a helpful habit.

“They’re stacking their eggs in order to protect them from these parasitic wasps,” said Deas, whose research appears in the Proceedings of the Royal Society B on Sept. 14.

The eggs have eyes

The wasps, called parasitoids because they kill their host rather than just taking advantage of its resources, deposit their own eggs inside the beetles’. The wasp larva gets a head start in life and develops before the beetle larva, hijacking the beetle egg yolk for its own nourishment.

“You can tell when an egg has been parasitized because the egg will start to darken and blacken,” said Deas. “The beetle larva by that time will never form because all of the yolk is going inside the wasp larva. And then you can see little red eyes in there; the beetles don’t have red eyes. It looks very evil.”

As often happens in science, Deas came upon the discovery of M. amicus’ strategy through the course of a different investigation. 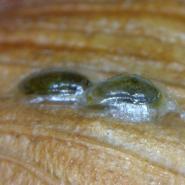 Two seed beetle egg stacks. The blackened parts of the eggs tell of a wasp hijacking them to raise their own larvae. But once pried open... (Photo: Joseph Deas)

“Then I saw that they were attacking these other eggs from M. amicus that were much larger.”

Wondering how the wasp larvae would do in the apparently larger eggs, Deas investigated and was surprised to find that the larvae were not doing well at all.

“I didn’t understand why. My idea was that there’s just too much yolk in there. There are instances where wasps have been developing in size and they sort of drown because there’s still yolk around them and they can’t pupate in moisture, they can’t turn into a cocoon. I thought that was the reason.”

The moment of truth

“I was looking at the eggs under the microscope, and I saw when I looked on the side that it seemed like there was another egg underneath it,” said Deas. “I took some really small insect pins and started to scrape around the edge of the egg. Eventually I had a layer come off.” 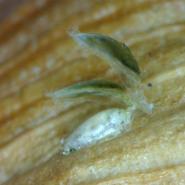 ...the egg stack reveals a third egg, left unharmed under the protection of the upper two. (Photo: Joseph Deas)

M. amicus’ apparently larger egg turned out to be not one egg, but a whole stack of beetle eggs laid one on top of the other. “I was thinking: ‘Why would they do that?'” said Deas. “And I thought about the wasp.”

“I went out in the field, collected a bunch of seedpods and brought them back to the lab.”

Deas measured the parasitism on eggs laid individually versus on bottom eggs in a stack to see whether having one or more eggs on top was sufficient to protect the bottom eggs. And sure enough, Deas found the individual eggs were parasitized much more frequently than those eggs that were shielded at the bottom of a stack.

On the verge of what he thought was a new discovery, Deas was shocked to find that scientists before him had found the same thing in the 1920s.

“The discovery of the beetle laying eggs on top of each other is not a novel discovery,” said Deas.  “But they thought it’s a way to compete: That the beetles are stacking eggs on top of other beetles’ eggs to crush them. They didn’t actually do any lab experiments to prove that those eggs are from exactly the same female.”

As if one potential co-discoverer wasn’t enough to dampen the spirit, another scientist had found the same egg-stacking behavior in the 1970s. “He did the same thing that I did,” said Deas. “I almost thought that I had been scooped 40 years ahead of time.”

But there was one big difference between Deas’s work and that of his predecessor in the field. “He found like I did that some of the eggs didn’t actually hatch into anything,” said Deas. “He didn’t specify which eggs they were.”

They were the eggs on the top of the stacks, the ones most likely to be attacked by a wasp.

“I found that a lot of the top eggs didn’t result in any beetles, even if they weren’t parasitized. So then I started thinking, ‘Are these real eggs; what are these?'”

Now certain that he was headed into uncharted territory, Deas turned to investigating why the top eggs in a stack failed to produce any larvae. 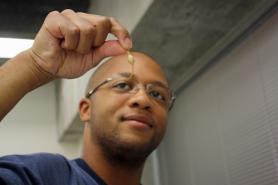 Doctoral candidate Joseph Deas holds up a seed pod on which the beetles lay their eggs. Once the larvae hatch they burrow into the pod and feed on the seeds inside. (Photo: Beatriz Verdugo/UANews)

“The beetles are somehow able to reduce the size of these eggs before they lay them. They’re able to control how big that top egg is so that they can save resources.”

Deas believes that the top eggs simply don’t have enough nutrients to fully develop a beetle – or a wasp.

“If a wasp attacks it, the wasp larvae have reduced survivorship,” said Deas. “At least a quarter of the wasps will die.”

“I’ve seen the beetles lay from one to three eggs on top of a bottom egg. These are all shield eggs: They all have this flat, sort of shield-type look to them. For eggs with three shields on top, I’ve never found a bottom egg that was attacked. Those with just one egg on top get attacked much more than those with two eggs on top or three,” said Deas.

Then Deas switched the treatments, removing the wasps from the first group and adding wasps to the group that had been parasitoid-free. “I wanted to see how plastic the beetles were. Could they adjust according to what risk there was?” said Deas. “And sure enough they could.”

The beetles can adjust how often they stack their eggs depending on the risk of parasitism, but some beetles seem to have a preferred strategy regardless of the risk.

“It looked like there are those beetles that lay tons of stacks no matter what level of parasitism they are exposed to, or they only lay a few stacks. Part of what I’m going to try to do next is figure out whether or not there are different strategies,” said Deas.

“It’s such a common organism that does a really curious thing,” said Deas. “You walk by on campus getting your coffee, and you just don’t realize that there’s this intriguing thing happening. You know a lot about the larger, more charismatic organisms, but a lot of these smaller species have cool traits that are just aching to be discovered.”

Deas’s research is funded by the National Science Foundation’s Doctoral Dissertation Improvement Grant, the Center for Insect Science and by an MGE@MSA grant from Arizona State University