Yoga accessible for the blind with new Microsoft Kinect-based program

In a typical yoga class, students watch an instructor to learn how to properly hold a position. But for people who are blind or can’t see well, it can be frustrating to participate in these types of exercises.

Now, a team of University of Washington computer scientists has created a software program that watches a user’s movements and gives spoken feedback on what to change to accurately complete a yoga pose.

“My hope for this technology is for people who are blind or low-vision to be able to try it out, and help give a basic understanding of yoga in a more comfortable setting,” said project lead Kyle Rector, a UW doctoral student in computer science and engineering. 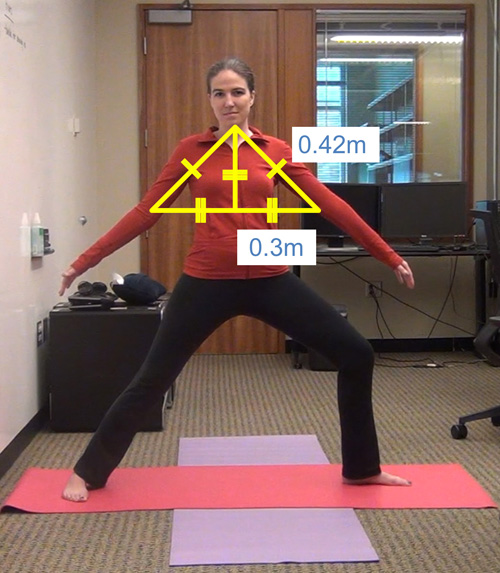 An incorrect Warrior II yoga pose is outlined showing angles and measurements. Using geometry, the Kinect reads the angles and responds with a verbal command to raise the arms to the proper height. Image credit: Kyle Rector, UW

The program, called Eyes-Free Yoga, uses Microsoft Kinect software to track body movements and offer auditory feedback in real time for six yoga poses, including Warrior I and II, Tree and Chair poses. Rector and her collaborators published their methodology in the conference proceedings of the Association for Computing Machinery’s SIGACCESS International Conference on Computers and Accessibility in Bellevue, Wash., Oct. 21-23.

Rector wrote programming code that instructs the Kinect to read a user’s body angles, then gives verbal feedback on how to adjust his or her arms, legs, neck or back to complete the pose. For example, the program might say: “Rotate your shoulders left,” or “Lean sideways toward your left.”

The result is an accessible yoga “exergame” – a video game used for exercise – that allows people without sight to interact verbally with a simulated yoga instructor. Rector and collaborators Julie Kientz, a UW assistant professor in Human Centered Design & Engineering, and Cynthia Bennett, a research assistant in computer science and engineering, believe this can transform a typically visual activity into something that blind people can also enjoy.

“I see this as a good way of helping people who may not know much about yoga to try something on their own and feel comfortable and confident doing it,” Kientz said. “We hope this acts as a gateway to encouraging people with visual impairments to try exercise on a broader scale.” 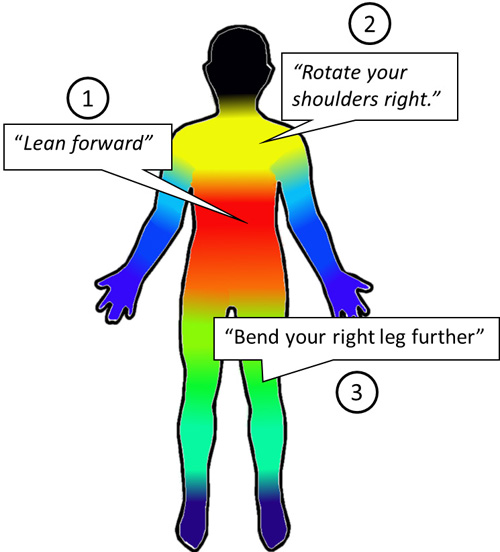 Each of the six poses has about 30 different commands for improvement based on a dozen rules deemed essential for each yoga position. Rector worked with a number of yoga instructors to put together the criteria for reaching the correct alignment in each pose. The Kinect first checks a person’s core and suggests alignment changes, then moves to the head and neck area, and finally the arms and legs. It also gives positive feedback when a person is holding a pose correctly.

Rector practiced a lot of yoga as she developed this technology. She tested and tweaked each aspect by deliberately making mistakes while performing the exercises. The result is a program that she believes is robust and useful for people who are blind.

“I tested it all on myself so I felt comfortable having someone else try it,” she said.

Rector worked with 16 blind and low-vision people around Washington to test the program and get feedback. Several of the participants had never done yoga before, while others had tried it a few times or took yoga classes regularly. Thirteen of the 16 people said they would recommend the program and nearly everyone would use it again.

The technology uses simple geometry and the law of cosines to calculate angles created during yoga. For example, in some poses a bent leg must be at a 90-degree angle, while the arm spread must form a 160-degree angle. The Kinect reads the angle of the pose using cameras and skeletal-tracking technology, then tells the user how to move to reach the desired angle.

Rector opted to use Kinect software because it’s open source and easily accessible on the market, but she said it does have some limitations in the level of detail with which it tracks movement.

Rector and collaborators plan to make this technology available online so users could download the program, plug in their Kinect and start doing yoga. The team also is pursuing other projects that help with fitness.

The research was funded by the National Science Foundation, a Kynamatrix Innovation through Collaboration grant and the Achievement Rewards for College Scientists Foundation.