On a summer evening in 1993, Professor John Ostrom, a paleontologist at the Yale Peabody Museum of Natural History, had a chance to see one of his discoveries spring to life.

“Jurassic Park,” Steven Spielberg’s film adaptation of Michael Crichton’s bestselling novel, was setting box-office records. Both the filmmaker and the novelist had consulted Ostrom. The tale’s primary dinosaur antagonists, the vicious Velociraptors, were based on Deinonychus — a Cretaceous predator whose fossilized remains Ostrom discovered in Montana in 1964.

Ostrom was joined at the cinema in North Haven by his Peabody colleagues Copeland McClintock and Rudolph Zallinger, the museum’s longtime artist-in-residence who had painted the “Age of Reptiles” mural in The Great Hall of Dinosaurs.

McClintock, the assistant to the Peabody’s director at the time, says Ostrom, who died in 2005, enjoyed the movie.

“One scene that got a big guffaw from him was when the T. rex reached over the [toilet] and ate that lawyer,” says McClintock, referencing a scene in which a Tyrannosaurus rex devours the theme park’s attorney as he cowers in a restroom. “That gave us all a good laugh.”

Twenty-two years later, “Jurassic World,” the fourth film in the franchise, is another box-office smash. When Ostrom described his research to Crichton in the late 1980s, he probably did not realize that he was contributing to a pop-culture juggernaut. 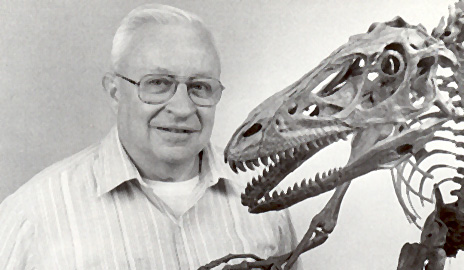 On Aug. 29, 1964, Ostrom rose from his sleeping bag in Montana’s Big Horn Basin prepared to conclude a third season of fieldwork. His assistant, Grant Meyer, took him on a final tour of about a dozen potential excavation sites for the following season. While walking between two of those sites along the base of a butte he spotted a three-inch-long claw protruding from the ground. 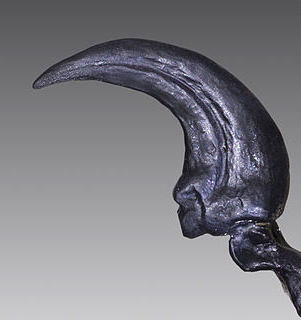 “As I leapt forward past Grant, I nearly knocked him down the slope in my anxiety to see it closely,” Ostrom wrote in a 1993 article in Discovery, a magazine once published by the Peabody. “Obviously, it was very different from anything we had seen before. I knew it was something new, and potentially very important.”

They spent the rest of the day on their hands and knees probing and scraping the ground with the few tools they had on hand. They managed to excavate parts of an arm, a hand, and a hind foot. At day’s end, they packed up the specimens and returned to their camp two hours away. During a sleepless night, Ostrom decided to extend the field season an extra day, which he spent at the site probing for more remains, before embarking on the long drive back to Connecticut.

Ostrom passed a long winter anxious to return to Montana. He would spend the next three summers meticulously exploring the site, slowly carving a quarry into the side of the butte, and making discoveries that would change people’s perception of dinosaurs.

The hind foot the he discovered that first day featured a large, sickle-shaped claw that curved up and outward on its second toe.

Ostrom would later determine that the fearsome claw and other bones belonged to a modest-sized carnivore that lived during the early Cretaceous period. He named the creature Deinonychus, which means “terrible claw” in Greek. The site contained the bones of at least four of these predators along with the skeleton of their prey, Tenontosaurus, a larger, plant-eating dinosaur.

“What he had found was like a 120-million-year-old crime scene,” says Daniel Brinkman, a paleontologist at the Peabody and Ostrom’s former graduate student.

Ostrom worked the crime scene like a forensic investigator. After completing three years in the field, he spent another couple of years analyzing and reconstructing the specimens at the Peabody before publishing his findings in 1969.

He described Deinonychus as an aggressive and athletic raptor that slashed and disemboweled its prey with those distinctive sickle-claws. Its front claws were like grappling hooks for grasping prey while the hind claws did their brutal work. Its long and unusually rigid tail provided stability and balance, like a tightrope walker’s pole, during chases and leaping attacks.

According to Ostrom, this aggressive behavior suggested that Deinonychus had a high-rate of metabolism and was warm-blooded. His work questioned the traditional view of dinosaurs as plodding, cold-blooded reptiles. It helped revive a 19th-century theory that at least some species of dinosaurs were much more like non-flying birds than lizards. Ostrom would become a leading proponent of the link between dinosaurs and birds, a premise that is widely accepted today.

Ostrom’s discoveries, combined with the work of Robert Bakker ’67 (who studied under Ostrom at Yale) and Gregory Paul, sparked a “dinosaur renaissance” during the 1970s and 1980s, renewing people’s fascination with the long-extinct beasts. Their work caught the attention of an author of bestselling science-fiction novels.

“I was in my office when the telephone rang one morning. ‘Professor Ostrom, this is Michael Crichton,’” Ostrom told The New York Times in a 1997 interview. “And we had a very interesting conversation.”

Ostrom said he had read “The Andromeda Strain,” Crichton’s 1969 novel about the deadly outbreak of an extraterrestrial microorganism, and that the author wanted to learn more about Deinonychus and its physical capabilities.

“I told him what I though this creature might do, or be able to do,” Ostrom said.

Tim White, director of collections and operations at the Peabody, recalls seeing Crichton, who was six-feet, nine-inches tall, meeting with Ostrom at the museum.

“I asked him who the tall guy was he’d been meeting with,” White says. “He didn’t say it was Michael Crichton. He just said it was ‘some writer’ researching a book. John was a very modest that way.”

In the acknowledgements of “Jurassic Park,” which was published in 1990, Crichton lists Ostrom as one of several eminent paleontologists whose work he drew upon.

While the vicious raptor of the novel is strikingly similar to Deinonychus, Crichton renamed it.

“Crichton, in an apologetic way, explained that in the novel he decided to use the name Velociraptor, that I had said was the closest relative to the animal that I had found,” Ostrom told The Times. “He said, ‘It’s more dramatic.’ And I said I recognize that most people don’t understand Greek.”

“Deinonychus is a pretty sexy name when you think about it,” he says. “It means terrible claw. That’s pretty damn dramatic.”

Despite the name change, Ostrom wrote that Crichton had confirmed to him that the fictional Velociraptor was modeled after Deinonychus in “almost every detail.”

He was convinced that “the Terror of Jurassic Park really is Deinonychus parading around under an assumed name.”

Ostrom’s 1993 article in Discovery analyzes whether the physical and mental capabilities of Crichton’s antagonist were true to life. Could Deinonychus bite through steel? Impossible. Did it possess extraordinary leaping ability? Quite possibly. Would it have been able to open doors and gates? Entirely possible — so long as the doors did not require a keycard swipe.

Was Deinonychus as intelligent as the creatures in Crichton’s novel? Ostrom said it is impossible to know, but he pointed out that Deinonychus possessed brain volumes that were much higher proportionally than those of other dinosaurs, most reptiles, and some mammals.

Brinkman says that Steven Spielberg’s production company contacted Ostrom and requested copies of all of his technical papers on Deinonychus.

“I think [Steven Spielberg] is a really talented man who can put these creatures on screen so they look real,” he said in The Times interview.

Brinkman says Ostrom, like a lot of his colleagues, appreciated the storyteller’s need to use artistic license in depicting the dinosaurs. Brinkman mentioned a scene early in the film showing a herd of stampeding Gallimimus being pursued by a hungry T. rex.