Ecosystem Metaphor May Apply to Humans

UA researchers have attracted the attention of the Department of Defense by looking at how organizational ecology may relate to human networks — and even to terrorist organizations.

The world today is more intimate and tightly wound together than ever before. Organizations are linked together in a variety of ways, allowing relationships to form and resources to be exchanged.

Matt Mars of the University of Arizona College of Agriculture and Life Sciences and Judith Bronstein from the UA College of Science have teamed up to better understand the natural properties of the networks that tie together human actors and organizations. The U.S. Department of Defense is interested in their research as a way to analyze terrorist networks.

“Today’s society doesn’t work in isolation,” Mars said. “It’s becoming easier to show who’s connected to who, but knowing how one organization affects another remains a particularly difficult challenge. What actors and groups keep a network together? Who is expendable?” 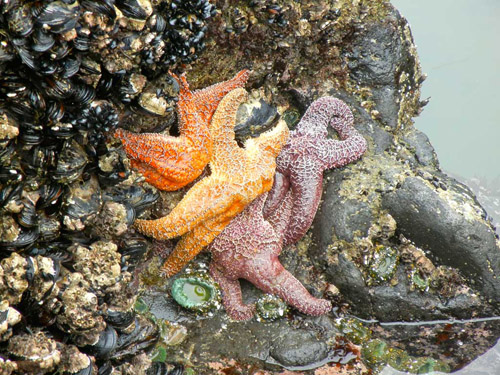 The rocky intertidal, shown here, is one of the ecosystems that ecologists have been studying for decades to learn about how different species interact. (Photo credit: Judith Bronstein)

The researchers are using an organizational ecology model, drawn originally from the biological sciences, to study how groups form and interact. Bronstein’s research focuses on cooperation and insect networks, and Mars’ focuses on charter schools and other human systems.

To gain more insight, Mars and Bronstein are looking at the opportunities and limitations of viewing such networks from the perspective of an “organizational ecosystem metaphor.”

Traditionally used in the study of networks of interacting species in nature, the ecosystem model increasingly is being employed in other disciplines to predict how different groups thrive, interact and extend their influence, or fail.

The work of Mars, an assistant professor of agricultural leadership and communication in the College of Agriculture and Life Sciences, and Bronstein, a University Distinguished Professor of Ecology and Evolutionary Biology, stems from an initial collaboration that included Bob Lusch, Muzzy Professor of Entrepreneurship and professor of marketing in the UA’s Eller College of Management.

“Ecological terms have been popping up in the nonscientific literature more and more — symbiosis, ecosystem, things like that. Some of these are really powerful concepts,” said Bronstein, a member of the UA’s BIO5 Institute. “Could ecological concepts and analyses enrich fields like business, education and policymaking by suggesting new and testable hypotheses, for instance, about what makes systems stable or fragile? We’ve become convinced that they can.”

According to Mars, there is a need for a better understanding of how organizations and actors connect and function within complex environments.

Interest by Department of Defense

The U.S. Department of Defense Office of Net Assessment agrees. After reading a paper by Mars, Bronstein and Lusch, the office invited Mars and Bronstein to discuss the organizational ecosystem metaphor during a counterterrorism workshop in January in Alexandria, Virginia.

The office is looking for new ways to study how the systems that support and create violent instability come together — and how they fall apart.

“It was an engaging and challenging conversation,” Mars said. “Terrorism is a global problem, so they want to understand the systems that are being put together and how they form and keep connections, and want to be able to forecast how that’s going to change over the next 10 years.”

Mars and the ecologist Bronstein want to keep it relevant to both the human and biological sides.

“The metaphor tries to take principles from biological systems that are parallel to human systems and give you different ways to understand how human systems function, how they thrive or how they fail,” Bronstein said.

For example, Bronstein and Mars are studying the emergence of the Arizona charter school system, and how different systems affect the success or failure of the schools within. The UA Center for Insect Science initially funded this interdisciplinary project.

“You can understand the charter school system as an ecosystem, where schools are species, and these schools have partnerships with other species,” Mars said. “They may compete, but they share an environment that is structured by common policy and resource pools. The overarching goal is for schools to thrive rather than fail, and using the ecosystem model is an effective way of understanding the environment that largely determines success and failure.”

Within the agricultural education department, the model also holds promise for looking at local and regional food systems.

“Exploring local food systems as ecosystems is just one example of how the metaphor may connect to agriculture, but its application is really diverse, so you can go from charter schools, to terrorists, to food systems,” Mars said.

Looking for Tools to Use

Once the metaphor has been fully developed, then it has the power to become a decision-making tool.

“That’s why the DOD wants to talk to us,” Mars said. “They want tools.”

“Our college has always contributed to America’s national security primarily by ensuring a safe and abundant food supply,” said Shane Burgess, vice president for veterinary sciences and Cooperative Extension and CALS dean. “But today, we’re taking this one step further and using the principles of biological networks to address the immediate national security threat we all face: world terrorism.”

Following the Net Assessment meeting, Mars and Bronstein have been invited to develop an essay that explores some of the potential ways in which the ecosystem metaphor may influence counterterrorism strategy and policy. If published, it will be distributed to policymakers in Washington, D.C.

“It is very exciting to know that the work we are doing at the University of Arizona could have a positive impact on the nation’s effort to prevent organized violence and bring greater stability to the world,” Mars said.