The most common lineages of fish found today in oceans, lakes, and rivers evolved about the same time as mammals and birds, a new Yale University-led study shows.

The comparative genetic analysis of more than 200 fish species, reported the week of Aug. 6 in the Proceedings of the National Academy of Sciences, gave an earlier than expected evolutionary birthday to well-known teleost — or ray-finned — fish such as salmon, bass, or tuna.

The analysis also shows that the very earliest lineages of living teleost fish were eels and bonefishes, not tropical freshwater bonytongue fish as some scientists had proposed.

“Half of all animals that have backbones are ray-finned fish, but we know little about their evolutionary history in contrast to other vertebrate lineages like frogs, lizards, birds, and mammals,” said Thomas Near of the Department of Ecology and Evolutionary Biology at Yale and lead author of the paper. “Fish are usually viewed as primitive in origin, but we are learning that most of the familiar living lineages of fish arose more recently — during what we might call the Second Age of Fishes.”

The Devonian period, 415 to 355 million years ago, is known as the Age of Fishes and saw the appearance of many types of fish such as bony fishes, sharks, skates, and rays, as well lineages known only from the fossil record. The living lineages of teleost fish — the major group of ray-finned fish — were thought to have appeared some 150 million years ago. The Yale study suggests the evolutionary age of living teleosts may be closer to 300 million years old. 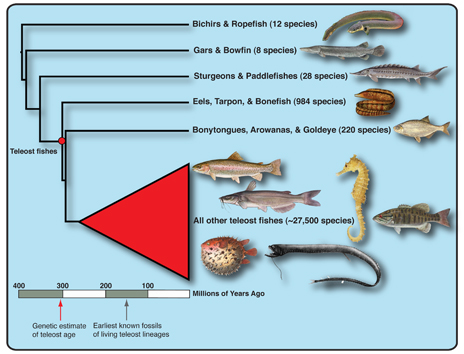 A genetic analysis by Yale researchers show that the earliest ray-finned fishes called teleosts are more ancient than thought and appeared almost 300 million years ago. However, the much more diverse and familiar species of teleosts arose at about the same time as birds and mammals — about 120 to 60 million years ago. (Illustration by Thomas Near, Alex Dornburg, and Ron Eytan)

However, the analysis shows the great majority of teleost lineages found today appeared much later — in the Cretaceous through the Paleocene, some 120 to 60 million years ago, along with the first mammals and birds. Near and his team are investigating whether the extinction event some 65 million years ago that killed off the last of the dinosaurs also may have facilitated teleost fishes to radiate throughout the world’s oceans and rivers, just as it led to rapid expansion of mammalian and bird diversity.

“The new family tree of ray-finned fish comes close to completing the book on the evolutionary relationships of vertebrates,” Near said.

Other Yale authors on the study are Ron I. Eytan, Alex Dornburg, and Kristen L. Kuhn.

The study was funded by the Yale Peabody Museum of Natural History and the National Science Foundation.