Across the Border: Children of U.S.-born Latinas More Likely to Get Retina Cancer, Study Finds

In a large epidemiologic study, researchers at UCLA’s Jonsson Cancer Center found that babies of U.S.-born Latinas are at higher risk for retinoblastoma — a malignant tumor of the retina which typically occurs before the age of 6 — than children of Mexico-born mothers.

The study, which focused on infants born in California, also found that children of older fathers and those born to women with sexually transmitted diseases were at greater risk for the disease, as were children from multiple-birth pregnancies, which may indicate an increased risk from in vitro fertilization. Those findings confirmed the results of several smaller studies.

The research team used data from the California Cancer Registry and examined all retinoblastoma cases reported from 1988 to 2007, said Julia Heck, first author of the study and an assistant researcher at the UCLA Fielding School of Public Health. Using California data allowed the researchers to cull information from a large and diverse population that included many Latinas.

The study appears in the early online edition of the journal Cancer Causes and Control. 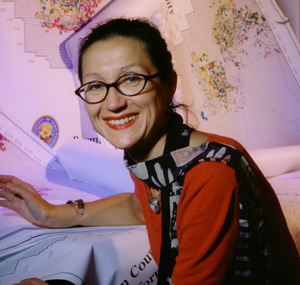 “One of the most interesting things we found in this study that hasn’t been reported is the differences among Latina mothers and the risk being lower among mothers born in Mexico,” Heck said. “We believe this is because women born in Mexico who come to the United States and have children have very healthy behaviors in the perinatal period, immediately before and after giving birth.”

The study’s senior author, Dr. Beate Ritz, a Jonsson Cancer Center researcher and a professor of epidemiology and environmental health sciences at the Fielding School, said Latinas born in the U.S. are less likely to exhibit the healthy pregnancy behaviors found in foreign-born Latinas. For example, they generally have poorer diets and are more likely to smoke and drink during pregnancy, which could contribute to the risk of retinoblastoma.

“Compared to U.S.-born Latinas, immigrant women born in rural Mexico often have even less education and lower socioeconomic status, but they retain healthier diets and perinatal habits, which may be correlated to lower risk of disease in their children,” said Ritz, who chairs the Fielding School’s epidemiology department.

The team chose to study retinoblastoma because its causes remain poorly understood. The researchers sought to examine associations between perinatal factors and cancer risk in California children. They identified 609 retinoblastoma cases, 420 that occurred in one eye, 187 that occurred in both eyes and two for which it was unknown whether one or both eyes were involved. They randomly selected more than 200,000 control children without cancer from the California birth rolls. The source of most of the risk-factor data in this study was information from birth certificates, Ritz said.

Retinoblastoma is the result of the loss or mutation of both alleles of the RB1 tumor-suppressor gene. About 40 percent of cases are considered hereditary, and most of these present as bilateral disease — that is, in both eyes.