Organisms discovered by Yale undergraduates growing within fungi in the Amazon Rainforest can degrade polyurethane, a findings that may lead to innovative ways to reduce waste in the world’s landfills.

The paper, accepted for publication in July by the journal Applied and Environmental Microbiology, is the work of undergraduates who participated in Yale’s Rainforest Expedition and Laboratory course, funded by the Howard Hughes Medical Institute. 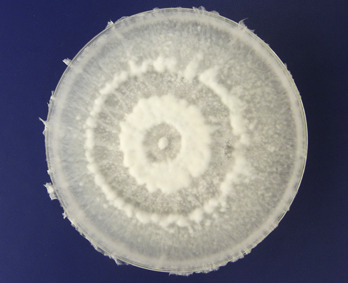 Organism within fungi in a rainforest plant shows evidence of bioactivity when exposed to polyurethane. Image credit: Yale University

“This shows amazing things can happen when you let undergraduates be creative,” said Kaury Kucera, postdoctoral researcher in the department of molecular biophysics and biochemistry and co-instructor of the course.

Students taking the course search for and collect organisms called endophytes found in rainforest plants and then take them back to New Haven to test them for biological activity.   Students analyze the endophytes that show biological activity to see whether they might have other medical or other social uses.

On the 2008 trip to Equador, student Pria Anand, Class of 2010, decided to see if the endophytes she collected could be used in bioremediation.  In a rudimentary test, Anand showed a chemical reaction did take place when an endophyte she found was introduced to plastic. 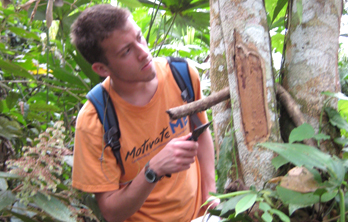 Yale undergrads, including Jon Russell, Class of 2011, discovered organisms with Amazon Rainforest plants which can degrade plastics. The undergrads' discovery is featured in the journal Applied and Environmental Microbiology. Image credit: Yale University

A second undergraduate of the same class, Jeffrey Huang, analyzed endophytes collected by other students on the 2008 trip to find those that broke down chemical bonds most efficiently.

Jonathan R. Russell, Class of 2011 then discovered that one family of endophytes identified by Huang showed the most promise for bioremediation. Russell went on to identify the enzyme that most efficiently broke down polyurethane.

While other agents can degrade polyurethane, the enzyme identified by Yale students holds particular promise because it also degrade plastic in the absence of oxygen — a prerequisite for bioremediation of buried trash.

Also, a new group of undergraduates are analyzing newly discovered endophytes collected during recent rainforest trips to see if they can also degrade more intractable plastics such as polystyrene.