A research team led by Yale University scientists has for the first time determined the original colors of an ancient moth, based on nearly 50 million-year-old fossils from Germany.

The discovery could help scientists learn the colors of a wide variety of long-extinct creatures, including birds, fishes, and other insects, and shed light on color’s function and evolution.

“We can work out what they looked like and what they used the colors for,” said Yale researcher Maria E. McNamara, the project’s principal investigator. Results will be published Nov. 15 in the online journal PLoS Biology.

Fossils rarely preserve evidence of original color, and scientists know the colors of very few ancient creatures, an impediment to fuller understanding of their behavior and how they communicated with other organisms. 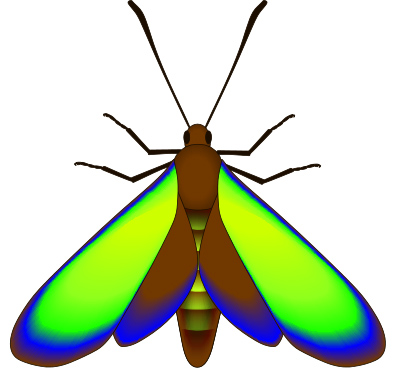 A research team led by Yale University scientists has reconstructed the colors of a 47 million-year-old day-flying moth based on anatomical details in fossilized scales. Scientists know the actual colors of few ancient creatures. The discovery could help them learn the colors of a wide variety of long-extinct creatures, including birds, fishes and other insects, shedding light on color’s function and evolution. Image credit: Yale University

Using electron microscopy and other techniques, McNamara’s interdisciplinary team examined fossilized scales of daytime moths that lived more than 47 million years ago. The fossils were originally found at the Messel oil shale pit near Frankfurt, a celebrated source of high-quality fossils.

Evidence from anatomical details preserved in the scales helped establish the structural color of their forewings — a matte, non-iridescent yellow-green. Elsewhere the moth was brown, blue, and green-cyan.

McNamara said the ancient day moth’s colors appear to have served defensive purposes. When it was eating and vulnerable to attack, the colors warned off predators; when the moth was at rest in leafy habitats, the colors provided camouflage.

“The living members of this group of day-flying moths are often brightly colored, and this fossil shows that color evolved for protection in these insects at least 50 million years ago,” said co-author Derek E. G. Briggs, the Yale paleontologist whose lab hosted the moth research.

Other recent research by Briggs, who is the director of Yale’s Peabody Museum of Natural History, led to the first full-color reconstruction of the plumage of a feathered dinosaur. Other recent McNamara research revealed the colors of ancient beetles.

For the moth research, McNamara’s team included both paleontologists and physicists. Other authors are Heeso Noh and Hui Cao of Yale’s Department of Applied Physics; Patrick J. Orr of University College Dublin’s School of Geological Sciences; and Sonja Wedmann of the Senckenberg Forschungsinstitut und Naturmuseum in Germany, which provided the fossil specimens.

The research was supported by a Marie Curie International Mobility Fellowship through University College Dublin and the National Science Foundation.