ANN ARBOR, Mich.— A University of Michigan biologist and his colleagues have found that the strategies used by the tiny C. elegans roundworm to control its motions are remarkably similar to those used by the human brain to command movement of eyes, arms and legs.

C. elegans, a nematode about 1 millimeter in length, is one of the most widely used animals in biological research. In the Nov. 11 edition of the journal Cell, U-M’s Shawn Xu and his colleagues show that the roundworm uses two neural circuits that respectively act as a gas pedal and a brake release to change direction. The gas pedal circuit has been known for years and was thought to be the only neural pathway involved.

Using a multidisciplinary approach, Xu’s team has found that a second, previously unknown neural pathway is also involved. It acts like releasing the brake pedal on your car to allow motion. The human brain uses both the gas pedal and brake release circuits to command the movement of eyes, arms and legs.

“Our results show that distantly related organisms with anatomically distinct nervous systems may adopt similar strategies for motor control,” Xu said. “This new information about the nematode’s brain can be used to provide insights into how the human brain—and the brains of many other organisms—works,” said Xu, a research associate professor at the U-M Life Sciences Institute and an associate professor of molecular and integrative physiology at the Medical School. 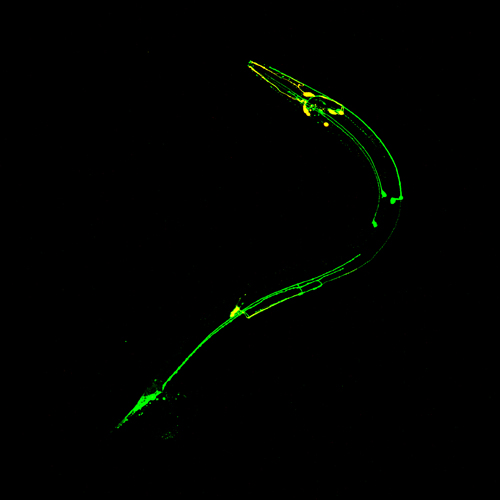 Green and yellow fluorescence mark the processes and cell bodies of some C. elegans neurons. Image courtesy of the Xu lab

The C. elegans nervous system contains 302 nerve cells called neurons, while the human brain contains about 100 billion neurons. C. elegans is the only organism whose entire nervous system—all the neurons and the connections between them—has been mapped.

In the past, scientists have relied on that neural wiring map to draw conclusions about how these worms control movement. Some of the conclusions turned out to be incorrect, because “the structural map is not the whole story,” Xu said.

“Our current view on the circuitry needs to be significantly revised,” he said.

To get a more complete picture, it’s necessary to observe and record the activity of individual neurons while the animal is engaged in a specific type of behavior, such as changing its direction of motion.

To accomplish this, the Xu lab developed an instrument called CARIBN (for Calcium Ratiometric Imaging of Behaving Nematodes) that allows researchers to simultaneously image the activity of individual neurons while recording the animal’s behavior.

Using this tool, the researchers first confirmed that several important neurons, called command interneurons, are part of the gas pedal circuit that was believed to be solely responsible for motion changes.

To identify the unknown circuit, Xu and his colleagues examined other key C. elegans neurons, including one called RIM, which had been suggested to act upstream of the command interneuron-mediated circuit to regulate changes of motion.

The researchers used lasers to eliminate RIM and found that the frequency of motion changes increased significantly. The finding suggested that RIM normally acts to inhibit movement—like a car brake—and that suppressing RIM activity releases the brake and allows the worm to move.

To test this idea, the researchers took a look at worms lacking the command interneurons AVA, AVD and AVE. Then they inhibited activity of RIM. They confirmed that suppressing RIM activity releases the neural brake pedal and enables movement.

This finding revealed the presence of a previously unknown, RIM-mediated parallel circuit that promotes motion changes in C. elegans. The brake pedal circuit identified in this study is functionally analogous to those found in humans and other mammals.

“The significance of these findings is that Dr. Xu and his colleagues have established the worm C. elegans as the premier model system for identifying the neural circuitry that mediates behavior in animals in their natural state—freely moving,” said Laurie Tompkins, acting director of the Division of Genetics and Developmental Biology at the National Institute of General Medical Sciences.

“They also made an unexpected discovery, which is that worms are similar to mammals, which have much more complicated nervous systems, in that reversal—moving backwards—is controlled by two neural circuits,” Tompkins said.

The work was supported by grants from the National Institute of General Medical Studies and the Pew Scholars Program in Biomedical Sciences.