Researchers at Yale University have developed a new way of seeing inside solid objects, including animal bones and tissues, potentially opening a vast array of dense materials to a new type of detailed internal inspection.

The technique, a novel kind of magnetic resonance imaging (MRI), creates three-dimensional images of hard and soft solids based on signals emitted by their phosphorus content.

“We are extending the reach of MRI technology,” said Sean Barrett, a professor of physics and applied physics at Yale and the principal investigator of research published the week of March 19 in the journal PNAS. Merideth A. Frey, a doctoral student in physics at Yale, is the paper’s lead author. 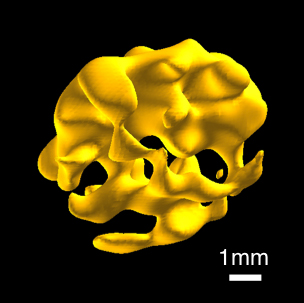 Yale University researchers have developed a new way of seeing inside solid objects. The technique, a novel kind of magnetic resonance imaging (MRI), creates three-dimensional images of hard and soft solids based on signals emitted by their phosphorus content. The image here shows the interior spongy bone of a rabbit femoral head, or the "ball" of the rabbit's hip bone. Image credit: Yale University

Traditional MRI produces an image by manipulating an object’s hydrogen atoms with powerful magnets and bursts of radio waves. The atoms absorb, then emit the radio wave energy, revealing their precise location. A computer translates the radio wave signals into images. Standard MRI is a powerful tool for examining water-rich materials, such as anatomical organs, because they contain a lot of hydrogen. But it is hard to use on comparatively water-poor solids, such as bone.

The Yale team’s method targets phosphorus atoms rather than hydrogen atoms, and applies a more complicated sequence of radio wave pulses. These extra pulses are the key innovation that allow for high-spatial-resolution imaging of elements like phosphorus, which is a relatively abundant element in many biological samples.

So far, the new MRI method, which the researchers call “quadratic echo MRI of solids,” can only be applied to non-living objects. It generates too much heat, among other things, according to Barrett. The new Yale method could also be applied to archaeological artifacts and oil- or gas-bearing rocks, for example.

In the experiments reported in PNAS, the Yale team generated high-resolution 3D MRIs of phosphorus in a variety of ex vivo animal bone and soft tissue samples, including cow bone and mouse liver, heart, and brains.

The researchers say this new type of MRI would complement traditional MRI, not supplant it. MRI of solids should also be possible with elements other than phosphorus, they say.

Barrett’s project began about 10 years ago with a different aim — the study of silicon powders, part of a broader effort to advance quantum computing.

“This shows how basic research in one area can have an unexpected impact on very different areas of science,” he said.

3D MR image of P-31 in a mouse brain from Yale University on Vimeo.

Additional authors of the paper are Michael Michaud, Joshua N. VanHouten, Karl L. Insogna, and Joseph A. Madri, all of the Yale School of Medicine.

“This study represents a critical advance because it describes a way to ‘see’ phosphorus in bone with sufficient resolution to compliment what we can determine about bone structure using x-rays,” said Insogna, a professor at Yale School of Medicine and director of the Yale Bone Center. “It opens up an entirely new approach to assessing bone quality.”

The research was supported by the National Science Foundation, the National Institutes of Health, and Yale University.