University of Chicago physicists have experimentally demonstrated, for the first time, that atoms chilled to temperatures near absolute zero may behave like seemingly unrelated natural systems of vastly different scales, offering potential insights into links between the atomic realm and deep questions of cosmology.

This ultracold state, called “quantum criticality,” hints at similarities between such diverse phenomena as the gravitational dynamics of black holes or the exotic conditions that prevailed at the birth of the universe, said Cheng Chin, associate professor in physics at UChicago. The results could even point to ways of simulating cosmological phenomena of the early universe by studying systems of atoms in states of quantum criticality.

“Quantum criticality is the entry point for us to make connections between our observations and other systems in nature,” said Chin, whose team is the first to observe quantum criticality in ultracold atoms in optical lattices — a regular array of cells formed by multiple laser beams that capture and localize individual atoms. Chin, UChicago graduate student Xibo Zhang and two co-authors published their observations online Feb. 16 in Science Express and in the March 2 issue of Science.

“This is a very important step in having a complete test of the theory of quantum criticality in a system that you can characterize and measure extremely well,” said Harvard University physics professor Subir Sachdev about the UChicago study. 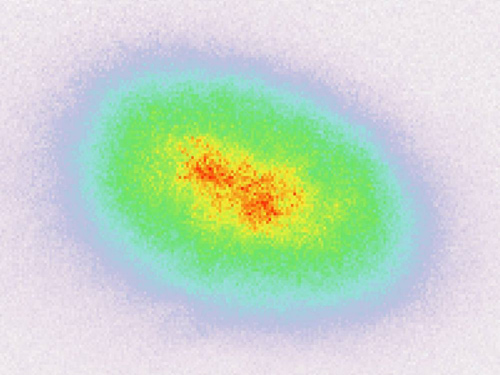 This false color image shows the average density of cesium atoms taken during multiple experimental cycles for studying quantum criticality in the ultracold laboratory of Assoc. Prof. Cheng Chin. The density is lowest in the white area on the outside, highest toward the center, where higher numbers of atoms are blocking the incoming infrared laser light. Xibo Zhang collected these data in connection with his recently completed doctoral research at UChicago. Image courtesy of Xibo Zhang and Cheng Chin

Physicists have extensively investigated quantum criticality in crystals, superconductors and magnetic materials, especially as it pertains to the motions of electrons. “Those efforts are impeded by the fact that we can’t go in and really look at what every electron is doing and all the various properties at will,” Sachdev said.

Sachdev’s theoretical work has revealed a deep mathematical connection between how subatomic particles behave near a quantum critical point and the gravitational dynamics of black holes. A few years hence, offshoots of the Chicago experiments could provide a testing ground for such ideas, he said.

There are two types of critical points, which separate one phase from another. The Chicago paper deals with the simpler of the two types, an important milestone to tackling the more complex version, Sachdev said. “I imagine that’s going to happen in the next year or two, and that’s what we’re all looking forward to now,” he said.

Other teams at UChicago and elsewhere have observed quantum criticality under completely different experimental conditions. In 2010, for example, a team led by Thomas Rosenbaum, the John T. Wilson Distinguished Service Professor in Physics at UChicago, observed quantum criticality in a sample of pure chromium when it was subjected to ultrahigh pressures.

Zhang, who will receive his doctorate this month, invested nearly two and a half years of work in the latest findings from Chin’s laboratory. Co-authoring the study with Zhang and Chin were Chen-Lung Hung, PhD’11, now a postdoctoral scientist at the California Institute of Technology, and UChicago postdoctoral scientist Shih-Kuang Tung. 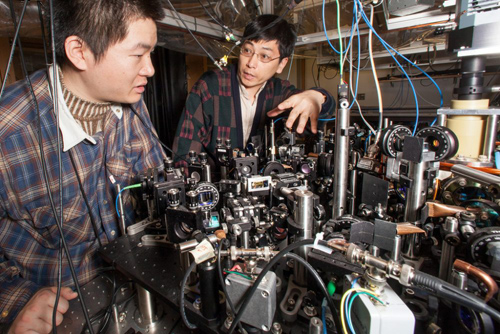 Graduate student Xibo Zhang (left) and Cheng Chin, associate professor in physics at UChicago, examine experimental hardware in Chin’s ultracold laboratory. Zhang began working with Chin because of their mutual interest in quantum simulation, the idea that one type of quantum system, such as ultracold atoms in a laboratory setting, could be used to simulate another system, like the one that dominated the universe shortly after the big bang. Photo by Jason Smith

In their tabletop experiments, the Chicago scientists use sets of crossed laser beams to trap and cool up to 20,000 cesium atoms in a horizontal plane contained within an eight-inch cylindrical vacuum chamber. The process transforms the atoms from a hot gas to a superfluid, an exotic form of matter that exists only at temperatures hundreds of degrees below zero.

“The whole experiment takes six to seven seconds and we can repeat the experiment again and again,” Zhang said.

The experimental apparatus includes a CCD camera sensitive enough to image the distribution of atoms in a state of quantum criticality. The CCD camera records the intensity of laser light as it enters that vacuum chamber containing thousands of specially configured ultracold atoms.

“What we record on the camera is essentially a shadow cast by the atoms,” Chin explained.

The UChicago scientists first looked for signs of quantum criticality in experiments performed at ultracold temperatures from 30 to 12 nano-Kelvin, but failed to see convincing evidence. Last year they were able to push the temperatures down to 5.8 nano-Kelvin, just billionths of a degree above absolute zero (minus 459 degrees Fahrenehit). “It turns out that you need to go below 10 nano-Kelvin in order to see this phenomenon in our system,” Chin said.

Chin’s team has been especially interested in the possibility of using ultracold atoms to simulate the evolution of the early universe. This ambition stems from the quantum simulation concept that Nobel laureate Richard Feynman proposed in 1981. Feynman maintained that if scientists understand one quantum system well enough, they might be able to use it to simulate the operations of another system that can be difficult to study directly.

For some, like Harvard’s Sachdev, quantum criticality in ultracold atoms is worthy of study as a physical system in its own right. “I want to understand it for its own beautiful quantum properties rather than viewing it as a simulation of something else,” he said.