On the night of June 23, it was all hands on deck in the emergency department at Yale New Haven Hospital. They were running out of resuscitation rooms and breathing tubes. Patients were put in overflow rooms, and doctors and nurses came from other departments to keep up with the flood of patients. The pace was unrelenting—beginning at 4 p.m. and lasting for six hours. The emergency staff had never seen anything like this before.

First responders had sent more than a dozen patients who had overdosed on what was believed to be heroin. Narcan, a drug that reverses the effects of an overdose, wasn’t working as usual and multiple doses were needed. Two patients were in cardiac arrest before they even got to the hospital and died shortly thereafter.

Rachel Solnick, M.D., a resident in emergency medicine, remembers feeling that something unusual was going on. She was caring for four patients at a time, constantly checking their vital signs, and placing tubes down their throats to help them breath. Many patients had to be maintained on a continuous Narcan drip, an unusual step to counteract an opioid overdose. “I’ve never been busier or more concerned about the people that were coming in,” Solnick said. 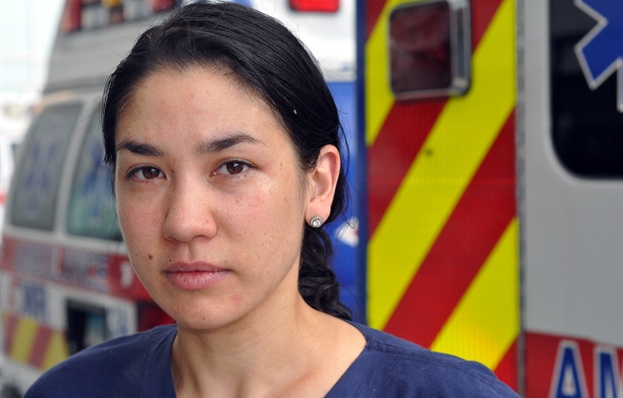 When she arrived for her shift in the emergency department on June 23, second-year resident Rachel Solnick realized that something unusual was going on. Photo credit: John Curtis

One of the first patients, a man in his 70s, was with friends at a ballpark, believing he was using cocaine, when he overdosed. The average opioid user is a young, white male. But many of these patients were significantly older, in their 60s and 70s, and reported being regular cocaine users. But what they thought was cocaine was actually fentanyl—a synthetic opioid 50 times more powerful than heroin. Days later police would charge three men with selling fentanyl advertised as cocaine, two of whom pled guilty early this month and are awaiting sentencing.

“One bag of white powder looks like the next bag of powder,” said Patrick G. O’Connor, M.D., M.P.H. ’88, the Dan and Amanda ’97 Adams Professor of General Medicine, chief of general internal medicine, and an addiction expert. “You don’t know what you’re getting.”

By 11 p.m. the siege was over and the emergency department took a collective breath. Seventeen people had overdosed and three of them had died. Doctors and EMTs had saved many lives, but they had almost run out of Narcan. The next day, the state’s public health department shipped 700 additional doses to the city.

Data from the state’s chief medical examiner’s office suggest that while the number of overall drug overdoses are leveling off in Connecticut, deaths from fentanyl are increasing. In 2012, fentanyl was involved in 14 fatal overdoses. In the first three months of 2016, fentanyl was involved in 83 out of 119 fatal overdoses. New Haven leads the state in fatal overdoses with 24 deaths in the first three months of 2016. New Haven has curbed the immediate problem, but a larger crisis looms over the city.

In collaboration with community, state, and federal agencies, and with assistance from the media, Gail D’Onofrio, M.D., M.S., chair and professor of emergency medicine, got the word out—there were drugs on the street that may not be as advertised and they may kill you—and recommended such harm reduction strategies as testing a small amount of any white powder before taking more. The people who landed in the emergency department that night were not regular opioid users; most were cocaine users. The strength of the fentanyl and their bodies’ unfamiliarity with opioids proved fatal in three cases.

Although on that particular night, many of the victims were users of cocaine, O’Connor sees an ongoing epidemic in opiate addiction that continues to be driven by prescription pills. More than 260 million prescriptions for opioids are written each year—one for every man, woman, and child in the country. Since 1991, the number of pain pill prescriptions has quadrupled. “A lot of this is sloppy prescribing on the part of the physicians who are not being thoughtful about when and how to use opioids,” said O’Connor. “Now, we’re paying for that.”

The idea that nurses and doctors should constantly be assessing pain began in the late 90s with the slogan “pain as the fifth vital sign,” along with body temperature, blood pressure, heart rate, and breathing rate. Karen Jubanyik, M.D. ’94, HS ’00, assistant professor of emergency medicine, recalls that physicians, encouraged by pain societies, pharmaceutical companies, and even the Joint Commission of Hospital Accreditation, doled out unnecessary prescriptions of opioids. “Doctors from all specialties thought that everybody with a skinned knee or a sprained ankle needed to be sent home with an opioid,” said Jubanyik.

D’Onofrio points out that those who suffer from chronic pain need to be evaluated by a pain specialist, and only in rare circumstances may need long-term opioids. If a patient uses a constant dosage for a long period of time, the body adjusts and eventually the medication’s threshold for effectiveness decreases. Consequently, the dosage needs to be increased, which can put the patient at a higher risk for an overdose.

At the School of Medicine, students receive some instruction about screening for addiction and safe prescribing habits. But O’Connor wants to take it a step further and make addiction medicine a pillar of the curriculum. “Yale has been one of the leading research institutions in addiction medicine in the United States for many years,” he said. “We also need to be a top medical school in education and patient care when it comes to addiction.” A committee of faculty, including D’Onofrio, O’Connor, Jeanette Tetrault, M.D., HS ’05, FW ’07, director of the Yale Addiction Medicine Fellowship Program, and others, have been evaluating the current curriculum looking for ways to strengthen the focus of addiction medicine, “so students come out being a physician that won’t repeat the mistakes of the past, and rather will provide the best possible evidence-based care for their patients.”

The past continues to haunt Americans. The Centers for Disease Control and Prevention (CDC) report that four out of five new heroin addicts in the United States begin with prescription pills. In 2014, the CDC reported, opioids killed more than 28,000 people. Access to treatment continues to be a problem. Despite progress in the early 2000s in bringing medication-assisted treatment to a primary care setting, there are tremendous obstacles to accessing treatment.

When he first began investigating medication as a form of treatment for addiction, O’Connor remembers, methadone clinics were the primary means of providing treatment. But there were far too few clinics and doctors couldn’t prescribe it in a primary care setting. “Back in the 1980s and 1990s, people were dying from their opioid addiction while they were waiting to get into methadone maintenance programs because there were no other highly effective treatment options,” said O’Connor.

Today, there are approximately 450,000 people on methadone nationally. Another 600,000 people are being treated with buprenorphine, a medication that helps people stave off the cravings for opioids and, unlike methadone, can be prescribed in a primary care setting. O’Connor and his colleagues published the first randomized trial of buprenorphine in primary care in 1998 and it was subsequently approved by the FDA in 2002—thus offering the opportunity to greatly expand treatment for opioid addiction.

D’Onofrio, David A. Fiellin, M.D., professor of medicine, and others have been working to bring medication-assisted treatment, primarily buprenorphine, to new settings like the emergency department. Narcan can reverse an overdose, but sometimes sends patients spiraling into withdrawal. Patients often have a hard time discussing the possibility of treatment when they’re experiencing withdrawal symptoms. If their discomfort can be managed, physicians may be better able to motivate them to accept treatment.

Not everyone who is treated for an opioid overdose is looking for help. The grip of addiction is complex and powerful, and D’Onofrio and O’Connor agree that addiction must be treated as another chronic disease. Because it’s chronic in nature, relapse is likely. While treatment can take years or a lifetime, like other chronic diseases addiction is highly treatable and patients need to be given access to the effective treatments that are available. But whatever the case, the perception that addiction is about a lack of willpower is wrong.

By offering their support every time someone returns to the emergency department, D’Onofrio hopes to provide people with a means to treatment and a path to recovery. She knows that relapse is likely and that opioid addiction is similar to any other chronic disease such as high blood pressure and diabetes, and may require lifelong treatment. “When we save a life from an overdose, that’s just the beginning,” said D’Onofrio. “If we directly link them to treatment we have a chance of keeping them alive.”