*At E3 Microsoft announces a big lineup of new Xbox 360 and Kinect game titles and introduces voice search with Bing on Xbox and Kinect that will change how people enjoy Xbox entertainment in the living room.*

The company also introduced voice search with Bing on Xbox and Kinect that will enable people to use their voice to tell their Xbox what entertainment content they are looking for, which will give them faster access to the ever-expanding universe of entertainment available right in their living room.

“Last year, Xbox 360 changed the game with Kinect. This year with the power of Xbox, the simplicity of Kinect and the intelligence of Bing, Xbox 360 will change living room entertainment forever,” says Don Mattrick, president of the Interactive Entertainment Business. “Combine all that we offer with great partners and a growing audience, and Xbox is poised to register another record year. This year Xbox 360 will go from being the number one selling console in North America to the number one selling console globally.”

At last year’s E3, Microsoft introduced the world to Kinect, which went on to become the fastest-selling electronic device in history. Though Microsoft doesn’t have a singular star like last year’s Kinect to showcase at E3, the so-called Super Bowl of the electronic entertainment industry, Molly O’Donnell, Xbox 360 director of marketing integration, says the company will show competitors, the media and fans that Xbox 360 “has a deep bench.”

“It’s not just winning the Super Bowl,” O’Donnell says. “A great team looks to the future and builds franchises, not just one-hit wonders. We’re going showcase the fun that Xbox 360 is delivering this holiday and paint a vision of what the future will look like.

Microsoft today announced several new titles on Xbox 360, including new installments of: “Call of Duty: Modern Warfare,” “Gears of War,” “Forza Motorsport,” and “Fable: The Journey,” a new extension of the Fable franchise that will take advantage of Kinect technology. Today’s E3 keynote also included world-premiere trailers for the next Halo games and for a new Kinect-powered historical Roman epic called “Ryse,” created by developer Crytek.

About the video: “Halo: Combat Evolved Anniversary” is a spectacularly remastered version of the original “Halo” campaign, created in celebration of the 10th anniversary of one of the most beloved franchises in gaming history. (WARNING: May contain content inappropriate for children.) Credit: Microsoft

Fans got glimpses of two new games from perhaps the most beloved Xbox 360 game franchise, Halo, O’Donnell says. In addition to celebrating the 10-year anniversary of the Xbox console with the release of a re-mastered version of “Halo Combat Evolved,” Microsoft announced that fans can expect to see Halo 4 in holiday 2012.

“We have the best games for everyone, including the biggest blockbusters, and the next generation of games and experiences that explore the full magic of Kinect,” O’Donnell says.

Microsoft also announced the next wave of titles coming for controller-free Kinect as well as a few traditional controller games that have enhancements available for consumers who have a Kinect sensor.

“After the success of Kinect, we’re working with the top pop culture brands, including Disney, Star Wars, and Sesame Street, to bring more and more content to Kinect,” O’Donnell says.

Many of the new Kinect games are for families and kids of all ages, including a game from Disney in which players will be able to high-five Mickey Mouse or fly with Peter Pan and Wendy, as well as the game “Sesame Street: Once Upon a Monster.” For the bigger kids and everyone else, “Ryse” will bring the gritty experience of ancient Rome to life, and – thanks to Kinect’s full-body recognition capabilities – a Star Wars game will allow players to physically train as a Jedi. 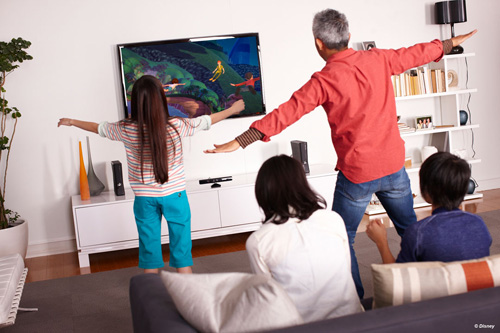 Kinect fans also will experience sequels to some of the most popular release titles, including follow ups to “Dance Central” and “Kinect Sports.” “Dance Central 2” will enable two dancers to break it down at the same time, allowing them to go head-to-head with a catalogue of more than 100 songs. “Kinect Sports: Season Two” includes six new activities – skiing, American football, darts, golf, baseball and tennis.

A few new games, such as “Forza Motorsport 4,” will still be played on the traditional Xbox controller, but will get a turbocharge from Kinect’s head-tracking features, O’Donnell says. That means players will be able to do things such as move their head to check their mirror to check out who is hot on their tail. Games such as “Ghost Recon Future Soldier” and “Mass Effect 3” will also be enhanced by Kinect. Also, Ubisoft announced that all future Tom Clancy games will take advantage of Kinect.

EA SPORTS also announced Kinect support for several of its blockbuster titles in 2012, including “Tiger Woods PGA TOUR,” “Madden NFL,” and “FIFA.” In the next 12 months, EA also has several additional titles that will feature Kinect, including “The Sims 3 Pets,” “Family Game Night 4,” and what is sure to be one of the biggest games of 2012, “Mass Effect 3.”

A New Voice for Your TV: Yours

Over the last two years, Microsoft has joined with some of the world’s largest TV operators to bring live television to Xbox LIVE in the United Kingdom with Sky TV, in France with Canal+, and in Australia with FOXTEL. At E3 Microsoft announced its commitment to expand access to live television programming on Xbox to more providers in the United States and around the world during the upcoming year. Consumers will enjoy news, sports and their favorite local channels, all just a voice command away on their Xbox.

Microsoft also announced that Netflix, Hulu+, and ESPN would be joined by UFC on Xbox LIVE. “To have all of that on Xbox 360 is a huge step,” O’Donnell says.

All the new content means there always will be something to do or watch, which could make finding content quickly a challenge, O’Donnell says. “This is why Microsoft is introducing voice search with Bing on Xbox.”

About the video: A look at the games that are coming soon to a Windows Phone near you. Credit: Microsoft

Bing on Xbox will search Netflix, Hulu+, ESPN, as well as music, video and Xbox LIVE marketplaces. The goal is to find the exact entertainment the customer is looking for. With Bing on Xbox and Kinect, consumers can use their voices to find the specific games, movies, TV shows, sports and music they are looking for. “It’s exciting to see how different Microsoft teams – Bing, Tellme and Xbox – worked together on this to deliver an experience, voice search, that consumers will love,” O’Donnell says. “If you say it, Xbox finds it.”

Put another way, Xbox’s voice capabilities are getting much more sophisticated.

“Last year with Kinect, you could say, ‘Xbox, play’ to start a movie or music, but we thought we’d take the power of voice to the next level,” O’Donnell says. “With voice search, you can say ‘Xbox, Bing, Harry Potter,’ and your Xbox will find all the Harry Potter content available to you on Xbox LIVE, whether it’s a game, a movie, or a soundtrack.”

Voice search with Bing on Xbox will become available this holiday season, as part of the Xbox LIVE update.

“Between Netflix, Hulu, ESPN, Zune, and more, we offer a lot of content and that trend is not ending,” O’Donnell says. “You could use your controller to find things, or use your hand, but what’s easier than you saying it and Xbox finding it? It’s making technology relevant and useful, and it’s awesome to be able to use technology that our wonderful decision engine Bing has already developed.”

Taking all of the offerings and franchises from Xbox’s first decade, add to that the success of controller-free Kinect and a burgeoning entertainment portfolio, and Xbox 360 is evolving into an all-in-one hub for the living room, O’Donnell says.

She adds that success didn’t come overnight for the Xbox in its first decade, and she would know – she’s been there for nine of those years. “But the transformation, from where I sit, has been amazing. It’s been hard, and it’s been methodical, and we have gone from, ‘number who?’ to ‘No. 2,’” she says.

Then, this year the Xbox 360 became the No. 1 selling gaming console in North America.

“Next year will be even bigger; our goal is to become the leading console in the world,” O’Donnell says. “It’s a seminal moment.”