Going Green: Berkeley Lab on a Path to Substantially Cut Its Emissions

*Energy use intensity is down; sustainability plan would reduce it even further.*

There’s an old saying that the cobbler’s children have no shoes. But at Lawrence Berkeley National Laboratory, whose scientists have pioneered many of the energy efficiency technologies being deployed around the world today, energy conservation is not neglected at home. In fact, a number of homegrown energy-savings technologies are in use at the Lab itself, allowing Berkeley Lab to substantially reduce its energy use intensity and make headway towards achieving significant cuts in its greenhouse gas emissions.

From cool roofs to automated building controls to advanced lighting systems, the Lab has implemented an assortment of measures which has resulted in a 44 percent decline in energy use intensity, or energy usage per square foot, since 1985. And greenhouse gas (GHG) emissions from Berkeley Lab facilities have shrunk by about 5 percent over the last two years.

Berkeley Lab has long made efforts to conserve energy—in the 1970s Art Rosenfeld, often referred to as the “godfather of energy efficiency,” went around the office turning off lights—but has refocused its attention to GHG emissions after President Barack Obama signed an executive order in 2009 requiring federal agencies to meet targets in emissions reduction as well as in energy, waste and water use reduction.

In response, a Berkeley Lab team consisting of sustainability coordinator and energy manager Blair Horst, Environmental Management System coordinator Patrick Thorson and Carbon Cycle 2.0 campaign manager Melissa Summers put together a bold 10-year Site Sustainability Plan that would reduce the Lab’s direct GHG emissions 57 percent by 2020 from the 2008 baseline, more than double the 28 percent reduction target for the Department of Energy. The Plan would also cut indirect GHG emissions—which are primarily from employee commuting and business travel—by 13 percent from the 2008 baseline. 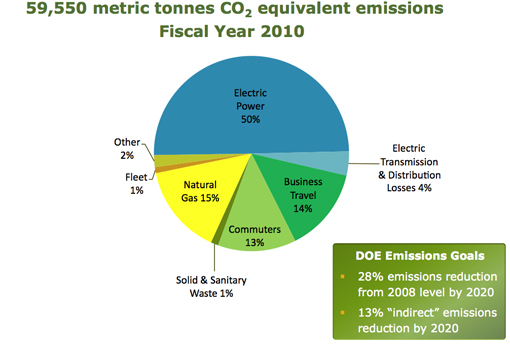 Berkeley Lab's direct and indirect greenhouse gas emissions in fiscal year 2010 totaled nearly 60,000 metric tons. Half of the emissions resulted from the Lab's use of electric power. (Source: Berkeley Lab)

The Site Sustainability Plan envisions a “living laboratory” in which technologies developed by Berkeley Lab scientists would be implemented and tested at the Lab itself. “We put together a plan that would really transform the Laboratory into a developmental test bed for rolling out technologies and getting them to market earlier,” Horst says. Adds Summers: “The idea to use our own facilities is where the operations piece meets the research piece. That’s what makes it exciting.”

Carbon Cycle 2.0 is one of Lab Director Paul Alivisatos’ major science initiatives. It is a multidisciplinary scientific approach to restoring balance to Earth’s carbon cycle.

Although the Sustainability Plan has not yet been fully funded, the Lab is already spending about $5 million annually on various energy efficiency-related renovations and equipment upgrades. With that modest amount, it has been on track to meet a DOE goal of reducing energy use intensity 30 percent by 2015 from 2003 base levels. “We are currently slightly above the goal trend—we had 15.5 percent savings as of the end of fiscal year 2010,” Horst says, adding that specialty high-energy facilities such as the Advanced Light Source and data centers are excluded from those calculations, per criteria guidance. 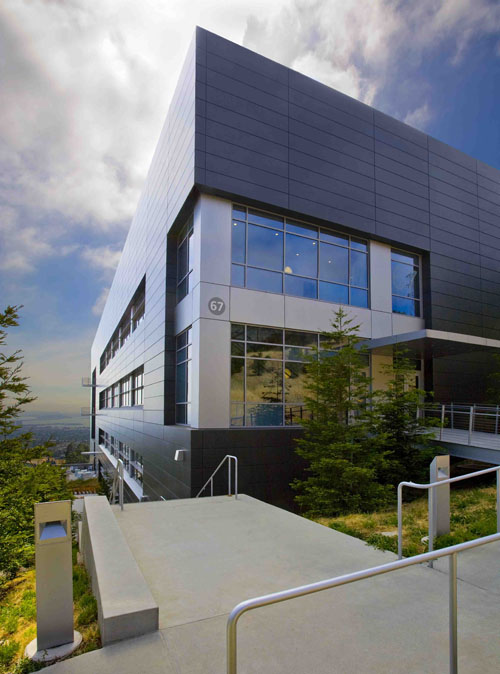 Much of the savings was achieved through measures such as replacing inefficient equipment—old boilers were replaced with robust condensing boilers—and installing electronic climate control systems and strategies.

The Lab has also installed nearly 500,000 square feet of cool roofs, about one-quarter of that just in the last year. Berkeley Lab scientists developed much of the science behind cool roofs and published a study last year confirming they act to offset carbon dioxide emissions and mitigate global warming. Last year Secretary of Energy Steven Chu directed all DOE facilities to install cool roofs whenever cost effective over the lifetime of the roof when constructing new roofs or replacing old ones.

A separate new federal requirement is that all new buildings or renovations costing more than $5 million must be designed to achieve LEED Gold certification from the U.S. Green Building Council. “We have a stretch goal to try to achieve LEED Platinum,” says Horst. “The Molecular Foundry [completed in 2007], our first LEED-certified building, is LEED Gold. It was Gold well before it was required.”

Another area in which Berkeley Lab has made strides is solid waste reduction and diversion from landfills. The total amount of solid waste is now 60 percent less than it was in 1993, and last year about 85 percent of construction waste was recycled, far exceeding the 50 percent target set in the executive order. “We take pride in our sustainable operations and maintenance practices here,” Horst says. “We have integrated pest management, we have green cleaning products, and we’re rolling out a composting program which should be mature by the end of this fiscal year. So we have less solid waste that goes to the landfill.”

With these achievements, a couple challenges still lie ahead.

Water savings have been difficult to attain because 85 percent of the water consumed at the Lab is for process cooling at places like data centers and the Advanced Light Source. The executive order set a goal of 26 percent water savings by 2020. “Every time you do something in science, you have to turn something on. That generates heat; then it has to be cooled so you can do the science,” says Horst. “Water is the most cost-effective means of performing processing cooling. We will make good business decisions for the Laboratory, thus we will employ cooling towers to cool our processes. This practice will make it difficult to achieve the water savings goal.”

Another area that faces challenges in going green is procurement. Horst and his colleagues are working with the Lab’s procurement team on getting the Lab to buy “green” products such as recycled paper, pens with soy-based ink, refurbished toner cartridges and electronics that meet green standards known as EPEAT. “We’re doing well, but we have room to improve,” says Thorson. “Procurement handles over 100,000 transactions a year. When an employee or buyer goes to buy something online, there’s no obvious field that distinguishes something as a ‘green’ product. So tracking this is a huge challenge.”

Summers notes that Berkeley Lab research has helped U.S. consumers save more than $250 billion in energy spending. “With our expertise in energy efficiency and building technologies research, it just makes sense for Berkeley Lab to lead by example and demonstrate next-generation energy-saving technologies in our own facilities,” says Summers. “We can create confidence for building owners and architects to adopt these new technologies sooner, which will have a huge multiplier effect beyond the carbon emissions reductions at Berkeley Lab.”