Write Ideas, a new app from the Microsoft Garage, helps students bring their ideas to the page

For Claudia Vormbaum, 23, overcoming her academic struggles due to ADHD and dyslexia is a continuous work in progress. But as an intern for the Microsoft Garage in Vancouver, Canada, she spent four months with other interns on a team developing an inclusively-designed app that helps students with the pre-writing process.

Write Ideas is a new app for iOS that focuses on alleviating the difficulty of getting started on book reports, essays and more. It does so through guided prompts and exercises, including speech-to-text and drawing features.

“I have a lot of empathy for kids that struggle in school and feel different than the other kids because I have a learning disability myself and I’ve been there,” says Vormbaum, a junior who majors in Interaction Design at Sheridan College, just outside Toronto, Canada. “I’m very interested in education and inclusive design and as such, Write Ideas felt like the perfect project for me where I could make an impact in the lives of children struggling in school like I did.”

She was responsible for user research, designing the experience and user interface of the application, as well as branding and marketing materials. 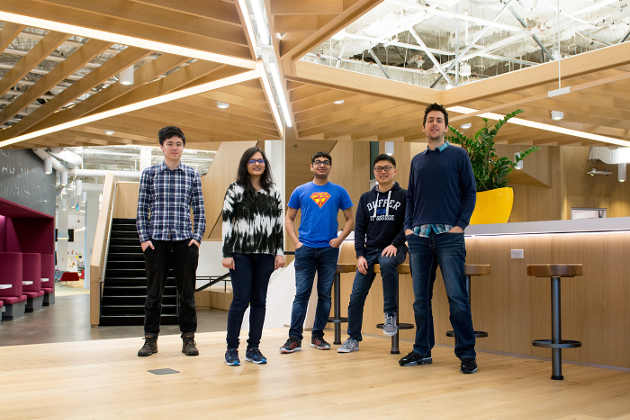 Mike Tholfsen, principal program manager for the education team at Microsoft, collaborated with the original hackathon team that came up with the concept that would eventually become Write Ideas. He helped pitch the idea to the interns, who choose projects to work on for the four months they’re at the Microsoft Garage.

The Garage, which celebrated a major milestone in November, is the outlet for Microsoft teams around the world to get experimental apps and projects out to the public, such as Arrow Launcher v3, as well as Email Insights, Video Breakdown, Clip Layer, Kaizala, Sprightly, News Pro 3.0 and Color Binoculars.

The interns’ sponsor on the project, Ailsa Leen, a Vancouver-based program manager on the OneNote team, says, “This project wouldn’t have been the same without The Garage team. The interns put their all into it, and brought so much creativity and passion to the project. I hope we’re able to sponsor many more projects with the Garage.”

Leen says Garage interns look for “a good amount of independence and ability to take on a project as their own. We had a compelling problem to be solved and a direction it could be solved. But there wasn’t a lot of specifics, so there was a lot of opportunity for them to explore and make the project their own.”

The app’s inclusive design approach enables increased access, reduced friction and more emotional context to the greatest number of people. Inspired by the needs of people with disabilities, designs like that which fueled Write Ideas create more usable, innovative experiences for everyone.

“The interns took the initial idea and started meeting with teachers and students, went into schools, brought people in,” Tholfsen says. “They went way beyond the original prototype and what we expected. They designed a beautiful app, they added more capabilities, learning tool pieces, line spacing and parts of speech. They added read aloud, a whole host of things. Ultimately, it became Write Ideas.”

Along with that autonomous appeal, the interns also relished a chance to work on something that could benefit many people.

“There was definitely a ‘change-the-world’ aspect to this,” Tholfsen says. “They were excited about the possibility of creating something that could help students write better. The app’s personalization, being able to pre-write and capture content could help all kids.”

The team designed the app to provide prompting questions. For example, if you’re going to write an essay, Write Ideas will ask who the main character is, or for a headline, what happened, where, etc. Users can answer by typing, speaking or drawing.

“For many people with dyslexia, getting out the words onto paper, whether it’s writing or typing, can be difficult,” says Tholfsen, who’s worked closely with dyslexia experts.

He says that’s what makes the app so helpful.

“What’s nice is that it captures that whole process, and creates an outline, essentially,” Tholfsen says. “So now instead of having a blank page, which impacts children with learning disabilities more severely, it actually prompts a student and gives him or her a full outline of their ideas. It’s much more important for them to get their ideas out than spending all their mental energy typing or spelling the words right.”

Leen says the blank page problem is “something we can all empathize with.”

“We were trying to level the playing field for children with learning disabilities, who have just as many vibrant and exciting ideas, but they can’t get them down on paper,” Leen says. “We talked a lot about helping students talk it out.”

When the interns returned to school, another team took the project to the finish line: The Vancouver Education team, which is chartered with education engineering efforts, says Adam Kelly, an engineering manager on the Vancouver team.

“We saw a lot of potential by the great work the interns had done and the feedback the app had received in its private beta and we decided to move forward to a public, scaled up release,” he says. “The team is planning to listen and learn from new users as we start to work with the app, as well as partner with specific schools who are piloting the app in their English classes. We’ll incorporate feedback and build on what they learn.”

For educators who saw the app in preview, it struck the right chords.

“When I downloaded Write Ideas, I could see many uses for students, teachers and administrators as a quick tool to plan and outline a proper document,” says Sandi Adams, a technology project specialist for the Cherokee County School District in Georgia. Her role is to introduce and pilot new technology projects and to help integrate them into the classroom. She’s worked in technology and education for more than 20 years. “Being able to develop an idea for essays, letters, articles, short stories or book reviews on the fly is genius. I love the opportunities for students to outline and organize their thoughts for writing projects. But I really love the idea for myself as I am developing a presentation and making notes. It really helps with brainstorming and working through your flow of ideas.”

For Vormbaum, the app’s template structure resonates with what she feels would’ve helped her in earlier struggles.

“These would have helped to alleviate that overwhelming feeling for me and helped me get a jump start on my assignments. I always found that speaking out loud my ideas was much easier than jumping right into writing things down,” says Vormbaum, who was diagnosed when she was 20, so she struggled through school for many years not knowing she had a learning disability. She’s now in a program that is project-based and much better suited to her and her interests.

Working on a project that hit home for her also helped.

“I think the most satisfying part of working on Write Ideas was watching all our work come to life during our four-month internship period, as the application was built from conception to release,” she says. “To have had so much ownership over a project during an internship was really exciting and a big responsibility and opportunity we were lucky to have. We received a lot of validation from real students and teachers throughout the process of building the application, which was really encouraging as well to know that we were on the right track.”

Download Write Ideas and learn more about it at The Garage.