World population to keep growing this century, hit 11 billion by 2100

Using modern statistical tools, a new study led by the University of Washington and the United Nations finds that world population is likely to keep growing throughout the 21st century. The number of people on Earth is likely to reach 11 billion by 2100, the study concludes, about 2 billion higher than widely cited previous estimates.

The paper published online Sept. 18 in the journal Science includes the most up-to-date numbers for future world population, and describes a new method for creating such estimates. 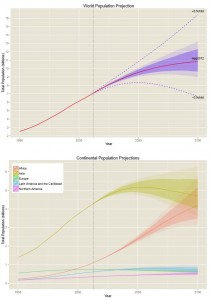 The top panel shows total world population projected to 2100. Dotted lines are the range or error using the older scenario method, while shaded regions are the uncertainties using statistical methods. The darker shading is the 80 percent confidence bars, and the lighter shading shows the 95 percent confidence bars. At the bottom are the population projections for each continent. Image credit: A. Raftery / UW (Click image to enlarge)

“The consensus over the past 20 years or so was that world population, which is currently around 7 billion, would go up to 9 billion and level off or probably decline,” said corresponding author Adrian Raftery, a UW professor of statistics and of sociology. “We found there’s a 70 percent probability the world population will not stabilize this century. Population, which had sort of fallen off the world’s agenda, remains a very important issue.”

The paper explains the most recent United Nations population data released in July. This is the first U.N. population report to use modern statistics, known as Bayesian statistics, that combines all available information to generate better predictions.

Most of the anticipated growth is in Africa, where population is projected to quadruple from around 1 billion today to 4 billion by the end of the century. The main reason is that birth rates in sub-Saharan Africa have not been going down as fast as had been expected. There is an 80 percent chance that the population in Africa at the end of the century will be between 3.5 billion and 5.1 billion people.

Other regions of the world are projected to see less change. Asia, now 4.4 billion, is projected to peak at around 5 billion people in 2050 and then begin to decline. Populations in North America, Europe, and Latin America and the Caribbean are projected to stay below 1 billion each.

The figures largely support U.N. projections from 2013 but add a new dimension, said first author Patrick Gerland, a demographer at the U.N.

“Earlier projections were strictly based on scenarios, so there was no uncertainty,” Gerland said. “This work provides a more statistically driven assessment that allows us to quantify the predictions, and offer a confidence interval that could be useful in planning.”

World population projections are based mostly on two things: future life expectancy and fertility rates. Earlier techniques relied largely on expert opinion for how those trends were expected to change.

The newer forecast instead uses statistical methods to combine government data and expert forecasts for such things as mortality rates, fertility rates and international migration.

Also, earlier reports represented uncertainty by using scenarios in which women would have 0.5 children more or less than the experts’ forecast. That method, Raftery said, generates too great a range.

The new method uses statistical models to narrow the range, finding an 80 percent probability that the population in 2100 will be between 9.6 billion and 12.3 billion.

“This paper brings together the research from the past seven years, and also brings in recent data,” Raftery said. “We can answer questions about future population growth using standard principles of statistical inference, which has never really been done before.”

Rising population could exacerbate world problems such as climate change, infectious disease and poverty, he said. Studies show that the two things that decrease fertility rates are more access to contraceptives and education of girls and women, Raftery said. Africa, he said, could benefit greatly by acting now to lower its fertility rate.