The union of a wealthy older woman who caused offence in polite society and a political nobody who would become one of the foremost politicians of the Victorian age is the subject of a new book.

From the outset they made an unlikely couple. Mary Anne was born in Brampford Speke near Exeter. She was the daughter of a sailor, 12 years Disraeli’s senior, and married to someone else when they met. She was also highly eccentric, rich and embarrassingly overdressed for grand society dinners. Disraeli was of Jewish decent, a mid-ranking novelist who was mired in debt, and an aspiring Conservative politician. 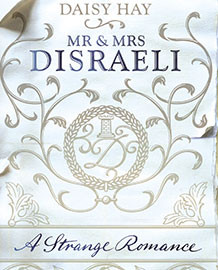 Disraeli spent much of his early life on verge of financial ruin, and his marriage to Mary Anne, a well-off widow, caused a scandal. His debts only finally disappeared when he acquired a rich patron in Torquay, Sarah Brydges Willyams, who the Disraelis visited each Christmas. On her death she left the couple her house in Mount Braddon along with the rest of her estate, finally solving their money worries.

According to the book, they made perfect targets for the vicious Victorian press and society gossips, yet their odd match appeared to make them impervious to the negativity. The Disraelis were also good at telling tall tales, and together they spun their unusual tale into a romance worthy of the novels they enjoyed reading.

At the Bodleian Library, Oxford, Dr Hay examined the great cache of their letters and the anecdotes of others; and was able to show how the Disraelis rose to the top of the social and political pile.

Dr Hay said:“Politicians talking about their private lives are a commonplace in our age. However, long before it became obligatory for aspiring statesmen to be photographed or filmed doing mundane activities, Benjamin Disraeli spun a public fantasy about his private life to win votes.”

She added:“The Disraelis were from unusual backgrounds, and created fantasises about their origins to make themselves more interesting.  Both were born story tellers and as outsiders they knew the importance of image and spin in a world where new money was frowned upon. In an age where first ladies are under ever-increasing pressure to perform and conform, my book offers a portrait of a couple who refused to do either, in a society which demanded you do both.”

The book also explores women of a similar station in life and situation whose endings were far unhappier than Mary Anne’s, whose fairy tale ending of life at 10 Downing Street.