World’s Top Tech Students Go for It All Down Under

Young technologists are looking to take the world by storm this weekend at the Imagine Cup 2012 Worldwide Finals in Sydney, Australia.

SYDNEY – Wrapped in the flags of their countries, the competitors climb onto the podium, beaming with joy as the cameras flash. They are young, passionate, business-savvy ambassadors of their field.

These aren’t soccer players or high jumpers, but they are no less competitors than the athletes seeking gold medals at the 2012 Summer Games in London. They are the planet’s premiere young technologists. And, to slightly alter an infamous movie line, they’ve come to change the world and chew bubblegum – and they’re all out of bubblegum.

More than 350 young technologists from 75 countries and regions have gathered in Sydney this week to participate in the Imagine Cup 2012 Worldwide Finals, the 10th running of the technology competition sponsored by Microsoft. The whirlwind event begins Friday, the judges will announce finalists on Sunday, and overall winners will be announced Tuesday.

“The way I look at it, it’s like the 2012 Summer Games, the World Cup of soccer, and the World Series of baseball all rolled into one,” says Walid Abu-Hadba, corporate vice president of Microsoft’s Developer and Platform Evangelism group.

Just like Olympic athletes, Imagine Cup finalists train and prepare relentlessly leading up to the competition. They progress to the finals and all eyes are upon them. Like any athlete or team with an eye on the victor’s podium, during those final moments it’s only that preparation – along with their dedication, knowledge, creativity and passion for their “sport” – that can get them to where they’re going.

The students’ software, cloud computing and game design projects are designed not only to be leading edge, but to solve some of the world’s most pressing problems – hunger, the environment, disease, infant mortality, energy and more.

“The students’ ideas are fresh, and they’re willing to take technological risks that some seasoned professionals aren’t,” he says. “That’s the beautiful thing about Imagine Cup. It’s not just a competition; it is really, really allowing students to think beyond what’s possible.” 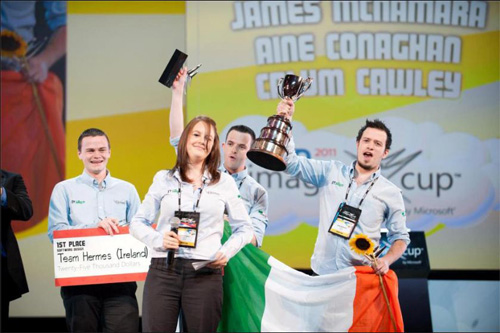 The Thrill of Competition. Flag-draped competitors, flashing cameras, big smiles, hoisted trophies – it’s a scene from many a sporting event, but at Imagine Cup the “sport” is using technology to solve the world’s toughest problems. Image credit: Microsoft

Abu-Hadba said it’s inspiring to watch the way students from a multitude of backgrounds find common ground as they combine their love of technology with their determination to make a difference.

“My generation would think code first, and then go find a problem to solve with that code,” he says. “Computer science was always the upper value. These kids don’t think that way. They think, ‘Hey, here’s a real-world problem, and computers are the best way to solve that.’ It’s a completely different way of thinking about and approaching the world using technology.”

From crop irrigation to disease and illiteracy to hunger, each year Imagine Cup projects are vastly varied yet they all take aim at solving one of the world’s toughest problems. This year is no different. 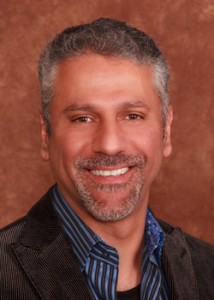 In the Software Design competition, one finalist – Team BoddyMusic from Argentina – created a classroom application for Kinect for Xbox 360 to allow people with disabilities to learn about music and even play various instruments using body movements. Team CatchCake from Serbia created a program to assist blind and visually impaired people in their travels by using radar to alert them of objects in their way. Team Let IT Bee from Korea created an app for mobile and Web platforms to help bee farmers and companies. Team Symbiosis of Greece created software to provide augmented reality therapy for Alzheimer’s patients.

In the Game Design Xbox/Windows competition, Team Radiant from Iceland created “Robert’s Quest,” in which an environmentally conscious squirrel helps society get back in touch with nature. Finalists in the Game Design Phone competition, Team Drexel Dragons from the United States, created a game called “MathDash” to reinforce the mathematics skills of elementary school students.

“The standard goes up every year,” says Robert Miles, a computer science professor at The University of Hull in England. Miles has been involved in Imagine Cup since its inception, and as the event’s Competition Captain for Software Design, he has spent weeks reviewing Imagine Cup projects – and judges’ preliminary feedback for teams.

“It’s interesting – you see judges who are professionals in their field giving comments to these students as if they were professionals and saying what they’d be saying to professional colleagues if they were working on a project with them,” Miles says. “By the time you get to the Imagine Cup World Finals, the standards are just very, very high. I see a lot of these projects and think, ‘By god, I wish I’d thought of that.’”

No More ‘Pizza in a Darkened Room’

More than 1.65 million students have participated in the first decade of Microsoft’s annual technology competition. 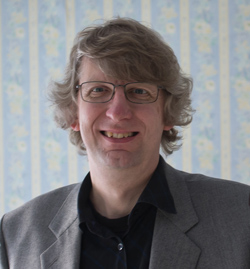 ‘I Wish I’d Thought of That’. Robert Miles, a longtime Imagine Cup volunteer and computer science professor at The University of Hull in England, said the competition standard goes up each year. Image credit: Microsoft

Ten years ago at the first-ever Imagine Cup, Miles mentored a team of students, helping them get all the way to a third place worldwide finish in Barcelona. The next year, the team he mentored won another trip to the Worldwide Finals, narrowly beating his son’s team in the regional finals.

“I aced him out of a trip to India. He’s never forgiven me,” Miles says with a laugh.

Whether it was his son (who went on to become a software designer), his computer science students, or students he later worked with as an Imagine Cup judge or mentor, Miles says he’s seen many lives change for the better in the course of the competition.

The competition and the competitors have evolved in tandem in the last decade. The competition which, in its first year, was more of a technological show-and-tell, has become a microcosm of what students will need to know in the real world. Technology skills are not enough – they need to learn to work with peers, present themselves and their ideas with strength, and embrace the entrepreneurial spirit. Though many of these areas take students outside their comfort zone, Miles likes to tell them, “What doesn’t kill you makes for a good blog entry.”

“At one time, computer science was about sitting in darkened rooms and eating pizza and writing code,” Miles says. “Now you’ve got to get out of that little, darkened room, meet people, and share your ideas.”

Just as the competitors have evolved, so too have their tools. Every year finds Imagine Cup students embracing the newest Microsoft technologies for their projects, which this year includes (but is not limited to) Windows 8, Windows Azure, Windows Phone, Kinect for Xbox 360, Kinect for Windows SDK, Bing, Windows 7 Touch, Visual Studio, Silverlight and the XNA Game Studio Toolkit.

Imagine Cup is mostly about giving students the resources they need to succeed, and then getting out of their way and letting them create, Abu-Hadba says. So then what is the result of students using the latest technology to solve real-world problems, creating multi-disciplinary teams of their peers and presenting themselves professionally? Instilling the students with a healthy, valuable dose of entrepreneurial spirit, he explains.

Brazilian brothers and Imagine Cup finalists Roberto and Eduardo Sonnino are prime examples of that entrepreneurial spirit. Their house has an entire wall devoted to Imagine Cup trophies and memorabilia – they’ve had 11 projects in eight Imagine Cup Worldwide Finals between them.

“We started when Roberto was in his last year of high school and I was in my first year. We’ve pretty much grown up with Imagine Cup in our lives,” Eduardo says. “We’ve learned a lot. We’ve learned to manage projects, we’ve learned to develop in short time constraints and deal with really short deadlines, we’ve worked with the newest technology that hasn’t been released yet, and we’ve managed bugs.”

Roberto loves coding while his brother gravitates more toward design and user interface – the perfect team. “How convenient, eh?” Roberto says, laughing. Their father, also a software designer, is their mentor and was the one to introduce them to the Imagine Cup. Their first year they created software called Wazoo, a question-and-answer site designed to help dissolve the boundaries between high school students. The brothers finished second in the competition’s high school Web development category (which no longer exists).

“The combination of our skills worked really well, and we’ve been working together ever since,” Eduardo says.

This year they are competing in two of the Imagine Cup Challenge categories with a project called Eureka, which enables teachers to turn lesson plans into interactive content for students’ phones, PCs or tablets.

The best part, they say, was pushing their skills to the limit and also meeting likeminded students from around the world.

“We’ve created friends and contacts for life. It’s been really cool,” Roberto says. “I can say today that I have a house in 50 different countries.” 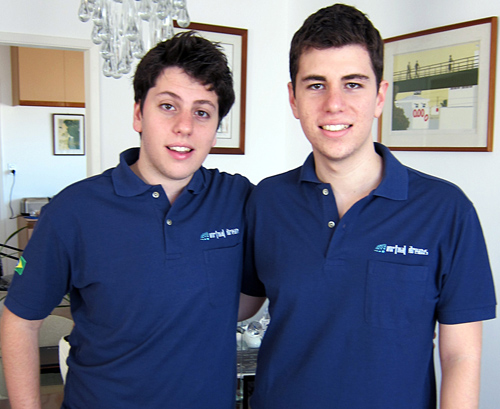 The air in Sydney is electric. Most of the competitors have landed, and after Friday’s opening ceremonies they’ll spend the subsequent few days living, eating, breathing and sleeping Imagine Cup. Well, perhaps not sleeping, says Ali Driesman, worldwide competition manager for the Imagine Cup. So what’s it like?

“You find this energy and passion there that you don’t find at other events,” she says. “They’re surrounded by likeminded people, not just alike in that they’re students, but in that they want to change the world. It feels like you don’t sleep for five days, and it’s probably because you don’t. But you’re not tired. You want to be up for every second. This is truly a once-in-a-lifetime experience.”

In addition to the competition, students get to choose one of three outings in Sydney – a bus tour of the city, a visit to the Taronga Zoo, or for the more daring competitors, strap on a climbing harness and ascend the iconic Sydney Harbour Bridge.

Microsoft has been a longtime supporter of finding ways to get students more interested in the areas of science, technology, engineering and math (STEM). It’s a critical time to engage students in STEM areas. Imagine Cup makes those areas of study real for students who might be interested in STEM fields as well as attracting students already in those fields and helping them to bring their ideas to life.“Students are fearless when it comes to innovating,” Driesman says. “They are really at the forefront, and are the pioneers of taking risks and exploring new technology.”