Woman Chases Tiger Attacking Her Husband Away With Wooden Ladle

A Malaysian woman has rescued her husband from tiger attack by hitting the animal on its head with a wooden ladle and chasing it away.

Tambun Gediu, 60, from an Orang Asli settlement, was hunting for squirrels near his village in the Gerik Belum Forest Reserve on Saturday when the 90kg tiger pounced on him. 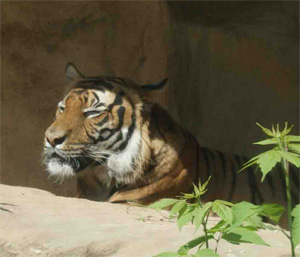 A Malaysian Tiger in Zoo Halle in Germany

He was about to use his blowpipe when he heard some rustling in the bushes and saw the tiger charge at him.

“My first instinct was to climb a tree but the tiger pounced and started clawing me. I had to use all my force to push the tiger’s mouth away from my face while shouting for help,” he said, DailyIndia.com reports.

The 55-year-old woman used the spoon to beat the animal on the head – and remarkably it ran away.

‘It would have clawed me to death if my wife had not arrived,’ Tambun said as he recovered in hospital after an operation on lacerations to his face and legs.

Residents in the couple’s village in Kg Sungai Tiang, 160 miles north of Kuala Lumpur, are hailing Han Besau as a hero who saved her husband from certain death, according to Daily Mail.