Adjusting wind turbine operations during the migration season at the University of Delaware’s Hugh R. Sharp Campus in Lewes has resulted in a significant decrease in deaths among bats, according to researchers.

The ability to modify operations has been aided by the “bat shield,” a new technology developed by UD’s partner, Gamesa Technology Corp., and tested at the wind turbine.

Jeremy Firestone, professor of marine science and policy in UD’s College of Earth, Ocean, and Environment, said scientists from both UD and Delaware State University (DSU) have been studying bat and bird activity at the wind turbine since shortly after its installation in 2010.

The wind turbine was installed by First State Marine Wind LLC, a joint venture between the UD-owned Blue Hen Wind and Gamesa.

“With minimal loss in power production — and hence revenue — and with the aid of the bat shield, First State Marine Wind was able to realize a significant reduction in bat fatalities,” Firestone said. 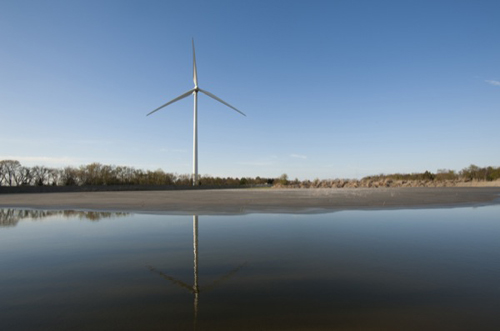 Adjusting wind turbine operations during the migration season at the University of Delaware’s Hugh R. Sharp Campus in Lewes has resulted in a significant decrease in deaths among bats, according to researchers. Photo by Kathy F. Atkinson

A great advantage of the bat shield is that “we can program in changes to the cut-in speed that are tied to atmospheric conditions and time of year and time of day so that turbines can be easily adjusted to protect bats,” he said.

Because it sits just one kilometer from the Delaware Bay, which is one of the world’s most important international migratory avian stopover locations, the project partners began a variety of research projects including those focused on interactions of migratory birds and bats with the wind turbine.

An initial two-year study involving ornithologists and bat biologists from UD and DSU was conducted in 2011-13, Firestone said.

An advisory committee around the study included representatives of the Delaware Department of Natural Resources and Environmental Control, the U.S. Fish and Wildlife Service and a birding nongovernmental organization.

The researchers found that bird strikes were well below levels that would adversely impact their populations, Firestone said, and the Fish and Wildlife Service, which has jurisdiction over migratory birds, concluded that no further action was required concerning birds.

The study also found that bat impacts were higher, with eight times as many bats as birds killed in interacting with the turbine.

That led to a recommendation by the Fish and Wildlife Service to modify wind turbine operations during the bat migratory season, which locally lasts roughly from July through September.

Rather than simply change operations during migratory season, Firestone said UD and Gamesa decided to also embark on a curtailment research study of bats only, which is now in its second year and “may be one of the first of its kind on a single wind turbine.”

The additional study, funded by First State Marine Wind and led by principal investigator Kevina Vulinec, DSU associate professor of natural resources who leads a bat studies laboratory, was designed to measure the effectiveness of adjusting the operation of the wind turbine in low wind conditions during the hours immediately following dusk.

Firestone said the work was facilitated by Gamesa’s innovative bat shield, which allows programmed changes to turbine operations based on various parameters around climate, time of day and wind speed.

When data for the weeks when the bat shield was deployed were compared to weeks when it was not, a 90 percent reduction in bat fatalities was observed, Firestone said

Typically, such reductions would be expected to be in the range of 30-50 percent so the 90 percent would be at the top range of reductions that have been witnessed at any wind project, according to Vulinec, who added that this represents just one year of data and that the addition of information from a second year of study will provide a stronger estimate of the bat shield impact.

However, she said the initial findings are “certainly very encouraging.”