Wind turbines could power half the world’s future energy demands with minimal environmental impact, according to new research published by University of Delaware and Stanford University scientists in the Proceedings of the National Academy of Sciences.

The researchers arrived at the determination by calculating the maximum theoretical potential of wind power worldwide, taking into account the effects that numerous wind turbines would have on surface temperatures, water vapor, atmospheric circulations and other climatic considerations.

“Wind power is very safe from the climate point of view,” said Cristina Archer, associate professor of geography and physical ocean science and engineering at UD.

Archer and Stanford’s Mark Jacobson identified the maximum wind power potential by finding the saturation point where adding more turbines would fail to increase energy output. As the number of wind turbines increases over large regions, the amount of power generated at first increases proportionately – but then reaches a point of diminishing returns and eventually flattens out.

This “saturation wind power potential” is reached when too many turbines leave too little wind left behind to extract, interfering with the climate and leveling off the total energy output.

“They reduce the amount of energy available for others,” Archer said. “And that’s the point that was very important for us to find.”

The scientists concluded that the saturation wind power potential is greater than 250 terawatts (1 terawatt = 1012 W) globally and 80 TW over land and coastal ocean areas at 100 meters in the air, the height of most modern wind turbines. This potential far exceeds the global energy demands, Archer said.

“The result of this study suggests that there is no fundamental barrier to obtaining many times the world power demand for all purposes in a clean-energy economy from wind,” Jacobson said. 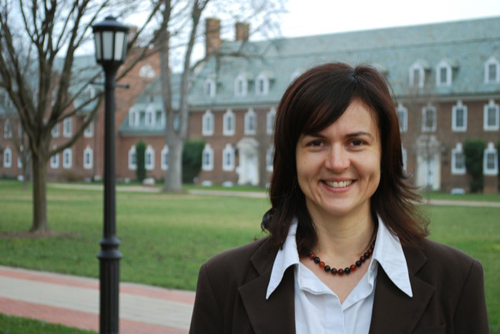 Archer and Jacobson found that installing 4 million turbines could yield up to 7.5 TW, more than enough to power half the world’s power demand in 2030. They also showed that spreading wind farms out worldwide in windy locations would increase efficiency, as well as minimize costs and reduce overall impacts on the environment when compared to packing the same 4 million turbines in a few spots.

The work counteracts previous claims that the wind resource is small with damaging climate impacts. Last year, German researchers from the Max Planck Institute for Biogeochemistry reported there to be a very low potential for wind with harmful effects similar in magnitude to doubling atmospheric carbon dioxide.

Puzzled by their conclusions, Archer and Jacobson set out to determine the resource at a global scale using a physical model to thoroughly address the many factors at play. They used a 3D atmosphere-ocean-land coupled model (GATOR-GCMOM) that extracts energy where the turbines would actually be located 100 m off the ground, instead of at the surface like the German study. Their high-resolution model addresses numerous factors, such as chemistry and water vapor content.

The findings confirm that wind power is a viable component of a clean-energy economy. While wind power does alter the atmosphere when extracted at massive scales – decreasing wind speed at hub height and to a lesser extent at the surface, reducing the amount of water vapor and cooling the planet – the impacts are negligible at more practical scales of extraction, such as 7.5 TW.

At any scale, wind extraction impacts are less than damage from heat-generating combustion and nuclear reaction from fossil and fissile fuels. Wind turbines generate no significant heat, pollutants, soot or ozone.

“Everything comes at a price, but the price of wind power comes at a low cost in terms of climate impacts,” Archer said.