Woods Hole Oceanographic Institution (WHOI) researchers have filled an important gap in the study of tunicate evolution by genetically sequencing 40 new specimens of thaliaceans,  gelatinous, free-swimming types of tunicates. Their study was featured on the cover of the June issue of the Journal of Plankton Research.

Tunicates are a phylum of animals closely related to vertebrates, with a firm, rubbery outer covering called a tunic, from which the name derives.

“Thaliaceans have been poorly represented in previous studies of tunicate evolution,” said Annette Govindarajan of WHOI and Northeastern University, who performed the research along with WHOI Director of Research Laurence P. Madin and Ann Bucklin of the University of Connecticut at Avery Point. “Our study included 40 new sequences, which allowed us to make new insights on evolutionary relationships both within the Thaliacea, and between thaliaceans and other tunicates,” Govindarajan said. 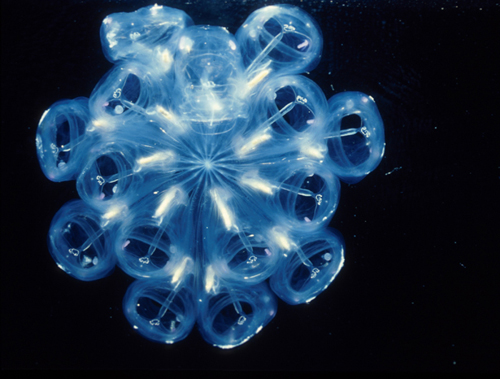 Image of the salp Cyclosalpa pinnata that appeared on the cover of the June Journal of Plankton Research. Salps are one of three lineages of thaliaceans. (Image credit by: Larry Madin, Woods Hole Oceaanographic Institution)

Thaliaceans play an important role in many ocean ecosystems. They are known for their complex life cycles and their role in the transfer of organic matter from the surface to the deep sea.

The researchers made their discovery by sequencing the gene 18S rDNA. “Relatively little is known about evolutionary relationships within the Thaliacea and between thaliaceans and other tunicates — for example, how they are related to various groups of ascidians, or sea squirts,” Govindarajan said. “Our study presented a molecular phylogeny based on 18S rDNA sequences, including those from 40 newly obtained thaliacean samples.”

There are approximately 72 described species of thaliaceans classified in three subgroups-–the pyrosomes, salps, and doliolids, all of which are planktonic open-ocean animals that people seldom see. Govindarajan and her colleagues found a close relationship between thaliaceans and other types of tunicates, including sea squirts–bottom-dwelling tunicates that commonly overgrow docks and pilings. “The Thaliacea was monophyletic, indicating that the pyrosomes, salps, and doliolids arose from a common ancestor,” she said. “Within the salp lineage, we unexpectedly found the cyclosalp group to be closely related to another salp lineage, despite many morphological and behavioral differences. We also were able to clarify the uncertainty around the salp Weelia (Salpa) cylindrica. Previous work suggested that this species was closely related to species in the genus Salpa, but our results strongly indicated that it is distinct and warrants placement in a separate genus.”

Previous tunicate studies have been based on18S rDNA sequences, but thaliaceans were very poorly represented, Govindarajan said. “There are relatively few thaliacean specialists, and specimens are difficult to obtain and identify. Better thaliacean representation allowed us to make new insights on evolutionary relationships both within the Thaliacea and between thaliaceans and other tunicates.”

The research was funded by the National Science Foundation’s Biological Oceanography Program.