Which Ads Are Winners? Your Brain Knows Better Than You Do

Advertisers and public health officials may be able to access hidden wisdom in the brain to more effectively sell their products and promote health and safety, UCLA neuroscientists report in the first study to use brain data to predict how large populations will respond to advertisements.

Thirty smokers who were trying to quit watched television commercials from three advertising campaigns, which all ended by showing the phone number of the National Cancer Institute’s smoking-cessation hotline. They were asked which commercials they thought would be most effective; they responded that advertising campaigns “A” and “B” would be the best and “C” would be the worst.

The UCLA researchers also consulted experts who work in the anti-smoking field and who have been involved in creating anti-smoking advertisements. These experts agreed that campaigns “A” and “B” were the best and “C” was the worst.

While the smokers watched the advertisements, they underwent functional magnetic resonance imaging (fMRI) brain scans at UCLA’s Ahmanson–Lovelace Brain Mapping Center, and the neuroscientists focused on part of the medial prefrontal cortex — located in the front of the brain, between the eyebrows — a region that they have found to be especially important in previous persuasion studies. 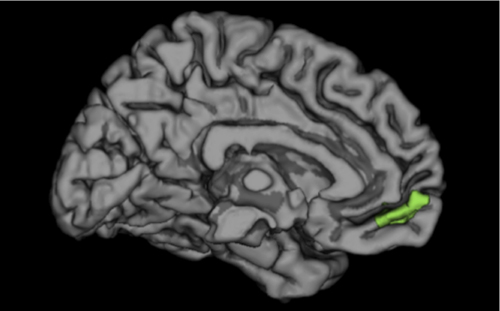 The brain, with the medial prefrontal cortex highlighted in green. Image credit: University of California

“The medial prefrontal cortex predicted ‘C’ would be the best, ‘B’ would be second best and ‘A’ would be the worst — essentially the opposite of what the experts and the participants told us they thought would happen,” said the study’s senior author, Matthew Lieberman, a UCLA professor of psychology and of psychiatry and biobehavioral sciences.

“We didn’t expect how radically different people’s predictions would be from the predictions we made based on their brain activity,” said Lieberman, one of the founders of social cognitive neuroscience. “We had people telling us one thing and this brain region telling us something diametrically opposed.”

Initially, Lieberman and first author Emily Falk, an assistant professor of communication studies and psychology at the University of Michigan–Ann Arbor, were concerned when they saw the results from the medial prefrontal cortex.

“We were hoping the brain data would add something to the self-reports of our participants,” Lieberman said. “Given how different they were from one another, we were afraid our brain data might not end up predicting the real-world outcomes at all.” 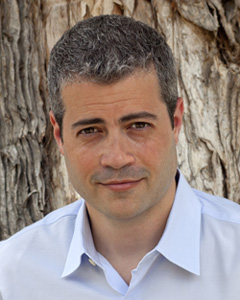 Activity in the medial prefrontal cortex predicted which ads persuaded more people to call the hotline significantly better than the smokers’ own thoughts about how successful the ads would be.

The research is published this month in the online edition of the journal Psychological Science, the premier journal for psychological science research, with print publication to follow.

What are the implications for the advertising industry, which often relies, at least partly, on unscientific focus groups?
“If people are making decisions based on what focus groups tell them, here’s an important brain region saying, ‘No, spend your money a different way,'” Lieberman said. “If I were deciding on an advertising campaign, I would want to know which ads are activating this region the most — that is where I would want to spend my money.”

This new research represents “the first thing you could call a neural focus group,” Lieberman said.

One reason focus groups can be misleading, he said, is that people often do not know what motivates their own behavior.
“Our brain is built to generate reasons for our actions,” Lieberman said, “and we think the reasons we come up with must be true. We believe our own reasons with an intensity that is out of proportion to their accuracy. In this study, we are bypassing people’s self-reports and getting at a form of hidden wisdom in the brain.

“We wanted to determine what kind of brain activity serves as the catalyst between people seeing a message and whether they actually change their behavior,” he said. “This is the region we identified. We have tested it multiple times, and each time, it has been successful.”

John Wanamaker, a 19th-century U.S. department store pioneer, famously said he wasted half the money he spent on advertising, but “the trouble is I don’t know which half.” Many people since Wanamaker have hoped to predict which advertising campaigns will succeed or fail before committing their advertising dollars.

“We’re too late for Wanamaker, but now we have a method for figuring out which ads will succeed,” Lieberman said.

The 30 smokers in the study were between the ages of 28 and 69; half were female.

Brain regions associated with thinking analytically have not been consistently associated with whether people change their behavior in these studies, Lieberman said. The medial prefrontal cortex is associated not with analytical thinking but with self-reflection — thinking about our own identity as well as what we like and do not like.

“Persuasive advertising seems to be about getting to people’s hearts and their identity,” Lieberman said. “We are just at the beginning of this line of research. There are many more questions than answers, but the initial results have been promising.”

In research Lieberman and Falk published in the Journal of Neuroscience in 2010, greater activity in the same medial prefrontal region was predictive of who would increase their sunscreen usage after seeing persuasive messages about daily sunscreen use.

“We knew from prior studies that this brain region predicted people’s behavior change in response to a persuasive message,” Lieberman said.

With the new study, Lieberman and his colleagues wanted to know whether they could predict not only people’s own behavior but use these brain responses to predict how effective advertisements would be throughout the country.

Persuasion research has many applications, Lieberman noted, “including how teachers can communicate better so their students won’t tune out and how doctors can convince patients to stick to their instructions. We all use persuasion in some form or another every day.”