When People Worry About Math, the Brain Feels the Pain

Mathematics anxiety can prompt a response in the brain similar to when a person experiences physical pain, according to new research at the University of Chicago.

Using brain scans, scholars determined that the brain areas active when highly math-anxious people prepare to do math overlap with the same brain areas that register the threat of bodily harm—and in some cases, physical pain. 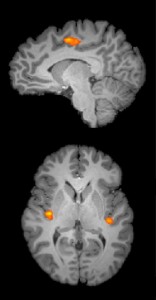 UChicago researchers have found that the higher a person’s anxiety about math, the more anticipating math activated areas of the brain related to experiencing pain. Image courtesy of Sian Beilock

“For someone who has math anxiety, the anticipation of doing math prompts a similar brain reaction as when they experience pain—say, burning one’s hand on a hot stove,” said Sian Beilock, professor of psychology at the University of Chicago and a leading expert on math anxiety.

Surprisingly, the researchers found it was the anticipation of having to do math, and not actually doing math itself, that looked like pain in the brain. “The brain activation does not happen during math performance, suggesting that it is not the math itself that hurts; rather the anticipation of math is painful,” added Ian Lyons, a 2012 PhD graduate in psychology from UChicago and a postdoctoral scholar at Western University in Ontario, Canada.

The two report their findings in a paper, “When Math Hurts: Math Anxiety Predicts Pain Network Activation in Anticipation of Doing Math,” in the current issue of PlOS One.

For the study, the scholars worked with 14 adults who were shown to have math anxiety based on their responses to a series of questions about math. The questions gauged one’s anxiety when receiving a math textbook, walking to math class or realizing math requirements for graduation. Additional tests showed that these individuals were not overly anxious in general; instead, their heightened sense of anxiety was specific to math-related situations.

The study volunteers were tested in an fMRI machine, which allowed researchers to examine brain activity as they did math. Volunteers were given mathematics equations to verify — for example, the validity of the following equation: (12 x 4) – 19 = 29. While in the fMRI scanner, subjects were also shown short word puzzles. For these puzzles, people saw a series of letters (for example: yrestym) and had to determine if reversing the order of the letters produced a correctly spelled English word.

The fMRI scans showed that the anticipation of math caused a response in the brain similar to physical pain. The higher a person’s anxiety about math, the more anticipating math activated the posterior insula—a fold of tissue located deep inside the brain just above the ear that is associated with registering direct threats to the body as well as the experience of pain. Interestingly, math anxiety levels were not associated with brain activity in the insula or in any other neural region when volunteers were doing math.

The work by Lyons and Beilock suggests that, for those with math anxiety, a painful sense of dread may begin long before a person sits down to take a math test. Previous research has shown that highly math anxious individuals tend to avoid math-related situations and even math-related career paths. The current work suggests that such avoidance stems in part from painful anxiety.

The current work is also consistent with other research from Beilock and Lyons, in which they showed that the mere anticipation of doing mathematics changes functioning in the brains of people with high levels of math anxiety. Beilock’s work, supported by the National Science Foundation and the Department of Education, has also shown that mathematics anxiety can begin as early as first grade, and that female elementary school teachers often transmit their math anxiety to their female students.

This latest study points to the value of seeing math anxiety not just as a proxy for poor math ability, but as an indication there can be a real, negative psychological reaction to the prospect of doing math. This reaction needs to be addressed like any other phobia, the researchers said. Rather than simply piling on math homework for students who are anxious about math, students need active help to become more comfortable with the subject, Beilock said. Beilock’s work has shown, for instance, that writing about math anxieties before a test can reduce one’s worries and lead to better performance.

Beilock is the author of the best-selling book about stress and performance, Choke: What The Secrets Of The Brain Reveal About Getting It Right When You Have To.