When danger is in the eye of the beholder

UCLA anthropologists study how, why we read into potential peril

They went boating alone without life vests and gave no thought to shimmying up very tall coconut trees.

And although they were only figments of a writer’s imagination, the fictional adventurers helped provide new insight into how humans, especially men, gauge the threat of a potential adversary. Those reading the stories — dozens of residents of a small village on the Fijian island of Yasawa — judged the characters to be risk-seekers.

But more surprisingly, the Fijians imagined the characters to be significantly taller and more muscular than more cautious characters they read about in other stories. In fact, they estimated that the risk-seeking characters would be 17 percent taller than characters who were sticklers for boating safety and got their coconuts from shorter palm trees.

The study, published in the January issue of the scholarly journal Evolution and Human Behavior, is part of a body of research emerging from the lab of UCLA anthropologist Daniel Fessler. Fessler’s studies, published over the past two years, have identified a mental mechanism people use to subconsciously gauge threats posed by others. The mechanism translates the magnitude of the threat into the same dimensions used by animals to size up their adversaries — size and strength — even when these dimensions have no actual connection to the threat.

“Unless we consider the bigger picture, there’s nothing about boating alone that should make you think that an individual is larger or stronger, yet you do,” Fessler said. “In choosing between fight and flight, we rely on a little picture in our heads that adjusts the size of every potential foe we encounter according to how formidable he seems to us to be. The more likely we believe the individual is to win a fight, the bigger and stronger he seems to us.” 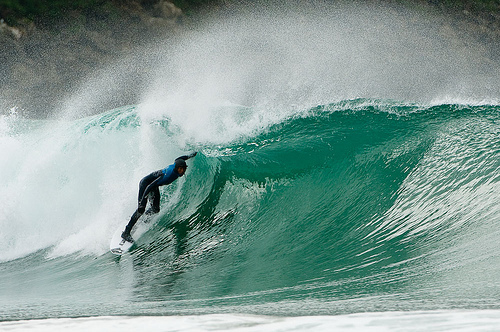 An associate professor of anthropology in the UCLA College of Letters and Science and director of the UCLA Center for Behavior, Evolution and Culture, Fessler specializes in integrating anthropological, psychological and biological theories and methods to explore little-understood aspects of human behavior, experience and health.

Fessler has already published six papers on the subject and has one more in press. Funded by the Air Force Office of Scientific Research, the work illuminates how people make decisions in situations where violent conflict is a possibility, which could have ramifications for law enforcement, the prison system and the military.

“There’s an old system in our brains that’s used when we decide whether to be physically aggressive and it’s a very efficient shortcut to gauge danger, but it can mislead us,” said Colin Holbrook, a postdoctoral fellow in the lab.

In the study’s first phase, Fessler and Holbrook presented Americans with descriptions of two men — one who participates in several dangerous sports including freestyle motorcycling and big-wave surfing, and another who is so risk-averse that he can’t bear to even watch big-wave surfing. The respondents consistently perceived the daredevil to be taller and stronger than the man who avoided the extreme sports.

To ensure that the effect wasn’t unique to American culture, the team also assessed perceptions of risk-seeking behavior among men on the Fijian island, where one of Fessler’s graduate students happened to be conducting research at the time. The team even tested whether there was an actual correlation between height, muscularity and risk-seeking behavior in the U.S., but found none.

“Risk-prone behavior doesn’t have a literal connection to size and strength, yet is conceptualized in those terms,” Fessler said. “Risk-prone individuals make for dangerous enemies — if someone isn’t worried about getting hurt or dying, he’s someone you don’t want to mess with.”

The influence of weapons — and parenthood

The project’s earliest study, published in April 2012, similarly found that an individual was judged to be larger and stronger simply by virtue of the danger he posed — even when the judgment made no literal sense. Hundreds of men and women were asked to estimate the height and strength of an individual based only on photographs of his hand holding a range of objects, including a caulking gun, electric drill, large saw, handgun and kitchen knife. The pistol-packers and knife-holders were judged to be significantly taller and stronger than the men holding the other items.

“With little information we leap to dramatic conclusions about another person’s formidability,” Fessler said. “We give people unadulterated information and automatically people are making inferences that paint a portrait about how big and strong someone is, and whether to avoid him based on the danger he poses.”

Surprisingly, the lab also has found that how we perceive danger is strongly influenced by our own characteristics. In its latest study, Fessler’s group found that parents are particularly likely to inflate the danger posed by a potential foe, conceptualizing this danger in terms of his size.

For the study, which the journal Evolution and Human Behavior published online Dec. 18, Fessler and his team told a scary story to three different types of subjects: non-parents who imagined themselves to be alone, and parents and non-parents who imagined themselves to be accompanied by a child. The 609 subjects were asked to imagine themselves in a deserted parking lot at night, shadowed by a mysterious stranger who caught up with them and took hold of one of their shoulders from behind. Afterward, they were asked to estimate the stranger’s height. Parents’ estimations averaged an inch taller than those of non-parents. In addition to inflating the stranger’s height, parents were also more likely than non-parents to ascribe hostile intentions to him.

“Parenthood changes people in important ways, and one of those ways is to make them more pessimistic about the threat that other people may pose to them,” Fessler said. He believes the adaptation goes back to our ancestral roots when significant injury to a parent might leave children without someone to care for them.

Parenthood isn’t the only force that changes how an individual conceptualizes a potential foe. In an earlier study, Fessler and Holbrook found that people who are incapacitated tend to inflate their estimate of a potential foe’s size. After being tied to a chair or asked to stand on a wobbly elevated platform, subjects were shown a photo of an angry-faced stranger. When they were incapacitated, participants estimated the angry man to be larger and more muscular than they did when they were sitting in the chair unrestrained or standing on terra firma. When asked to indicate their own height on a wall with a laser pointer, they consistently estimated their own height to be significantly shorter than when they were not tied up. The journal PLOS One published the findings in August.

Fessler and Holbrook also have shown that perceptions can run in the other direction, making a potential foe seem smaller and weaker. In a forthcoming article in the journal Human Nature, they report that the stronger a man was, the less muscular he estimated a potential foe to be.

For that research, the team used a dynamometer, a device that measures compression force, to assess the chest strength of 35 male UCLA students and of 43 inhabitants of all ages in the village in Fiji, before gauging their impression of possible threats.

“There’s an aspect of the male mind that men use to assess their own strength, and they use that as a reference point in gauging the threat that other men might pose to them,” Fessler said. “The stronger they actually are … the more they think of their rivals as weak. If they think of rivals as weak, they’re more likely to be aggressive toward them because we’re more likely to pick battles we believe we’re going to win.”

That the phenomenon was observed both at UCLA and in Fiji makes it unlikely that the trend is the byproduct of Western civilization, Fessler said. “This is probably a feature of human nature.”

A study that appeared in Psychological Science in May showed that simply being near one’s friends similarly diminishes the estimated stature of a potential foe. For this research, the team approached 149 men in public settings in Los Angeles. Half were alone when approached; the others were with a male companion. Men in both groups were shown the same photo of a Middle Eastern man holding a gun; the man had been identified in the media as a terrorist. Men who were standing near their buddies estimated the man in the photograph to be significantly shorter and less muscular than did the men who were on their own.

“This suggests that, for men, being in a group unconsciously sends a message that a potential foe is more easily vanquished, which may lead them to be more aggressive toward the individual,” Fessler said.

Fessler and Holbrook hope their continuing research will provide clues to help us better control impulses that once served our ancestors but may be less valuable now.

“We’re carrying around an atavistic response that may bias our reasoning in some contemporary situations,” Holbrook said. “If we understand the inner machinations of our evolved minds, we can make more mindful decisions.”