What Lives in the Sea? – First Census of Marine Life Reveals Thousands of New Species

The Census of Marine Life, a ten-year project to catalog all life in the sea, discovered more than 6,000 new species during its “decade of discovery,” scientists reported as they unveiled its results at a finale event in London Oct. 4-6. The collaboration combined the efforts of scientists from research organizations in more than 80 nations, including the Woods Hole Oceanographic Institution (WHOI).

Census researchers conducted 540 expeditions since the program began in 2000 with the goal of assessing and explaining the diversity, distribution and abundance of marine life around the globe.

“We didn’t have a clue how much diversity there was down there before the Census of Marine Life (CoML) program really got to work,” said Chris German, a marine geochemist at WHOI and Co-Chair of the Biogeography of Deep-water Chemosynthetic Ecosystems (known as ChEss) program—a CoML field project aimed at better understanding and documenting deep-water ecosystems that rely on chemicals for food and energy, rather than sunlight. 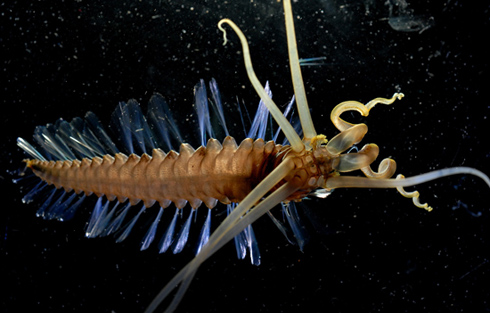 About the image: WHOI biologist Larry Madin led a 2007 expedition to study life in the cold deep water of the Celebes Sea. A treasure trove of new species—including this extraordinary worm known as a “squidworm” because of its squid-like tentacles—resulted from blue water diving and deep-sea ROV observations and collections. Image credit: Larry Madin,Woods Hole Oceanographic Institution

“One of the greatest things about the census program is that it’s brought a real focus on how to marry science and technology,” noted German, who also serves as Chief Scientist for the National Deep Submergence Facility at WHOI.

In October, German led the first expedition to search for deep-sea hydrothermal vents along the Mid-Cayman Rise. Using the newly developed hybrid ROV Nereus, the team identified the deepest known hydrothermal vent site and two additional distinct types of vents, one of which is believed to be a shallow, low-temperature vent of a kind that has been reported only once previously—at the “Lost City” site in the mid-Atlantic ocean.

“This region has the potential to develop into an exciting natural laboratory with plenty of potential for repeat visits and long-term experiments over the decade ahead,” German said. 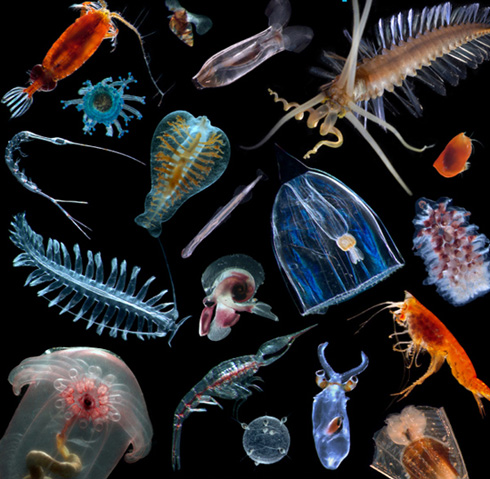 About the image: WHOI researchers Peter Wiebe, Nancy Copley, and Larry Madin joined the effort to find, identify, and analyze indicator genes of the world’s animal plankton, known as the Census of Marine Zooplankton (CMarZ). CMarZ is one of more than 17 research projects within the Census of Marine Life, a ten-year project to catalog all life in the sea. Image credit: Woods Hole Oceanographic Institution

During a landmark CMarZ cruise in April 2006 across the tropical Atlantic Ocean, a team of scientists led by WHOI biologist Peter Wiebe collected more than 1,000 shrimp-like creatures, swimming snails and worms, and gelatinous animals, including many species never seen before.

While still at sea, experts in taxonomy (the classification of organisms) identified captured species under microscopes while researchers sequenced their genes to create unique DNA “bar codes.” During the cruise, researchers identified more than 500 species, and an onboard automated DNA sequencer produced barcodes for more than 100 species.

“Genetic bar codes are a big step forward,” Wiebe said. “We are providing the stepping-stones so future generations can use the results of this project as a benchmark to measure at a glance how ecosystems are changing in the future.”

Larry Madin, a biologist and the Director of Research at WHOI, led a 2007 expedition to study life in the cold deep water of the Celebes Sea, located east of Borneo, north of Sulawesi, and south of Zamboanga. Using a deep-diving ROV, the group found new species of worms and ctenophores, or comb jellies.

Results from all Census of Marine Life cruises are entered into the newly-created Ocean Biogeographic Information System (OBIS) database, the world’s largest open access, online repository of spatially referenced marine life data. The data are also shared with the Encyclopedia of Life, the World Register of Marine Species, and the Marine Barcode of Life, and Catalogue of Life projects.

In addition to providing a baseline picture of ocean life—past, present, and future—data gathered by CoML will be crucial to forecasting, measuring, and understanding changes in the global marine environment, as well as improving the management and conservation of marine resources.

Funding for the Census of Marine Life project came from the Alfred P. Sloan Foundation, WHOI’s Ocean Life Institute, NASA’s ASTEP program, the National Science Foundation, and NOAA’s Office of Ocean Exploration, as well as from many other government agencies, private foundations, institutions and corporations around the world.