The new work, entitled “The Order of the Spheres,” is expected to be completed by Oct. 11.

The artist is Roberto Juarez, whose paintings are often described as emotionally based abstraction. He has done an extensive list of public commissions, including a sprawling piece that wraps around a Grand Central Station waiting room. His works are displayed in the Metropolitan Museum of Art, the Denver Art Museum, and the Miami Art Museum, among other places. At U-M, several hang at the Ross School of Business and in the Lurie Biomedical Engineering Building.

College of Engineering officials approached Juarez because they saw wind in his paintings, the artist said.

“And that’s something I’ve always seen in them,” he said. “That’s one of the ways I know it’s a good painting—if it has wind in it, movement, a life force coming through.” 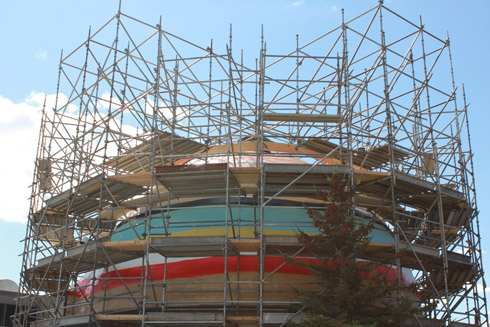 He overlays the variegated backdrop with clustered and single hand-drawn circles, some intersecting or bisected. The stripes’ colors fade or change within the circles and at their intersections, creating a sense of depth and motion. These overlapping circles represent velocity and the fourth element: wind.

The painting and the shape of the canvas call for the movement of the viewer as well. The dome was a welcome challenge for Juarez, who had never done a three-dimensional space.

“It’s not just a flat painting,” he said. “You have to look around it. Students, teachers and all sorts of people will be traveling across it by car and foot and at every different angle, there’s a different view.” 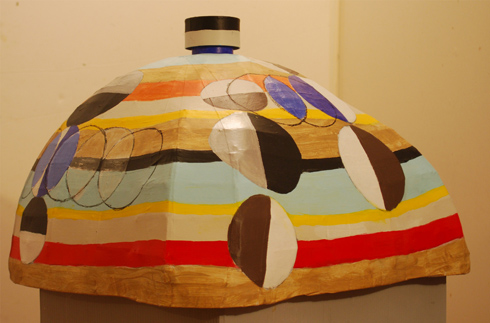 About the image: A model of the dome, from the side. Image credit: Roberto Juarez.

Juarez drew inspiration in part from the stupas of India—sacred mound-shaped structures believed to enlighten those who walk their perimeter.

“I took from stupas the idea of traveling around a structure to understand it,” Juarez said.

The artwork also echoes pottery. The building has a hand-made quality about it that Juarez sought to celebrate. Its plaster finish is rough and its shape imperfect. The glossier stripes accentuate this authenticity.

The mural gave Juarez the opportunity to connect his more recent geometry-based studio work with his public work, he said. Previous public commissions have been nature-based, though they do contain abstract elements.

U-M’s North Campus and the College of Engineering have a large collection of works from renowned artists.

“This new addition underscores the College’s commitment to integrating art and creativity into the campus environment—a value that runs deep,” said David Munson, the Robert J. Vlasic Dean of Engineering. “At Michigan Engineering, we have a culture that celebrates and encourages creativity in all its forms.”

“This is about science and art coming together,” Juarez added. “It’s special and rare that an engineering school would ask an emotional abstraction artist to interface with a technical building like this.”

The building, built in 1955, is part of a complex of three supersonic wind tunnels that is regularly used for aerospace engineering education and research such as testing models of supersonic aircraft. The dome is a “dry air storage facility” that houses a hot air balloon where air is stored before being dried and sucked through one of the tunnels by an adjacent vacuum.

The installation is being done by Steve Seebohm and his company Blue Water Studio, of Petoskey, Mich.