As debate increases about whether female lacrosse players should wear headgear, a new study reports measurements of the accelerations that stick blows deliver to the head. The study also measured the dampening effect of various kinds of headgear.

PROVIDENCE, R.I. [Brown University] — Lacrosse players swing hard, which is why errant stick blows are the leading cause of concussion in girls’ and women’s lacrosse. In a new study, researchers measured how much the worst blows accelerate the head and how much different kinds of headgear could reduce those accelerations.

Girls’ and women’s lacrosse is a different game from the version played by males, said Joseph Crisco, the Henry Frederick Lippitt Professor of Orthopaedic Research in the Alpert Medical School of Brown University and a researcher at Rhode Island Hospital. Females wear far less protective equipment than males do, and injuries — especially severe head injuries — are comparatively rare. But recently the debate about whether female players should wear headgear has gained prominence.

“The goal of our study was to answer the question of what types of head accelerations would you see if you were hit in the head with a stick,” said Crisco, who used to coach his daughters in girls lacrosse and also sits on the Sports Science and Safety Committee of US Lacrosse, the national governing body of lacrosse. 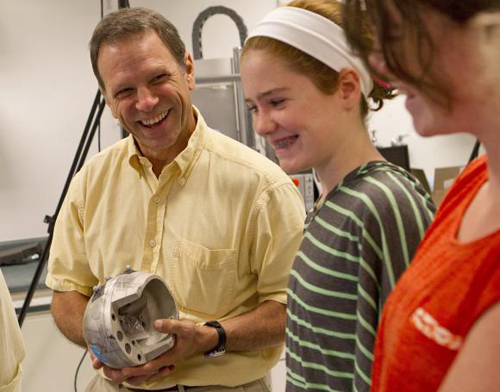 LAX lab. Trey Crisco invited lacrosse-playing girls to the lab to measure the impact of their blows as they whacked the head of a laboratory dummy — and to evaluate the performance of protective headgear. Photo credit: Mike Cohea/Brown University

To conduct the study, published online in the Journal of Applied Biomechanics, Crisco’s team asked seven female lacrosse players aged 12 to 14 to deliver at least 36 whacks each, as hard as they possibly could, to various places on two dummy headforms in the lab.

“The kinds of hits recorded were basically aggressive street fights,” Crisco said. “They were really whacking at it, every shaft was broken by the end of the study, which would never happen in a game. The goal was just to give US Lacrosse and the manufacturers some baseline information on the types of accelerations they could expect to see in a worst-case scenario.”

They used six different sticks, each outfitted with motion capture markers. The headforms had embedded accelerometers. In a second set of experiments the headforms donned one of four different kinds of protective headgear.

On average across 508 successful blows in the first experiment, the girls swung their sticks about 18 miles an hour, enough to complete two revolutions in less than a second. (One of Crisco’s prior studies showed, perhaps not surprisingly, that high school and college players swung their sticks even faster). The peak acceleration the girls delivered to the headforms when they struck them with the shafts of their sticks averaged 60 times the acceleration of Earth’s gravity (60g).

That’s about three times more force than, say, football players with the kind of celebratory head butt that teammates exchange after a big play, Crisco said.

Coming to blows. The girls delivered peak performance averaging 60 times the acceleration of Earth’s gravity (60g) when they struck the headforms with their lacrosse sticks.

The second set of experiments examined what effect headgear might have on the girls’ harder whacks (those with speeds around 23 miles an hour). Crisco’s team measured the accelerations delivered by 20 whacks from the shaft of each volunteer’s stick on both the back and the side of each headform. The headforms wore either nothing, a hard-sided men’s lacrosse helmet, a rugby scrum cap, mixed martial arts headgear, or soft headgear designed for girls’ and women’s field hockey and lacrosse.

Headgear, therefore, significantly reduced head accelerations. But Crisco cautioned against a run on headgear at the sporting goods store based on the study.

Generally research has shown that helmets do not protect against concussion — only against skull fractures and traumatic brain injury. Indeed very little data connects accelerations to concussion risk, and individual susceptibility varies widely. Though some research hints at a figure around 100g, only the hard-sided men’s helmet brought accelerations for blows to the back significantly below that figure. And in many game situations, given how little other protective equipment female players wear, Crisco said, a hard-sided helmet could easily cause more injuries that it prevents.

“It could actually make the game more aggressive,” Crisco said.

In addition to Crisco, the study’s other authors are Laura Costa, Ryan Rich, Joel Schwartz, and Bethany Wilcox.

US Lacrosse and the National Operating Committee on Standards for Athletic Equipment funded the study.