A new online portal and smartphone app lets Washington and Oregon residents enter the addresses of their homes, schools, workplaces or kids’ day care centers to check if they’re in harm’s way should a tsunami hit.

Materials available via the tool or phone application can be used to map out evacuation routes for you, your family, employees or students so everyone is ready when danger arises. There’s a way to create a free account so users can map and save multiple locations and evacuation routes in one place.

The tool, being publicized on the heels of the one-year anniversary of the Tohoku, Japan, quake and tsunami, was developed by University of Washington researchers in collaboration with the Oregon Department of Geology and Mineral Industries and the Washington Department of Natural Resources. These departments are responsible for creating maps of tsunami-inundation – or flood – zones which are incorporated into the new tool and app. 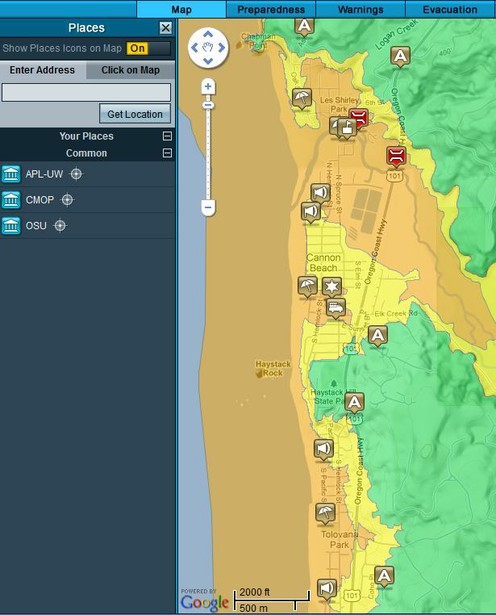 Enter an address or simply use the map to determine if a specific location is in danger of tsunamis following local quakes (yellow) or distant quakes (orange). Maps like this one of Cannon Beach also include info about such things as emergency assembly places ("A") and bridges that should be used only with caution after a quake (red). Image credit: University of Washington

Ideally people who live and work along the coast would use the tools in advance of a tsunami warning, as part of their emergency planning, according to Jan Newton, an oceanographer with the UW Applied Physics Laboratory and lead of the UW-based Northwest Association of Networked Ocean Observing Systems program, where the tool was developed.

In addition to the maps there’s information and resources for before, during and after a tsunami. You can, for example, check the status of tsunami warnings being issued by the West Coast and Alaska Tsunami Warning Center operated by the National Oceanic and Atmospheric Administration. Zoom in and use another feature to display locations of schools, bridges, emergency assembly areas and various local government and emergency buildings. 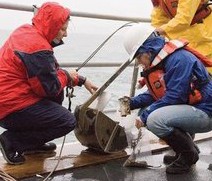 At the portal you can create your own account under “myNANOOS” – NANOOS being short for the Northwest Association of Networked Ocean Observing Systems.

Or you can use the “Places” feature to either enter an address or click on a map to see if that location is in a danger zone. Check out “Brochures” to download evacuation routes and links to emergency services for any of 72 coastal communities.

The maps and evacuation route information has also been integrated into a free smartphone app “TsunamiEvac-N” which is available via iTunes or Android platforms.

Although infrequent, tsunamis are a major threat to both life and property on the Washington and Oregon coasts, Newton said.

Tsunamis that result from distant earthquakes, like the 1964 magnitude-9.2 Alaska earthquake or the 2011 magnitude-9.0 Japan earthquake, can cause damage in the Pacific Northwest as well. When the tsunamis from both of these events reached the shores of Washington, Oregon and Northern California, lives were lost and damage in the tens of millions of dollars occurred in several harbors and bays.

“The collaborative effort between the Northwest Association of Networked Ocean Observing Systems, Oregon Department of Geology and Mineral Industries and the Washington Department of Natural Resources will serve as an important tool in preparing for a potentially catastrophic tsunami event along the Pacific Northwest coast,” said Jonathan Allan, with the Oregon department.