Walking the Walk: What Sharks, Honeybees and Humans Have in Common

A research team led by UA anthropologist David Raichlen has found that the Hadza tribe’s movements while foraging can be described by a mathematical pattern called a Lévy walk – a pattern that also is found in the movements of many other animals.

A mathematical pattern of movement called a Lévy walk describes the foraging behavior of animals from sharks to honey bees, and now for the first time has been shown to describe human hunter-gatherer movement as well. The study, led by University of Arizona anthropologist David Raichlen, was published on December 23, 2013 in the Proceedings of the National Academy of Sciences.

The Lévy walk pattern appears to be ubiquitous in animals, similar to the golden ratio, phi, a mathematical ratio that has been found to describe proportions in plants and animals throughout nature.

“Scientists have been interested in characterizing how animals search for a long time,” said Raichlen, an associate professor in the UA School of Anthropology, “so we decided to look at whether human hunter-gatherers use similar patterns.”

Funded by a National Science Foundation grant awarded to study co-author Herman Pontzer, Raichlen and his colleagues worked with the Hadza people of Tanzania.

The Hadza are one of the last big-game hunters in Africa, and one of the last groups on Earth to still forage on foot with traditional methods. “If you want to understand human hunter-gatherer movement, you have to work with a group like the Hadza,” Raichlen said.

Members of the tribe wore wristwatches with GPS units that tracked their movement while on hunting or foraging bouts. The GPS data showed that while the Hadza use other movement patterns, the dominant theme of their foraging movements is a Lévy walk – the same pattern used by many other animals when hunting or foraging.

The Hadza people of Tanzania wore wristwatches with GPS trackers that followed their movements while hunting or foraging. Data showed that humans join a variety of other species including sharks and honeybees in using a Lévy walk pattern while foraging. (Photo by Brian Wood/Yale University)

“Detecting this pattern among the Hadza, as has been found in several other species, tells us that such patterns are likely the result of general foraging strategies that many species adopt, across a wide variety of contexts,” said study co-author Brian Wood, an anthropologist at Yale University who has worked with the Hadza people since 2004.

“This movement pattern seems to occur across species and across environments in humans, from East Africa to urban areas,” said Adam Gordon, study co-author and a physical anthropologist at the University at Albany, State University of New York. “It shows up all across the world in different species and links the way that we move around in the natural world. This suggests that it’s a fundamental pattern likely present in our evolutionary history.”

The Lévy walk, which involves a series of short movements in one area and then a longer trek to another area, is not limited to searching for food. Studies have shown that humans sometimes follow a Lévy walk while ambling around an amusement park. The pattern also can be used as a predictor for urban development.

“Think about your life,” Raichlen said. “What do you do on a normal day? Go to work and come back, walk short distances around your house? Then every once in a while you take these long steps, on foot, bike, in a car or on a plane. We tend to take short steps in one area and then take longer strides to get to another area.” 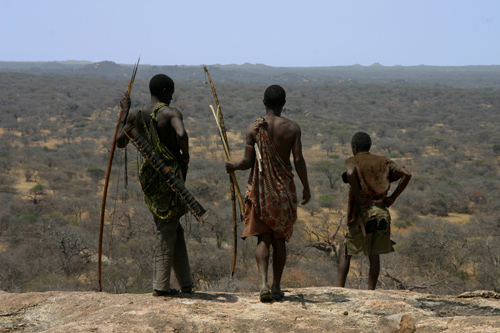 One of the last hunter-gatherer tribes on Earth, the Hadza people of Tanzania still hunt on foot with traditional foraging methods. “If you want to understand human hunter-gatherer movement, you have to work with a group like the Hadza,” said UA anthropologist David Raichlen, who led the study. (Photo by Brian Wood/Yale University)

Following a Lévy walk pattern does not mean that humans don’t consciously decide where they are going, Raichlen said. “We definitely use memories and cues from the environment as we search,” he explained, “but this pattern seems to emerge in the process.”

In future studies, Raichlen and his colleagues hope to understand the reasons for using a Lévy walk and whether the pattern is determined by the distribution of resources in the environment.

“We’re very interested in studying why the Hadza use this pattern, what’s driving their hunting strategies and when they use this pattern versus another pattern,” said Pontzer, a member of the research team and an anthropologist at Hunter College in New York.

“We’d really like to know how and why specific environmental conditions or individual traits influence movement patterns,” added Wood.

Describing human movement patterns could also help anthropologists to understand how humans transported raw materials in the past, how our home ranges expanded and how we interact with our environment today, Raichlen noted.

“We can characterize these movement patterns across different human environments, and that means we can use this movement pattern to understand past mobility,” Raichlen said. “Also, finding patterns in nature is always fun.”