Hacking the Earth’s climate to counteract global warming – a subject that elicits strong reactions from both sides – is the topic of a December special issue of the journal Climatic Change. A dozen research papers include the most detailed description yet of the proposed Oxford Principles to govern geoengineering research, as well as surveys on the technical hurdles, ethics and regulatory issues related to deliberately manipulating the planet’s climate.

University of Washington researchers led the three-year project to gather leading thinkers and publish a snapshot of a field that they say is rapidly gaining credibility in the scientific community.

“In the past five years or so, geoengineering has moved from the realm of quackery to being the subject of scientific research,” said co-editor Rob Wood, a UW associate professor of atmospheric sciences. “We wanted to contribute to a serious intellectual discourse.”

Creating clouds over the ocean that would reflect back sunlight is the subject of a chapter by Wood, whose research is on the interaction among air pollution, clouds and climate. He and co-author Tom Ackerman, a UW atmospheric sciences professor, look at what it would take to test the idea with a field experiment.

“I don’t want to prove it right, I just want to know if it’s feasible,” Wood said. “If you look at the projections for how much the Earth’s air temperature is supposed to warm over the next century, it is frightening. We should at least know the options. Is geoengineering feasible if there were to be what people call a ‘climate emergency’?” 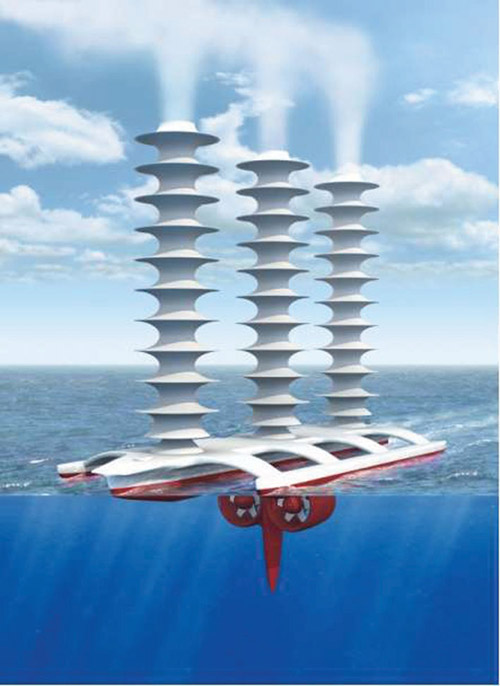 A conceptualized image of a wind-powered, remotely controlled ship that could seed clouds over the ocean to deflect sunlight. Image credit: John MacNeill

Also explored in the journal issue is the idea of injecting reflective particles into the stratosphere, subject of a 2006 paper in Climatic Change by Nobel Prize-winning chemist Paul Crutzen and central to Seattle entrepreneur Nathan Myhrvold’s proposed StratoShield. Yet another idea is iron fertilization of ocean microbes, though Wood said preliminary tests suggest this is not as successful at drawing carbon dioxide out of the atmosphere as its proponents had originally thought.

How to govern geoengineering is a topic of hot debate. In one paper, U.K. authors flesh out the so-called Oxford Principles, which suggest how geoengineering could be regulated as a global public good. The five principles described in the paper concern the research, publication, assessment and deployment of geoengineering techniques.

Many of the authors spoke at the UW during a 2011 seminar series, and more attended a 2012 workshop where they developed their paper ideas.

While discussions were civil, Wood said, the contributors didn’t all agree. A UW philosopher questions whether geoengineering can even be described in the Oxford Principles as a global public good.

“Just spraying sulfates into the stratosphere is not the kind of thing that necessarily benefits everyone, so in that sense it seems a mistake to call it a global public good,” said co-editor Stephen Gardiner, a UW philosophy professor who has written a book on ethics and climate change. There are decisions about how to conduct sulfate spraying, he writes, and potential tradeoffs between short-term benefits and long-term risks.

Gardiner also questions whether something should be done in people’s benefit but without their permission, and if accepting geoengineering as a necessary evil ignores other science or policy options.

He’s not the only social scientist to be looking at climate issues.

“A lot of people, from across the academy, are getting interested in the Anthropocene – the idea that we may have entered a new geological era where human influence is a dominant feature, and what that means for various issues,” Gardiner said.

The collection aims to prompt a serious academic discussion the editors say has so far been lacking.

“It’s an interdisciplinary discussion with an emphasis on the research angle – whether and how we should be researching geoengineering,” said co-editor Lauren Hartzell-Nichols, a UW lecturer in philosophy. “We hope it helps people think about this issue in a more interdisciplinary and integrated way.”

The seminars and workshop that led to the issue’s creation were supported by the UW College of the Environment.