For the first time, anyone with access to a computer or Android-based mobile device can help scientists perform this critical research — no financial contribution, passport, or PhD necessary. In fact, volunteers can be asleep, traveling or on a coffee break when they help researchers search for an Ebola cure.

Beginning today, anyone can download a safe and free app that will put their devices to work when the machines would otherwise be idle. With their collective processing power, the computers will form a virtual supercomputer to help The Scripps Research Institute (TSRI) screen millions of chemical compounds to identify new drug leads for treating Ebola. Meanwhile, the devices will remain fully available for normal use by their owners.

This citizen science effort is possible through a partnership with IBM’s World Community Grid, which has been making similar data-driven health and sustainability initiatives possible for 10 years as a free, philanthropic service to the science community. The “Outsmart Ebola Together” volunteer computing project announced today is being run by the Ollmann Saphire laboratory at TSRI, which has mapped the structures and vulnerabilities of the proteins comprising the Ebola virus. 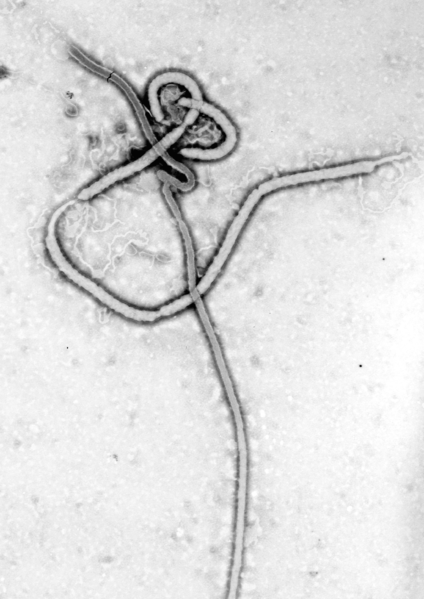 Electron micrograph of the Ebola virus, captured in 1976. For the first time, anyone with a computer or Android-based mobile device can help scientists search for an Ebola cure. A safe and free app from IBM’s World Community Grid (www.worldcommunitygrid.org) puts the devices to work when the machines would otherwise be idle. With their collective processing power, the computers will form a virtual supercomputer to help The Scripps Research Institute screen millions of chemical compounds to identify new drug leads for treating Ebola. An effective treatment has thus far proved elusive because of scant resources previously brought to bear, and because the a protein in the virus responsible for replicating itself adopts different shapes for different functions. (Image credit: Dr. Frederick Murphy, Source: Commons. Wikimedia)

The best candidate compounds that emerge from this crowdsourced effort will be physically tested in the lab to pinpoint their effectiveness against real virus infection. The most promising compounds will then be modified to perform even better, at lower concentrations, and with fewer side effects. Subsequent drug trials could ultimately lead to an approved medicine.

Crowdsourcing this citizen science effort will dramatically accelerate the process of identifying a cure. The speed and scale of a drug search is essential, as this particularly lethal disease continues to spread and mutate. Once believed to be less of a widespread public health risk than other communicable diseases because of its existence in mainly isolated regions, Ebola now carries a higher risk of spreading farther because people are more mobile than ever before.

“Our molecular images of the Ebola virus are like enemy reconnaissance,” said Dr. Erica Ollmann Saphire of TSRI, one of the largest private biomedical research institutes in the United States. “These images show us where the virus is vulnerable and the targets we need to hit. In the Outsmart Ebola Together project, we will be able to harness World Community Grid’s virtual supercomputing power to find the drugs we need to aim at these targets.”

IBM’s World Community Grid has successfully run other projects that search for drug candidates for both high and low-profile diseases — such as AIDS, cancer, malaria, Dengue fever, and influenza. It has enabled multiple breakthroughs, such as helping the Chiba Cancer Center in Japan discover seven new drug candidates to fight childhood neuroblastoma. The IBM-managed program also hosts projects that have led to important scientific advances in renewable energy and water purification technology.

“It is a privilege to partner with The Scripps Research Institute to advance the process of identifying an Ebola cure,” said Stanley S. Litow, IBM’s vice president of Corporate Citizenship and president of the IBM International Foundation. “It is only fitting that IBM’s World Community Grid 10-year anniversary of accomplishments coincide with the launch of perhaps one of the most critical scientific and humanitarian efforts.”

Conceived and managed by IBM, and powered by IBM’s reliable and secure SoftLayer cloud technology, World Community Grid provides computing power to scientists by harnessing the unused, surplus cycle time of volunteers’ computers and mobile devices. The software receives, completes, and returns small computational assignments to scientists. The combined power contributed by hundreds of thousands of volunteers has created one of the fastest virtual supercomputers on the planet, advancing scientific work by hundreds of years.

Nearly three-million computers and mobile devices used by more than 680,000 people and 460 institutions from 80 countries have contributed virtual supercomputing power for vitally important projects on World Community Grid over the last 10 years. Since the program’s inception, World Community Grid volunteers have powered more than 20 research projects, donating more than one million years of computing time to scientific research, and enabled important scientific advances in health and sustainability. IBM invites researchers to submit research project proposals to receive this free resource, and invites members of the public to donate their unused computing power to these efforts at worldcommunitygrid.org.

TSRI also invites members of the public to support Dr. Saphire’s crowdfunding campaign at www.crowdrise.com/CUREEBOLA to secure resources needed to analyze the enormous volume of data generated by Outsmart Ebola Together.

The Scripps Research Institute (TSRI) is one of the world’s largest independent, not-for-profit organizations focusing on research in the biomedical sciences. TSRI is internationally recognized for its contributions to science and health, including its role in laying the foundation for new treatments for cancer, rheumatoid arthritis, hemophilia, and other diseases. An institution that evolved from the Scripps Metabolic Clinic founded by philanthropist Ellen Browning Scripps in 1924, the institute now employs about 3,000 people on its campuses in La Jolla, CA, and Jupiter, FL, where its renowned scientists—including two Nobel laureates—work toward their next discoveries. The institute’s graduate program, which awards PhD degrees in biology and chemistry, ranks among the top ten of its kind in the nation. For more information, see www.scripps.edu.

The software used for screenings in the Outsmart Ebola Together project is called AutoDock and AutoDock VINA, developed by the Olson laboratory at TSRI.

World Community Grid is enabled by software developed in 2002 by Berkeley Open Infrastructure for Network Computing (BOINC) at the University of California, Berkeley and with support from the National Science Foundation. The BOINC project choreographs the technical aspects of volunteer computing.