EAST LANSING, Mich. — A punch. A kick. A hit in the head with a can of soda. It’s not a Three Stooges film but rather the latest trend in advertising, a trend a Michigan State University professor calls “disturbing.”

Advertising professor Nora Rifon recently served as guest editor of the latest edition of the Journal of Advertising which was devoted to advertising and its connection to violence and abuse. The special edition includes nine articles from international researchers on topics ranging from the impact of violence against women in advertisements to potential effects of commercial TV violence on children.

While violence in the media has long been studied, Rifon said this journal edition specifically shows connections between advertising and marketing, and violence – links that have not been shown before. 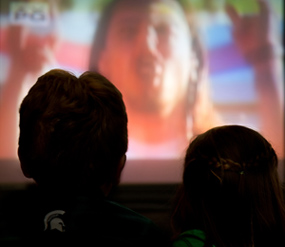 MSU advertising professor Nora Rifon recently served as guest editor of a special edition of the Journal of Advertising which focused on violence in advertising. Rifon said the trend toward more violent ads is "disturbing." Image credit: Michigan State University

Several of the published studies indicate that parents tend to underestimate the impact violent ads can have on their children.

“In one particular study, the researchers found that children watching a violent ad had more aggressive thoughts than those who did not watch the violent ad,” she said. “That’s one study of one exposure. Multiply the number of violent ads children may see every day over a lifetime and the net result could be inestimable.”

Rifon was selected to edit the journal partly because of the work she does with the Michigan Children’s Trust fund, a statewide nonprofit organization dedicated to the prevention of child abuse and neglect, with which MSU has a close partnership.

This journal edition represents the first time that scholars in marketing and advertising have published a significant body of work on the implications of violence in advertising, she said.

“I hope this edition motivates scholars worldwide to conduct more research on this important topic,” she said, “and I hope that the research results in policy discussions on fair practices and standards in the industry.”