Brown University researchers have found that kimchi made without seafood products has the same “probiotic” bacteria as more traditional kimchi.

PROVIDENCE, R.I. [Brown University] —Good news, vegans: A new study finds that kimchi made without fish products has the same type of bacteria as more traditionally made kimchi. That finding suggests that any “probiotic” benefits associated with traditional kimchi could be present in vegan versions as well.

Along with other fermented foods like yogurt and kombucha, kimchi is surging in popularity as a probiotic food — one that contains the same kinds of healthy bacteria found in the human gut. A traditional Korean side dish, kimchi consists mainly of fermented cabbage, radish and other vegetables. But it’s normally made using fish sauce, fish paste or other seafood. That takes it off the menu for vegans, who don’t eat any products derived from animals. But in order to appeal to vegan consumers, some producers have begun making a vegan alternative to traditional kimchi. 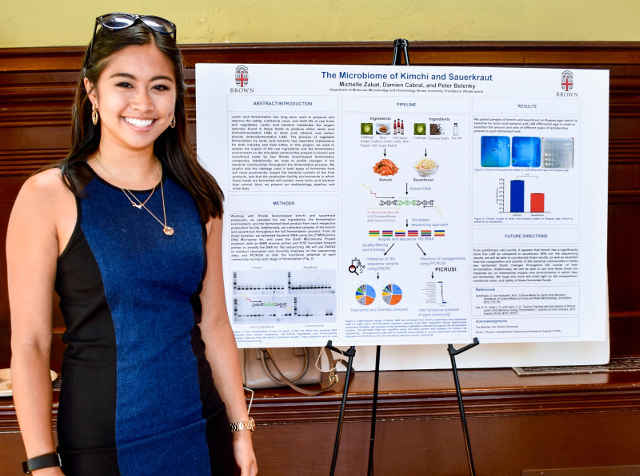 “In vegan kimchi, producers swap in things like miso, which is a fermented soybean paste, in place of the seafood components,” said Michelle Zabat, an undergraduate at Brown University and lead author of the study, which is published in the journal Food Microbiology. “We wanted to know what the effects of making that swap might be in terms of the microbial community that’s produced during fermentation.”

Working in the lab of Peter Belenky, an assistant professor of molecular microbiology and immunology at Brown, Zabat partnered with Chi Kitchen, a Pawtucket, R.I.-based company that makes both traditional and vegan kimchi. The researchers took bacterial samples from the starting ingredients of both kinds of kimchi, as well as samples during the fermentation process and from the final products. The team took additional environmental samples from the factory, including from production tables, sinks and floors. The researchers then used high-throughput DNA sequencing to identify the types of bacteria present.

The study showed that the vegan and traditional kimchi ingredients had very different microbial communities to start, but over the course of fermentation the communities quickly became more similar. By the time fermentation was complete, the two communities were nearly identical. Both were dominated by lactobacillus and leuconostoc, genuses well known to thrive in fermented cabbage. Those bacteria were present only in small amounts in the starting ingredients for both products, the researchers found, yet were the only bacteria to survive the fermentation environment.

That’s not exactly what the researchers expected to see.

“Miso has a lot of live bacteria in it at the start,” Belenky said. “The fact that those bacteria were lost almost immediately during the fermentation was surprising. We thought they’d carry over to the kimchi, but they didn’t.”

That’s likely because bacteria found in the miso thrive in extremely salty environments, and the kimchi isn’t quite salty enough for them. “If we made really salty kimchi,” Belenky said, “we might see them.”

The study looked at only one brand of kimchi, and it’s not a sure thing that the findings will to the same for other brands. In fact, researchers point out that the microbial community that dominated the kimchi they tested closely matched the community in samples taken from the production facility. It’s not clear from this study whether those bacteria in the environment came from the kimchi or the other way around. It’s possible, the researchers say, that the facility provided a “starter culture” that influences the eventual microbial community in the kimchi.

Either way, the findings show that it is indeed possible to make a vegan kimchi that’s remarkably similar in terms of microbes to for kimchi that’s made with more traditional ingredients. The jury is still out on whether consuming probiotics actually makes meaningful changes to the gut microbiome or has any overall health benefits, the researchers say. But to the extent that consumers want products with probiotics and producers want to cater to dietary restrictions, vegan kimchi appears to fit the bill.

Other authors on the paper were William Sano, Damien Cabral and Jenna Wurster, all from Brown University. The work was funded by the National Institutes of Health through a grant to Brown’s COBRE Center for Computational Biology of Human Disease (NIH P20 GM109035), the National Science Foundation (EPS-1004057, 1644760) and a Karen T. Romer Undergraduate Teaching and Research Award (UTRA) from Brown University.