As the Trump administration weighs how to revise fuel economy standards, a new study finds footprint-based rules are less effective and more costly than a flat standard with credit trading.

At the heart of U.S. fuel economy standards currently being evaluated by the Trump administration is one attribute: a vehicle’s “footprint,” measured by the rectangle formed by the four points where a vehicle’s tires touch the ground. The attribute-based footprint standard is used to sort vehicles into bins with different compliance targets, with larger vehicles facing more modest requirements. Some have argued that this system incentivizes automakers to produce bigger vehicles, but there has been little concrete evidence to support this beyond a general trend toward light trucks and SUVs. 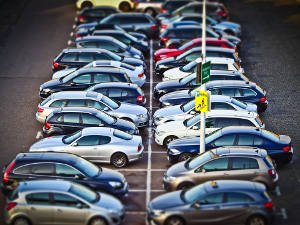 “As automakers like Ford dramatically boost production of their pickups and SUVs, it’s clear that there is more driving their decisions than consumer preferences alone,” said co-author Koichiro Ito, an assistant professor at the Harris School of Public Policy. “Policy plays a substantial role, as our study indicates.”

Ito and his co-author James Sallee, an assistant professor at the University of California, Berkeley, studied Japan’s standards at a time when the government introduced an incentive for vehicles that exceeded their fuel economy target. This policy change—whereby vehicles were judged based on both weight, to be in compliance, and fuel economy, to receive the subsidy—allowed Ito and Sallee to examine how the targeted goal of the policy (i.e. fuel economy) changed relative to the attribute-based scheme (i.e. weight). They compared cars sold in 2008, before the policy change, to those in 2012.

The authors found that the weight-based system incentivized automakers to increase vehicle weight in order to fall into a less stringent compliance category. Ten percent of Japanese vehicles had their weight increased. Among the affected vehicles, the authors estimate that weight rose by 110 kilograms on average.

“Having a flat standard with compliance trading where automakers can trade credits is the best option, improving fuel economy at a low compliance cost,” Ito said. “The U.S. fuel standards already have this trading scheme in place. Making a switch away from the footprint-based system and toward the most efficient policy option can be within reach.”