In the fog chamber, a thick cool mist rolls from one end to the other blurring glasses, wetting caps and coats and sending water dripping down the latest test panel.

University of Washington students have been testing low-cost materials capable of harvesting water from fog in a temporary “hoop house” next to the Botany Greenhouse. They create the fog with a specially adapted power washer and record how much water condenses and drips off various panels of low-cost materials, such as shade cloth.

They specifically want to find a way to help residents on the northern edge of Lima, Peru, where less than half an inch of rain falls, but heavy fogs occur consistently for six to nine months a year. The faculty and students are seeking a way to condense enough water to irrigate new plantings that would, in turn, harvest fog on their own, naturally bringing water into the landscape, said Susan Bolton, a professor of environmental and forest sciences and one of the group’s instructors. 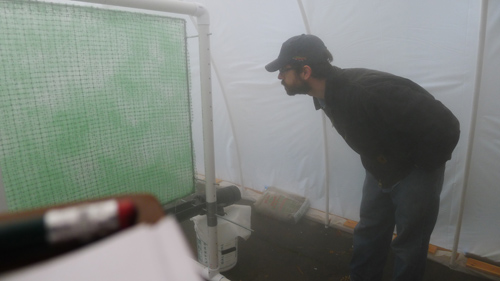 To that end, they are also testing various plants as fog collectors: Vines, for example, because winemaking is a growing industry in Peru and residents might plant vineyards. Or perhaps a city park with trees could be created.

The landscape once had trees that collected fog, but 500 years ago Spanish colonizers denuded Lima’s fog-fed dry forests.

The UW group and 43 other university teams last year competed and each received a $15,000 grant from the Environmental Protection Agency’s P3: People, Prosperity and the Planet program. Teams are developing ideas to make such things as water, energy and agriculture more sustainable in developed or developing countries. In April the groups will send representatives to Washington, D.C., trying to win one of the grants worth up to $90,000 to implement their ideas.

Doug Ewing, who runs the botany greenhouse, heard about the project and helped the group adapt some of equipment used in the greenhouse. He and his crew, for example, use a power washer set-up, but with a different nozzle, in the greenhouse to cool plants when it gets hot.

Humans have long fashioned structures meant to cause dew or fog to condense. Today, for example, the Canadian non-profit FogQuest tries to help communities, particularly in Chile, harvest drinking water. FogQuest says a 48-square-yard fog collector can produce an average of more than 50 gallons per day.

“We hope we improve upon standard fog collection models by finding ways to increase collection rates while decreasing the amount of material used and energy needed by communities to construct and maintain the collectors,” said Peter Cromwell, a graduate student in landscape architecture.

“The UW project wants to take that a step farther by thinking about it as part of larger social, environmental and economic systems,” said Ben Spencer, assistant professor of landscape architecture. “Our focus on fog collection as a source of water for households and irrigation of green space responds directly to priorities expressed by the community. Low-cost systems of fog collection would empower the community to take charge of their own water resources and improve their environment and living conditions.” 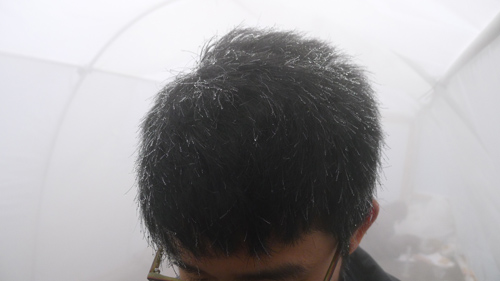 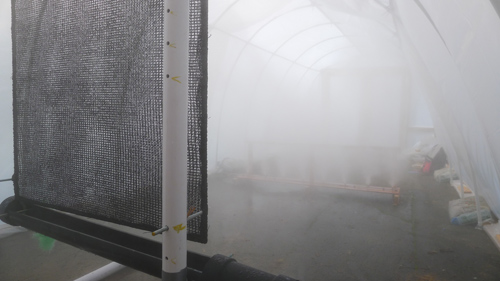 A test panel with black shade cloth at one end of the hoop house is drenched with fog generated by nozzles at the other end. Image credit: P Cromwell/U of Washington 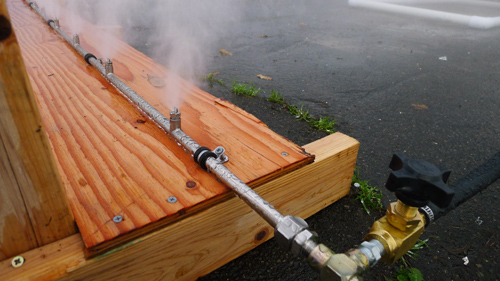 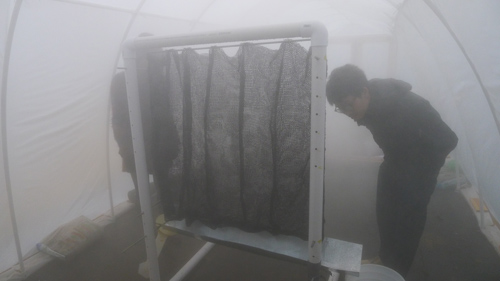 Shu Kuei, master’s student in landscape architecture, checks on a test panel using shade cloth attached like a shower curtain. The students not only evaluated materials but also how screens might be configured for maximum fog harvesting. Image credit: P Cromwell/U of Washington 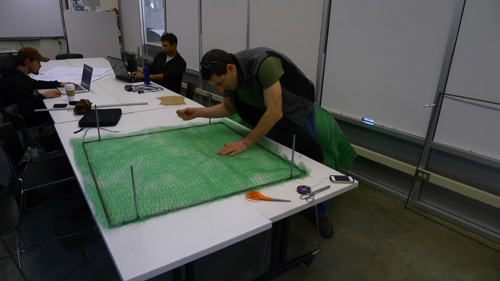 Graduate student Mike Schwindeller pulls fibers out of matting to create another variation to test. Interestingly, when students removed fibers, made it a little less “hairy,” it became a better collector because less water stayed trapped in the matting itself and ran off faster. Image credit: P Cromwell/U of Washington