A University of Washington research team has captured color photographs of what could be a previously undocumented species of chambered nautilus, a cephalopod mollusk often classified as a “living fossil,” in the waters off American Samoa in the South Pacific.

“This is certainly a new taxon, but we are not sure if it is a new species, subspecies or variety,” said UW paleontologist Peter Ward, who led the expedition to Samoa and Fiji.

“The Samoan nautiluses are large for the genus, brightly colored, and very, very rare,” he said. 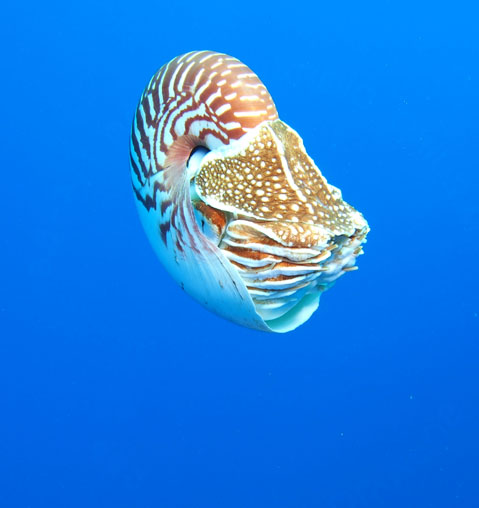 A Samoan nautilus about 2 miles offshore is seen in this photo from February 2013. At this location, the water was about 1,200 feet deep and the nautilus was at a depth of about 75 feet. Image credit: Peter Ward/UW

Tracking and photographing nautiluses to determine their population was a key part of the team’s work, funded by the National Oceanic and Atmospheric Administration and National Marine Fisheries Service, to assess the health of deep-ocean coral reefs.

The expedition included three UW graduate students and two 12-year-olds, Josiah Utsch and Ridgely Kelly of Portland, Maine, who have started their own website (https://savethenautilus.com) to raise money in support of Ward’s conservation work with the chambered nautilus. They also helped fund the expedition, which ended the first week of March.

The expedition spent two weeks in Fiji and three in Samoa, returning to Seattle the first weekend of March. Researchers shot some 200 hours of video of reef systems at depths of 600 to 1,700 feet. The video will be used to assess the size of the nautilus population and potential effects of warming temperatures by comparing current nautilus numbers with records from 25 years ago, Ward said. 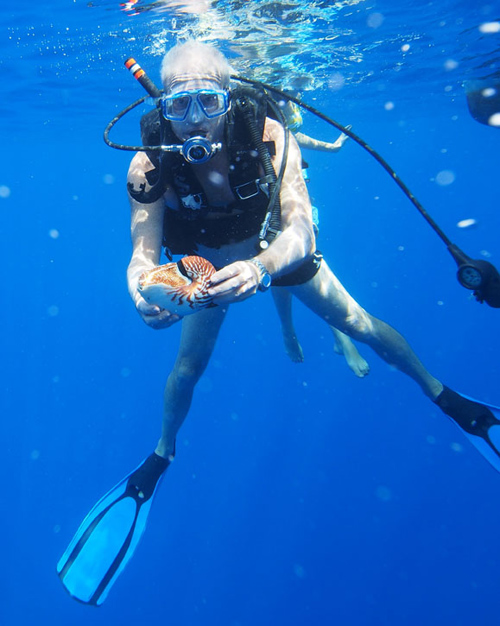 One goal of the research is to determine whether the chambered nautilus should be listed for protection – “Yes, it should,” Ward said – at the next Conference of the Convention on International Trade in Endangered Species of Wild Fauna and Flora, which takes place in three years. (The current conference runs through March 14 in Bangkok, Thailand.)

The chambered nautilus has survived with little change for millions of years. It is found in the tropical waters of the western Pacific and eastern Indian oceans, but its numbers have dwindled substantially in recent years because of environmental factors and from overfishing because of the creature’s prized shell.