Newt Gingrich described for the audience at a recent University of Chicago Institute of Politics event the shock he felt when he realized last Election Day that President Obama would win re-election, confounding Gingrich’s predictions and hopes.

Gingrich said he and his wife Callista stared at each other in disbelief as they took in exit polls and then voting returns that showed a loss beyond anything he had feared, especially among Senate races in traditionally Republican states. It led Gingrich to take a hard look at the tactical and technological gap that may have contributed to his party’s loss.

“The way I describe it is, I’m like a pilot whose plane hit a mountain, and I’m beginning to think we need new radar,” Gingrich said. 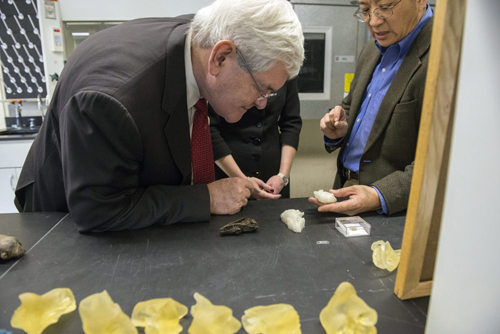 A self-proclaimed amateur paleontologist, Newt Gingrich toured the lab of Zhe-Xi Luo, professor in Organismal Biology and Anatomy and the College. Photo by Robert Kozloff

His UChicago visit was one step in that thought process for Gingrich, former Speaker of the U.S. House of Representatives and a 2012 Republican presidential candidate. He spent the day at the University on Feb. 19, meeting with students and faculty members before taking the stage with David Axelrod, director of the non-partisan Institute of Politics, who shared notes about the 2012 election.

The two spoke at length about the results and consequences of the election and the major policy hurdles facing the United States today. Gingrich expressed his support for the scheduled federal budget cuts known as the sequester, arguing that it might force elected officials to get serious about budget challenges.

“There are moments in life when democracies do things really badly,” he said. “I think we have been messing around with getting spending under control for the last four or five years. Both parties have been playing games. [The sequester] will be a mess, but I think it may be necessary to live through the mess to get to the next stage.

Gingrich also gave credit to Axelrod, who was senior strategist for President Obama’s reelection campaign before joining the University of Chicago in January 2013. He said his party could learn something from the Democrats’ approach to the 2012 election, and he hoped that non-partisan discussions like the Institute of Politics event could help with that kind of growth.

“I think you have a lot to be very proud of,” he told Axelrod, as they spoke in front of more than 600 people at Mandel Hall. “Even if I disagree deeply with what you did with power when you got it, nonetheless your ability to acquire it was very impressive and worth studying.” 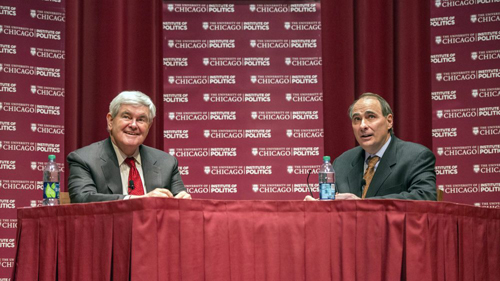 Former Republican presidential candidate Newt Gingrich (left) sat down with David Axelrod, director of the Institute of Politics, on Feb. 19 for a 90-minute conversation about the results and consequences of the 2012 presidential election. The former Speaker of the U.S. House of Representatives also discussed the state of the Republican Party and the major policy hurdles facing the United States. Photo by Robert Kozloff

many stops on uchicago tour

Earlier in the day, Gingrich, a former history professor, visited with students at the Harris School of Public Policy, sat in on an undergraduate Core class and met with College Republicans. A self-proclaimed amateur paleontologist, he also visited the lab of Zhe-Xi Luo, professor in Organismal Biology and Anatomy and the College.

At the meeting with College Republicans, in response to a question about how young Republicans could give their party more traction, he encouraged the students to pick their political fights strategically, be very noisy with their ideas, and to use the most important tool he had learned in politics—“cheerful persistence.”

Gingrich and Axelrod agreed that while Republicans have been more successful than Democrats at the state level in recent years—with 30 Republican governors in office and 24 states with Republicans controlling both the governorship and the legislature—the Republican Party’s national strategy is outdated.

“We have to campaign in the America that actually exists, not the America that existed in 1980,” Gingrich said, citing his party’s disconnect with mainstream voters and changing U.S. demographics. “The minute the Republican Party understands that’s the central challenge and everything else is detail, then you’ll see us start to solve problems rapidly.” 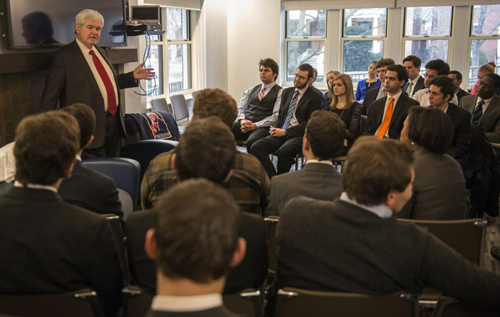 Newt Gingrich met with College Republicans at the Institute of Politics house, encouraging them to pick their political fights strategically, be very noisy with their ideas and to use the most important tool he had learned in politics—“cheerful persistence.” Photo by Robert Kozloff

Beyond the Republicans’ woes, Gingrich said the bigger problem in his view is the stagnation within both parties, with neither one producing big ideas that could help shape the country’s future.

“I would argue the greatest need we have in America today is not better marketing of liberalism or conservatism, it is a decade or more of inventing fundamentally big new solutions,” said Gingrich, adding that whichever party can once again become a party of ideas will lead the country in the future.

In addition to sharing his thoughts on the looming budget sequestration, Gingrich spoke about campaign finance and immigration. He supported the possibility of unlimited individual campaign contributions, which the U.S. Supreme Court is now considering, as long as they are fully disclosed; and maintained that if President Obama allowed Democrats and Republicans in Congress to work on immigration without interference, a deal could be reached as soon as the August 2013 recess.

As Gingrich spoke to Axelrod about other issues he was passionate about, including investments in education and technology innovation, Axelrod remarked that Gingrich and Obama had a surprising amount of agreement on many issues.

“People who are relatively interested in the future have a convergence, even if they start from different places,” agreed Gingrich, saying he had the same experience with President Bill Clinton.