In Kenya, the ease of transferring money via mobile phone has increased incomes in rural areas, enabled small businesses to thrive and reshaped the country’s economy.

Thanks to this mobile money revolution, a taxi driver working in Nairobi can give a local merchant $50 in wages and the cell phone number of his wife in the family’s home village. The wife gets a text message, then goes to a rural merchant who either immediately gives her $48, or distributes some portion of the wages and keeps the rest for her in savings.

But the success of that service — called M-Pesa — has been difficult or impossible to replicate in other parts of the developing world. 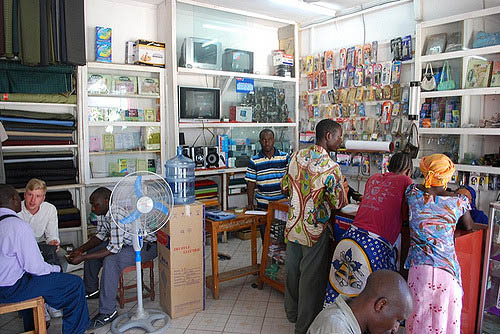 University of Washington computer scientists and engineers, with a grant from the Seattle-based Bill & Melinda Gates Foundation, will develop, test and deploy new technological solutions to make financial products better and more available to the lowest-income people around the world.

“This technology can have tremendous impact — both for allowing people to send remittances from the city back to rural regions, and to establish savings accounts so people can have reserves so that an event like an accident or a pregnancy doesn’t send them over the edge,” said Richard Anderson, a UW professor of computer science and engineering.

With a new $1.7 million, two-year grant awarded by the Gates Foundation in December, the UW Department of Computer Science & Engineering is establishing a new Digital Financial Services Research Group to investigate and overcome technological barriers to widespread adoption of mobile financial services.

Those include protecting money transfers from cyberattack, quickly but securely verifying the identity of users, designing an interface that doesn’t require too many numbers, enrolling and tracking thousands of banking merchants, and developing technologies that will work across different mobile phone platforms in countries with multiple providers.

Kenya’s success, in part, stems from having a single, dominant mobile phone company that operates throughout the country. Sending money from one cell phone provider’s system to another cell phone company introduces technological and logistical complications.

Previous research on mobile money service adoption has largely resided in the social sciences. Applying a computing and technological lens to this type of financial service research is a relatively new piece of the puzzle, Anderson said.

The UW’s computer science and engineering department brings deep expertise in privacy and security. Computer science and engineering professor Tadayoshi Kohno and assistant professor Franziska Roesner — who have uncovered security vulnerabilities in everything from automobile computers to wirelessly reprogrammable pacemakers to online browsing — will be part of the core UW team.

The UW also has a track record in deploying tools that have been widely used in the developing world. The Open Data Kit, for instance, is a set of free, open-source tools that enable mobile data collection and analysis.

Organizations have used Open Data Kit to monitor election fraud in Afghanistan, track agricultural practices in Haiti, survey refugees in Lebanon, and diagnose and map disease in Uganda, among many other applications.

“We’ve been successful in getting a software system out that’s fairly widely used around the world,” said Anderson, who helped develop Open Data Kit. “To build this research group, we’ve identified a set of initial challenges to look at — the security of mobile applications for financial services and the user interface and tools to make it easier to build financial applications.”

Secure, robust mobile money transfers could also simplify distribution of humanitarian funds. A non-governmental organization, for instance, could provide a cell phone company with a list of 10,000 farmers and their phone numbers. Each could receive a $5 voucher for fertilizer via text, which they could redeem at their local agricultural stores.

Over the next two years, the team plans to prototype different technologies and develop a demonstration lab housed at the UW. With the help of those outside partners, the research group will identify technology projects that show potential for large-scale commercialization and warrant further investment.

“The long-term plan is that we’ll work with larger teams and mobile operators on refining the technologies and toolkits so they can be tested and developed in-country,” Anderson said.