In Regina de Luna’s home country of the Philippines, malaria is the eighth leading cause of death, a statistic that the rising Yale senior finds impossible to ignore.

But what has made an even greater impression on de Luna is seeing people suffering from severe complications from the vector-borne disease — especially because malaria is easily preventable.

As a volunteer at a government-run hospital in her country during the past several summers, de Luna has met both pediatric and adult patients with malaria — some with the early-stage symptoms of fever, chills and fatigue, and others whose advanced infection has resulted in life-threatening complications, like coma. Malaria, an infectious disease that is transmitted by mosquitoes, affects more than six million people in the Philippines, where the tropical climate and dense forests are ideal breeding grounds for the insects. 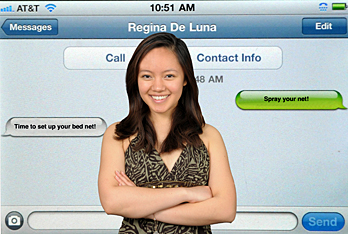 Last summer, while volunteering at a local Philippine hospital, de Luna decided that she had to do something to help prevent malaria in the Philippines, where she lived for nine years before attending college.

“I was inspired by professors and fellow students at Yale, who don’t just talk about problems but go out and do something to solve them,” says de Luna. “I wanted to be able to do the same.”

To learn more about current malaria-prevention efforts, she first talked to officials at the Philippine Department of Health and NGOs that have been active in malaria-control initiatives, as well as the company Shell Philippines. While Shell and various aid organizations send health care workers into rural areas to distribute bed nets and educate the local people about malaria, de Luna kept thinking that there must be an easier and more cost-effective way to help prevent the illness.

“I thought about how the Philippines is known as the ‘texting capital of the world,'” says de Luna. “On average, each person there sends about 600 texts a month. Whether rich or poor, everyone there has access to a cell phone. Since cell phones are so prevalent, I considered that maybe there is a way to use them to educate people about malaria prevention.”

The Yale student began discussing her idea with her peers and professors on campus and with her family. Before long, she worked out a plan for trying it out.

Under her program, two or three text messages will be sent daily to households in remote provinces of the Philippines with high malaria rates. Individuals who enroll in the program are entered into a database. The Yale student partnered with Globe Telecom, one of the leading cell phone service providers in the Philippines, to set up the database and automatically generate pre-programmed text messages communicating malaria-prevention strategies and information about the disease’s symptoms and treatment.

“The great thing about this technology is that by using cell phones and computers, I can be engaged in this effort remotely, from New Haven,” says de Luna, who collaborates with Shell Philippines to write the texts, which are then translated into the local dialect. They include such reminders as “It’s time to hang up your bed nets” and “Don’t forget to get your bed net re-treated with insecticides,” as well as information about the common symptoms of malaria and what people can do if they think they have the disease.

“All of the messages are very simple, but my hope is that when people see them they can internalize them and, hopefully, act on them,” says de Luna.

When she was discussing her text-messaging malaria-prevention plan with others, de Luna says her father raised an important question: “How will you know it’s working?”

The Yale student devised a simple solution: At the end of each week, all of the participants receive a multiple-choice question that tests their knowledge of malaria prevention and symptoms. To give them an incentive to take part, de Luna arranged with Globe Telecom to provide 20 free text messages (the equivalent of 20 pesos or 42 cents) to the first 20 people who answer the question.

“Like the text messages, the quiz questions are very simple ones, such as ‘Which of the following is a symptom of malaria?’ Responders will be given a choice of four symptoms and have to pick the right one. Being able to identify symptoms is really important because sometimes people associate mild malaria symptoms with those of the common cold and don’t seek treatment, which can lead to complications and even death. Other times, people can have symptoms of something other than malaria but insist on being treated even though they don’t have the disease, putting pressure on health care workers. Taking malaria medication when you are not sick can be equally bad because it can create resistance to malaria drugs,” she says.

“This kind of quiz scheme makes use of a tactic that companies often use to promote their products, only I’m using it for a different cause,” continues de Luna. “In a country where people text each other all the time, who wouldn’t want 20 pesos of free text messages?”

Eventually, de Luna hopes to expand the program to more areas of the Philippines and possibly use it as a platform to develop a health information network for the country.

A biology major, de Luna is interested in the intersection of science and public health in underserved areas. At Yale, she serves as the co-chair of Yale Medical Professions Outreach and has been a volunteer at the Haven Free Clinic in New Haven’s Fair Haven neighborhood. In addition to launching her malaria-prevention program in the Philippines, she — in partnership with the education department of the clinic — is working on a program to lower the incidence of diabetes and chronic disease in the low-income community of Fair Haven through education and counseling.

“I have a passion for health education,” de Luna says. “My experience in the Philippines shows me that sometimes making a difference doesn’t require huge resources but, rather, just well-thought-out strategies.”

The Yale student’s interests also include neurobiology. On campus, she has been investigating brain development, specifically axon guidance, while working in the laboratory of Elke Stein, assistant professor of molecular, cellular and developmental biology and of cell biology. Of her experience working in Stein’s lab de Luna says, “Elke is a mentor who truly cares about undergraduates. She has taught me that basic science research is more than just techniques. It is knowing how to troubleshoot difficult problems and being able to think outside the box to find novel solutions.” These are skills de Luna has drawn on working on her many projects, including the malaria initiative.

Named one of 30 Clinton Global Initiative University honorees who are helping to change the world, de Luna was invited to present her initiative at a conference this past spring in San Diego. She was unable to attend the event because the Yale men’s lightweight crew team — for which she is a coxswain — had a race. She hopes she’ll have the opportunity to attend the conference next year.

Last year, de Luna’s lightweight boat entered into a heavyweight event and ranked seventh in the nation. “Crew has been a wonderful experience for me, and the Y150, as the team is affectionately called, is a unique program that does not just create top rowers but also men and women of character,” says de Luna, noting that the varsity boat won a national championship this year. “I am continually inspired by the dedication of the rowers and the leadership of [head coach] Andy Card.”

She won’t travel back to the Philippines until the end of her summer break, but de Luna says she looks forward to her stay in her home country, which has occupied so much of her planning and thoughts over the past year.

“It’s been a year of hard work for me, but I look forward to the next stage of my malaria prevention program,” de Luna says. “This is just the start. There is still a lot to be done.”